Wembley, Alta, incorporated as a village in 1928 and as a town in 1980, population 1383 (2011c), 1443 (2006c). The Town of Wembley is 23 km west of GRANDE PRAIRIE on Highway 43. Wembley was subdivided as a townsite by the Edmonton, Dunvegan & British Columbia Railway when it arrived there from Grande Prairie in 1924. With this, the existing community of Lake Saskatoon, 7 km north, went into decline, with many businesses and people moving to Wembley. The community was named for a suburb of London, England, where a major international exposition was then being held. It is in the middle of a rich agricultural district, which has produced many award winning farmers over the years, including Herman Trelle, 5 time world's wheat king at the international agricultural exposition in Chicago.

In the late 20th century the economy of Wembley was bolstered by natural gas reserves and the town's status as a bedroom community of Grande Prairie. 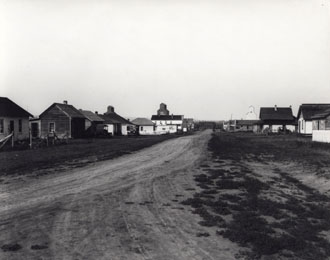 Wembley lies in the middle of a rich agricultural district, which has produced many award winning farmers over the years (courtesy Glenbow Archives/ND-3-5359).