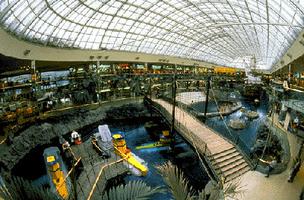 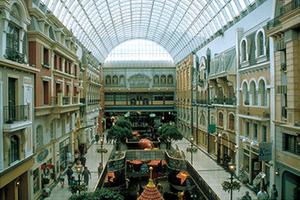 The West Edmonton Mall (WEM), once promoted as the "Eighth Wonder of the World," is a leading tourist attraction in central Alberta. The WEM covers 49 hectares and encloses 493 000 square metres of space - the equivalent of 104 football fields. For 24 years it was listed in the Guinness Book of World Records as the world's largest shopping centre.

The WEM remains the largest shopping centre in North America. It was among the first shopping centres to offer a wide range of amenities, from water parks to themed streets - attractive at any time of year but particularly during winter. These amenities attracted visitors to walk and gawk, then stop and shop. The WEM's massive and essentially anti-urban form generated strong opinions from the residents of Edmonton, both positive and negative, about the presence of such a behemoth in their community.

The Mall was developed by the Triple Five Corporation, owned by the Ghermezian family of Edmonton. No strangers to local controversy, the Ghermezian brothers came under the international spotlight with the development of the WEM. Designed by Maurice Sunderland Architects Inc and the structural engineering firm of Abugov & Associates, the WEM developed over 4 phases, begun in 1981 and completed in 1998. 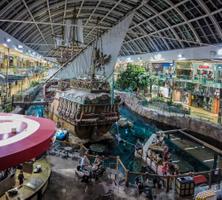 The WEM displays the standard architectural style for malls of the period: blank exterior walls of precast concrete facing large expanses of parking. The buildings are completely inward looking, with signage as the only expression on the exterior. The structure of the WEM is steel throughout, with a clear-span glazed dome roof of 400 x 100 feet, carried on 2-foot-deep steel-plated curved roof beams.

Most of the interior of the WEM is also standard for the time: long corridors of circulation lined with a variety of retail outlets. The majority of the stores belong to large national chain operations, and many are to be found 3 and 4 times throughout the WEM. Exceptions to the standard mall design are the entertainment and the variously themed shopping areas. These portions of the WEM are the primary attraction for visitors.

Phase One in 1981 began with 25 hectares and a mall size of 106 000 square metres, incorporating 3 major department store anchors - Eatons, Sears and The Bay - as well as 220 retail stores and services. Phase Two in 1983 included the addition of the recreation and entertainment facilities, as well as an increase in size to 32 hectares and 460 stores and services. The new features included the Galaxyland Amusement Park, the world's largest indoor amusement park at the time of completion, and the NHL-size Ice Palace skating rink, which was the second home to the EDMONTON OILERS hockey club.

Phase Three in 1985 added one hectare and included specialty features for both retail and entertainment. The themed shopping areas of Europa Boulevard and Bourbon Street replicate streets from Europe and the French Quarter of New Orleans. Areas for entertainment included the World Waterpark, the world's largest indoor wave pool; Professor WEM's Adventure Golf Course, the world's largest indoor miniature golf course; and Deep Sea Adventure, the world's largest indoor lake housing live dolphins (until the last one was relocated in 2004), 3 full-size submarines and the only landlocked full-size replica of the historic ship, the Santa Maria. The Fantasyland Hotel was added in 1986, with 354 rooms, including 120 themed fantasy rooms. Phase Four in 1998 brought the WEM to its present size and added an IMAX theatre. The shopping centre has continued to evolve. Additions include a traditional Chinese marketplace, anchored by T&T Supermarket. Fountains decorate the entire shopping centre (all coins thrown into the fountains are donated to charity). The WEM has also commissioned a large number of artworks and sculptures.

The WEM was the first development in Canada that added large-scale entertainment to the retail experience. A direct response to a generation that has been raised in an entertainment culture, entertainment retail is the most recent development in the world of shopping. Ranging from electronics playgrounds to stores designed as movie sets, these new retail outlets sell fantasy as well as tangible goods.

In addition to its role within the larger context of retail development, the WEM has affected, in ways difficult to measure, the urban development of Edmonton, particularly the downtown core. It began as a fairly traditional mall development, attracting political support as a result of the construction and tax dollar benefits for the local economy, which had yet to recover from the energy crisis of the early 1980s. Over time, municipal fiscal attention shifted from downtown to the west end of Edmonton because the area surrounding the Mall was underdeveloped in roads and services. The resulting disproportionate development in the areas surrounding the WEM, as compared with other areas of Edmonton, stirred local debate and raised questions regarding land use and city and government support of private ventures.

Consumer traffic also shifted westward, as residents of Edmonton chose the increasingly extravagant amenities of the WEM over the more modest shopping and entertainment areas downtown. Kilometres of free parking at the WEM, as compared with expensive downtown parking rates, also drew visitors. The development of the discount "box retail" stores on the edges of the city has further marginalized the downtown as a destination for leisure and entertainment.

During the early 2000s, an Asian shopping boom led by emerging economic giants such as China, Malaysia, Turkey, and the Philippines contributed to a number of huge multipurpose mega-malls being constructed in these countries. By late 2007, 8 of the world's 10 largest malls were located outside of North America. The largest of them all is the New South China Mall in Dongguan, China, nearly double the size of the WEM at 660 000 square metres of gross leasable area (GLA, a term designating interior floor space leased for retail shops, services, restaurants and entertainment such as nightclubs, video arcades and cinemas), as compared with the WEM's 350 000 square metres of GLA.

Copying formulae developed in North America, the South China Mall was described in news reports as marrying Las Vegas and Disneyland and contains replicas of famous monuments such as the Arc de Triomphe as well as portions of the streets of Amsterdam, Hollywood and Paris. By comparison, the only remaining American shopping centre on the rapidly evolving top-10 list is the King of Prussia Mall in Philadelphia, Pennsylvania, whose GLA at 260 000 square metres slightly outpaces the more famous Mall of America in Bloomington, Minnesota, the largest shopping centre in the US by total area, with 230 000 square metres of GLA.

The shift of economic power and architectural bragging rights to emerging superpower cities is symptomatic of huge changes in the global economy. Even so, the emerging super-giant malls will find it difficult to achieve the iconic recognition and historical significance of the WEM. The global recession of 2008-10 slowed the expansion of these mega-malls elsewhere in the world. For example, despite its ambitious scope, or perhaps because of it, the New South China Mall has suffered since its opening in 2005 from a severe lack of tenants, calling into question its long-term viability.

Meanwhile, the WEM continues to attract high-end clients, including the Disney Store. Other developments include the introduction of new rides such as Cosmic Revolution as well as a challenging obstacle course (Rope Quest). The WEM offers multi-play passes for periods ranging from 3 months to 1 year. Birthday packages, both for children and adults, enable visitors to sample a wide range of activities. The WEM continues to reinvent itself for new generations.

The WEM may no longer be the world's largest shopping centre, but it continues to contribute significant economic benefits to the city of Edmonton and its region. The WEM also generated discussion about the pros and cons of building on such a scale and may well have helped generate counter-interest in developing traditional communities and shopping experiences - although visiting large, multipurpose shopping malls remains a key form of diversion for many Canadians.