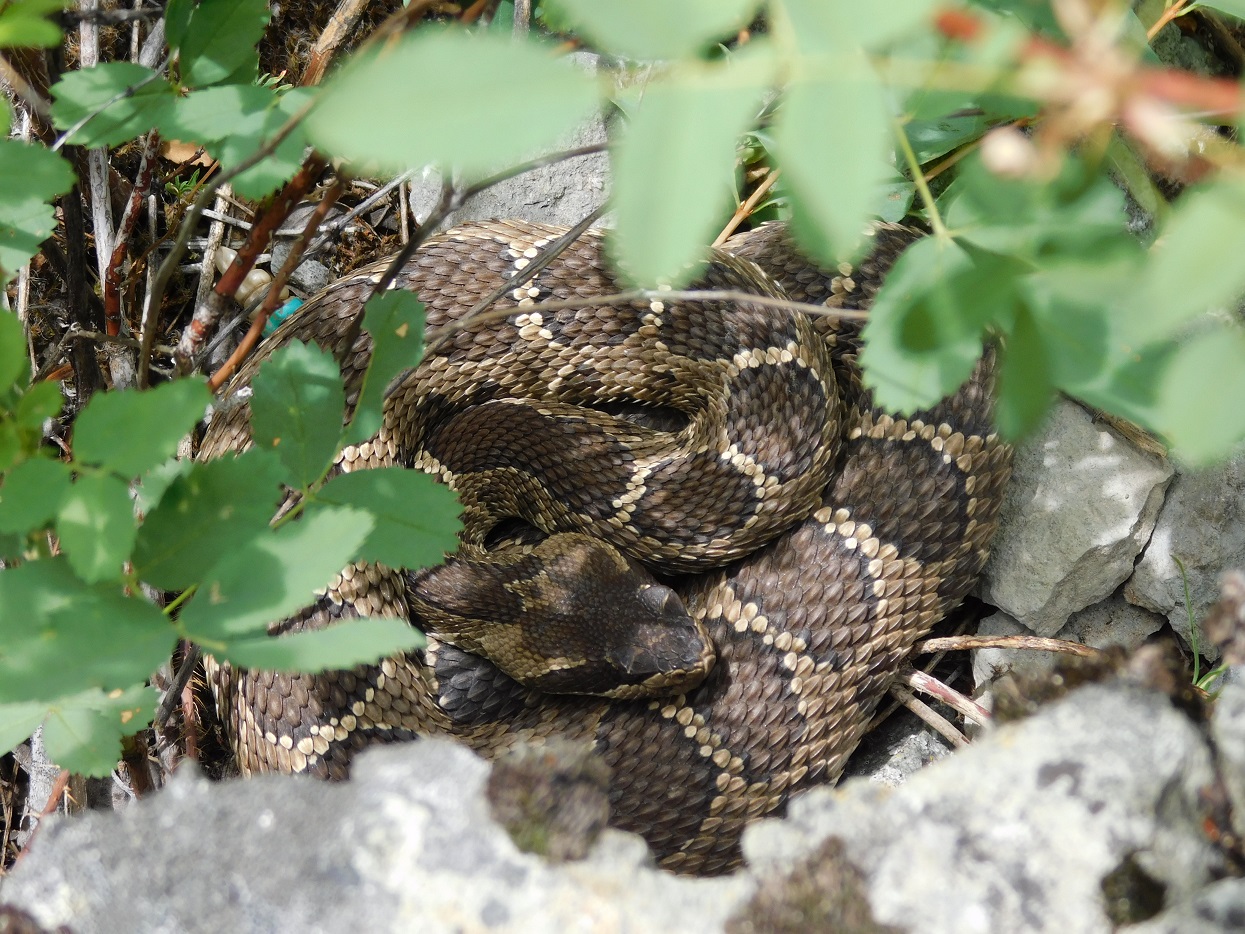 Adult Western rattlesnakes range from 60 to 150 cm long. Overall, they range in colour from brown to reddish-brown, tan, olive, grey or yellowish. They have a distinct pattern of dark-brown blotches on their backs. The blotches are surrounded by cream-coloured “halos.” Towards the tail, the circles turn to dark bands. The rattle on the end of their tails produces a buzzing sound and is used to warn predators to stay away. Rattlesnakes have triangular heads and pronounced necks, as well as vertical pupils. In addition, Western rattlesnakes are pit vipers. This means they have heat-sensing organs between their nostrils and their eyes that are used to locate prey.

Did you know?
In addition to the Western rattlesnake, two other species of rattlesnake live in Canada. The prairie rattlesnake (Crotalus viridis) lives in Saskatchewan and Alberta, and the massasauga rattlesnake (Sistrurus catenatus) lives in Ontario. The timber rattlesnake ( Crotalus horridus) is extirpated, meaning the species no longer exists in the wild in Canada, but lives elsewhere. 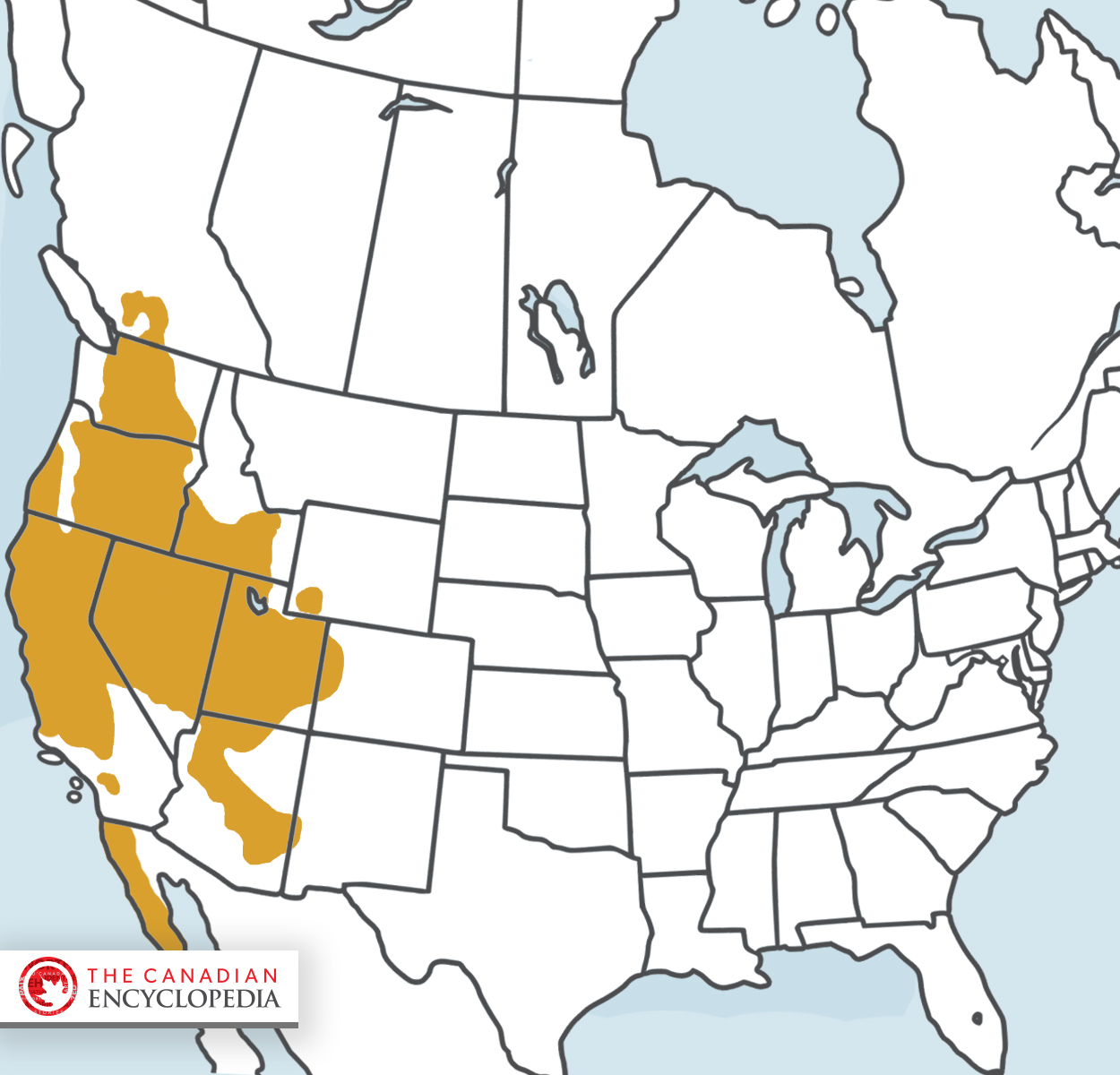 Within Canada, British Columbia is the only province where Western rattlesnakes are found. The province represents the northernmost part of their range. Western rattlesnakes are restricted to the dry valleys of the province’s southern interior, but their range extends as far south as California. They are normally found in forest or grassland habitats in rocky terrain. In the winter Western rattlesnakes hibernate underground in communal dens, which they may share with other snake species. Dens are usually located on south-facing, rocky slopes. These dens are critical for the snakes’ survival, and individuals will return to the same location year after year. In their active season Western rattlesnakes can complete migrations of up to 3 km to their summer hunting grounds. During this period the snakes feed and mate before returning to their dens in the fall.

Although Western rattlesnakes mate in the late summer, females store sperm over winter and fertilization occurs the following spring. Pregnant females stay relatively close to their dens while pregnant, and do not actively hunt during this time. They give birth from mid-September to early October to litters of 2–8 young. In general, females bear litters on average every 2–3 years. Newborns are born with only a “button” on the end of their tail, and lack the ability to rattle. Every time snakes shed their skin, another segment is added to the rattle. Male Western rattlesnakes grow more rapidly than females, and reach sexual maturity at about 3–4 years old, versus 5–7 years old for females.

Western rattlesnakes’ diet consists mostly of small mammals including mice, voles, shrews, woodrats, squirrels, marmots and occasionally birds. Rattlesnakes are passive predators, meaning they sit and wait for their prey to come to them. They use their heat-sensing pits to detect prey, then quickly strike to inject venom through their long, hollow fangs. Rattlesnake venom consists of a hemotoxin that degrades the prey’s tissue, starting the digestion process from the inside. Rattlesnakes swallow their prey whole, usually headfirst. Western rattlesnakes play a vital role in healthy ecosystems by controlling rodents and providing a food source for other predators like large birds, coyotes and badgers. 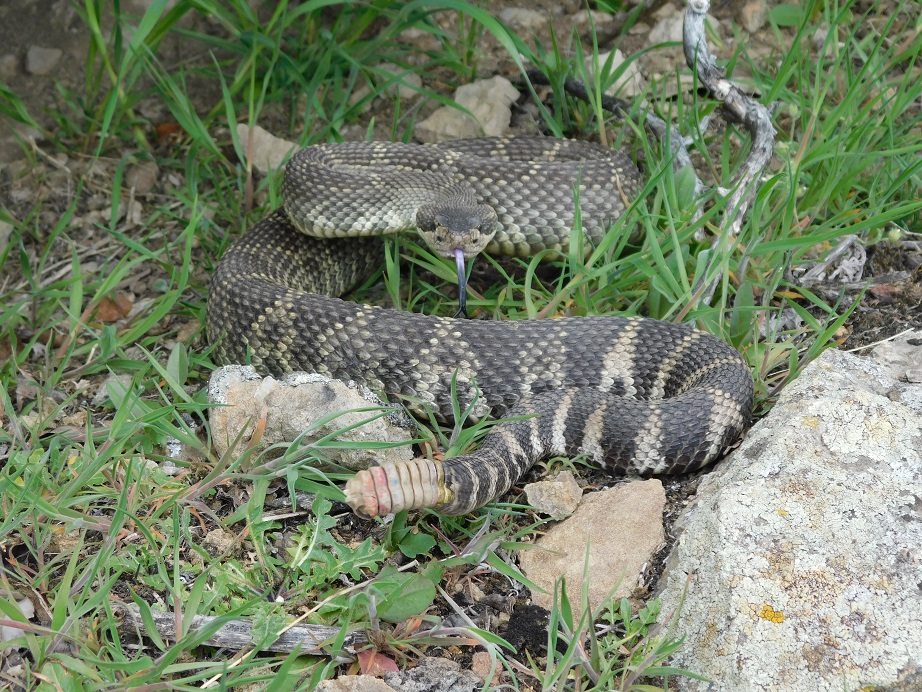 Like most wildlife, a major threat facing Western rattlesnakes is habitat loss and fragmentation. Dens, breeding sites and summer feeding grounds are essential to rattlesnake survival. However, urban and agricultural development have led to the loss of these habitats.

Road mortality is another major threat to rattlesnakes, as they often encounter roads during their summer migrations between dens and feeding grounds. Rattlesnakes are ectotherms, meaning they must use their environment to regulate their body temperature. Because of this, they are often found basking on roads in order to absorb heat. In addition, their size and shape means people often mistake them for a branch or a crack in the road. These factors increase their likelihood of being hit by a car and killed.

Western rattlesnakes are also intentionally killed by humans. Rattlesnakes have long been thought of as a dangerous pest, and as a result were often hunted. In reality, rattlesnakes play an important role in keeping their ecosystems healthy. In Canada, Western rattlesnakes are protected under the federal Species at Risk Act (SARA) and British Columbia’s Wildlife Act, making it illegal to kill, harm or capture snakes.

Surviving amidst these threats may be especially challenging for Western rattlesnakes at the northern extent of their range, where they experience low reproductive rates and a shorter active season. In Canada, Western rattlesnakes are listed as Threatened under SARA and are a “species of special concern” on British Columbia’s Blue List (see also Endangered Animals in Canada).

Did you know?
Snakes don’t have ears, therefore rattlesnakes can’t hear themselves rattle!

Western rattlesnakes generally are quiet, non-aggressive and good at hiding. They only bite humans in self-defence since, with the aid of their heat-sensing pits, they can tell that any human approaching them is too big to eat. Instead, they will rattle and seek shelter when encountered, and tend to become aggressive only if chased or cornered. Western rattlesnake bites are uncommon and rarely fatal.