The Last Voyage of the Karluk

On January 11, 1914, Vilhjalmur Stefansson's flagship, Karluk, was crushed and sunk by the tumultuous, rumbling ice of the East Siberian Sea. Not an auspicious start for an invasion, but that is exactly what it turned out to be.

Wrangel Island, only 7300 square kilometres, is squarely north of Siberia. The castaways of the Karluk disaster took refuge on wild and barren Wrangel, living there for six months awaiting rescue. Despite its Asiatic location, in 1921 Canadian explorer Stefansson tried to claim it for Canada. Stefansson, a man of vision, foresaw Wrangel's utility as a potential home for a weather station and a landing strip for future over-the-pole flights. That the island was 60 kms north of Russia and was claimed by that country didn't faze him. He instigated a plan to occupy it for two years initially, with possible extended occupation to strengthen his claim.

The basis for Stefansson's claim was prior occupation of the island for six months by the 17 survivors of the accidental sinking of the Karluk in 1914. Now, in 1921, he would strengthen that claim by landing four white men and one Inuit woman, Ada Blackjack, to continue occupying the island.

Stefansson's five "colonists" did not do well. The party was soon running low on food. Three of the men left the island on foot across the unstable sea ice trying to reach the coast of Siberia for help. They were never heard from again. The one remaining man, Lorne Knight, died of scurvy leaving Ada Blackjack to fend for herself and scare off polar bears for two months, her only companion a corpse. One day she looked out to sea and couldn't believe her eyes. In her own words, "I was so tickled."

Her rescue ship Donaldson carried a second wave of Stefansson's colonists, all Americans: one white man, Charles Wells, and 13 Inuit men, women and children, to maintain the Canadian occupation of the island.

After the ship left, for almost a year, a dark blanket of silence descended upon Wells and his Inuit "colonists." Then, in August 1924, the silence was broken. The Russians had got wind of what was happening on their island and did not like it one bit. They moved to end this impudence. The fuss was sparked off by the arrival at Wrangel Island of a Russian gunboat, the Red October. Captain B. D. Davydov arrested Charles Wells and his 14 Inuit -- yes, 14; a baby was born on the Island -- took them on board the Red October and headed for Vladivostok, his home port.

It was not evident how 14 Americans stuck in post revolutionary Russia in 1924 could get home to Alaska from Vladivostok. The Russians were not about to spend any money on living expenses for a group of penniless Inuit. The Russians tried to solve their problem by deporting the group to the Chinese border post of Sui Fen He in Manchuria on the Great Trans-Siberian Railway.

The Chinese would not accept them unless there was a guarantee that somebody would sponsor them. At this point the American Red Cross put up $1600 US to get the Inuit home. The money was made available to the American State Department representative in Harbin, Manchuria, the nearest Chinese city with American representation. The State Department took the destitute party under its wing and used the Red Cross donation to point them toward home. The Chinese finally relented and let the group ride the railway from the Russian border to Harbin. From Harbin they chugged on by train to the port city of Darien on the Korea Sea, and then by boat through the Yellow Sea and the Sea of Japan to Kobe. From there a Japanese ship took them to Seattle where they boarded the Alaskan Territorial Government's ship the SS Boxer to Nome, arriving very tired, but happy to be home at last.

So ended Canada's invasion of Russia. 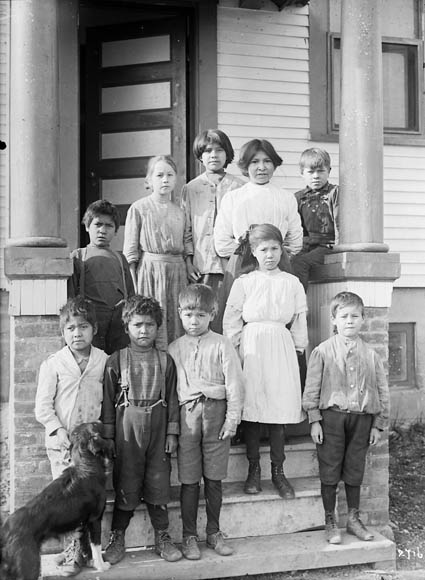 The Name Debate: An Introduction