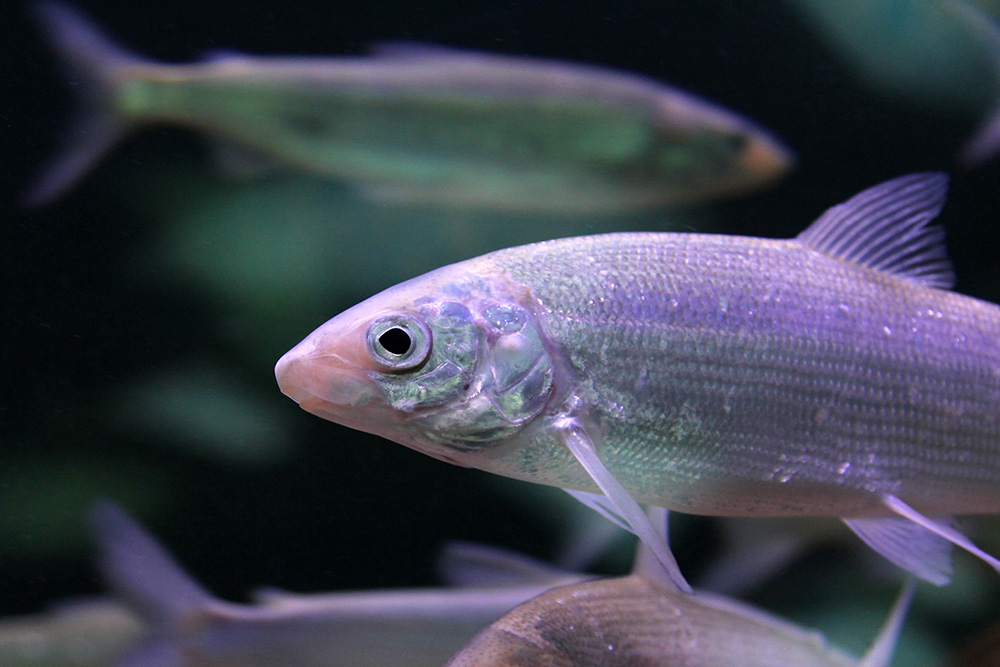 Genus Coregonus, with 16 species, includes the whitefishes proper and the ciscos (formerly classified in genus Leucichthys). Whitefishes tend to be bottom feeders, with the snout overhanging the lower jaw and a few gill rakers for sifting large food particles. Ciscos feed in midwater, have a lower jaw at least as long as the upper, and many gill rakers for sifting small food items.

There is considerable confusion concerning the relationships of species within genus Coregonus, but it includes at least 3 species of whitefish and 11 of cisco (5 found only in the Great Lakes). In southern Canada, most species, marketed as "chubs," are confined to lakes. In the north, river and even anadromous (seagoing) populations are common. The latter may undertake long journeys, eg, migrating over 1000 km in the Mackenzie R.

The third genus, Stenodus, includes a single species, inconnu (S. leucichthys), the largest of the whitefishes (up to 150 cm long and over 28 kg). The inconnu preys on other fishes and has a pike-shaped body and a large mouth with a projecting lower jaw. It occurs in large lakes and streams but, in Canada, is confined to the Mackenzie drainage and areas west.

Lake whitefish (C. clupeaformis) is Canada's most important commercial freshwater species, although catches have declined over the last 20 years, particularly in the Great Lakes, because of environmental degradation and overfishing. Several species of ciscos were formerly fished commercially in the Great Lakes, but are now much depleted and no longer commercially exploited. Several species of whitefish remain important as food for Aboriginal People. Whitefishes are not important for sport, although angling for mountain whitefish (P. williamsoni) is gaining popularity in BC and Alberta.