Archaeological work near Whitehorse has uncovered artifacts at least 2,500 years old — demonstrating Aboriginal people’s use of the area for many centuries. These artifacts indicate that Yukon First Nation peoples camped there regularly to hunt and fish. They were most likely the ancestors of the Southern Tutchone, Inland Tlingit and Tagish people who currently reside in and around Whitehorse. 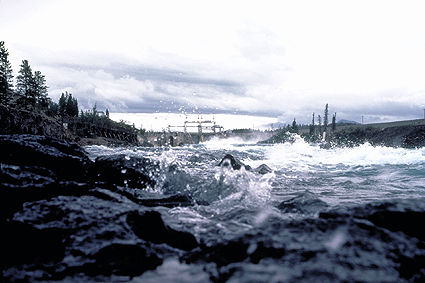 The Whitehorse Rapids are so-named for their resemblance to a horse's mane. They are at the point on the Yukon River where the paddlewheelers could go no further (courtesy Canadian Circumpolar Inst, University of Alberta).

Located at the head of navigation on the Yukon River, in 1898 Whitehorse became a temporary stopping point — past two major obstacles on the river, Miles Canyon and the Whitehorse Rapids — for prospectors during the Klondike Gold Rush. In 1900 it became a permanent settlement, based on transportation and services, with the completion of the White Pass and Yukon Route Railroad from Skagway, Alaska. The community grew around the point where the railway and river met, on the western bank of the river.

Since 1900 the White Pass and Yukon Route Corporation has helped the city and territory develop by providing services and employment. Apart from its railway, the corporation established the British Yukon Navigation Company, which built riverboats and operated them to Dawson until 1954.

A short-lived copper boom in the Whitehorse copper belt ended in 1920. Throughout the 1920s and 1930s, the corporation promoted the tourist industry and Whitehorse became an outfitting and takeoff base. In 1935 it established the British Yukon Aviation company to transport mail, freight and passengers from its base in Whitehorse. From an estimated 2,000 after the gold rush, Whitehorse's population dropped by 1941 to about 750. 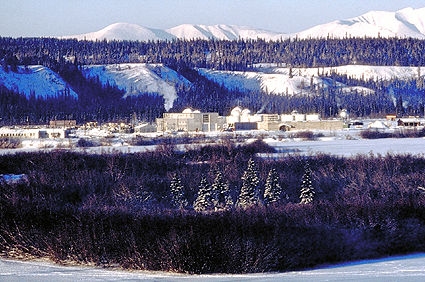 Capital and largest city of the Yukon (photo by John de Visser).

During the Second World War Whitehorse played a significant role as a key link in the north-south transportation system supporting the war effort. About 30,000 American and Canadian servicemen and civilian workers expanded the facilities of the Northwest Staging Route (a series of airfields across the Northwest), which acted as the air link, built the 2,300 km Alaska Highway, and constructed the Canol Pipeline from Norman Wells, Northwest Territories, and an oil refinery at Whitehorse.

After the war, the Alaska Highway was opened to civilian traffic and replaced the Yukon River as the dominant transportation route. Whitehorse became the headquarters of the Northwest Highway System. In 1953, the territorial capital was moved from Dawson to Whitehorse, adding the government sector to the city's economic base.

Whitehorse's original townsite, surveyed on a conventional grid pattern, evolved into three functional zones: commercial and retail located on Main Street and 1st Avenue, residential north and south of Main Street, and the railway and docking facilities between 1st Avenue and the Yukon River. The industrial area, including mining company offices, lies north of the city, while government offices dominate blocks on the edge of the commercial area, located in the city centre. 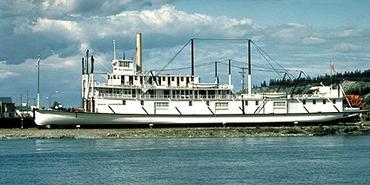 Whitehorse's colourful past is preserved in the restored riverboat Klondike and the Anglican log church built in 1900. The Yukon Beringia Interpretive Centre, opened in 1997, displays an even more ancient past, of some 24,000 years ago, and the culture and traditions of Yukon First Nations. A new $50-million facility for Yukon College was completed in 1988. The Yukon Arts Centre, opened in 1992, hosts art and cultural events for the entire Yukon.

About 70 per cent of the Yukon’s population resides in Whitehorse. In the 2016 census, the most frequently reported ethnic origin was English, at 30.6 per cent of the city’s population, followed by Canadian (27.7 per cent) and Scottish (25.5 per cent). Visible minorities account for 10.8 per cent of city residents, with Filipino, South Asian and Chinese people comprising the largest communities within this group. A further 18 per cent of the city’s population is Indigenous. Many of the Indigenous residents are members of either the Ta’an Kwäch’än (see Tutchone) or the Kwanlin Dun First Nations, whose traditional territories overlap in the vicinity of Whitehorse.

In the 1950s the federal government initiated a road construction and financial-aid program to stimulate the territory's mining economy. As a result silver production expanded at Mayo, and copper and lead-zinc production started at Faro. By the end of the 1950s an integrated ship-train-truck containerized transportation system was moving ore through Whitehorse to external markets. The shutdown of mines in the Yukon, notably Faro in 1982, had an adverse effect on the city, and the White Pass and Yukon Route Railroad. operations were ended in that year. However, mining in the Yukon recovered considerably in the mid-1990s.

Improved accessibility also directly affected Whitehorse's economy through the tourism industry. Every summer many thousands of tourists pass through Whitehorse on their way to and from Alaska, providing local businesses with a steady seasonal income. The tourism industry also fosters winter tourism by promoting events such as the Sourdough Rendezvous Festival and Yukon Quest 1,000 Mile International Dog Sled Race.

The completion of the Alaska Highway and subsequent expansion of the road system resulted in the demise of the steamboat and prevented the White Pass and Yukon Route Railroad from reopening.Whitehorse now serves as the central hub of transportation services throughout the Yukon. Virtually all trucks bound for Alaska, rural Yukon, and Inuvik, Northwest Territories pass through Whitehorse en route to their destinations.

In 1958, Canadian National Telecommunications (CNT) purchased the Whitehorse Telephone Exchange, and in 1979, Whitehorse became the home of a northern-based major phone subsidiary named Northwestel. The company was subsequently sold to Bell Canada Enterprises, the parent company of Bell Canada, in 1988. Northwestel then became the dominant player in the communications business in northern Canada.

Whitehorse is served by two major local papers: The Whitehorse Star and the Yukon News.

Whitehorse is the administrative centre of the Yukon. The city hosts the territory's largest hospital, the Andrew A. Philipsen Law Centre, the main campus of Yukon College, and the offices of four levels of government. The numerous federal employees in the Yukon work out of the Elijah Smith Building, while most Yukon government employees are housed in the Yukon Government Administration Building adjacent to Rotary Peace Park. The Council of Yukon First Nations, representing the majority of Yukon First Nations and their governments, is located in downtown Whitehorse, not far from the Kwanlin Dun Cultural Centre and the public library. Whitehorse city council consists of a mayor and six councillors elected for 3-year terms.

Whitehorse has an active sporting and recreational culture that fosters and sponsors events on an international, national, and local scale. At the international level, Whitehorse and Fairbanks, Alaska, co-sponsor the 1,600 km Yukon Quest 1,000 Mile International Dog Sled Race, billed as the longest, non-motorized race in the world. Whitehorse and Fairbanks alternate as the starting and finishing lines for this gruelling event that has been held every year since 1984. The city also serves as the starting point for the world's longest annual canoe and kayak race: the Yukon River Quest. The race starts on the Whitehorse water front, and ends 715 km down river at Dawson City. This event, which has been held every year since 1999, regularly attracts participants from across North America, and in 2015, 58 teams from 12 different countries participated.

On the national level, Whitehorse was the first territorial capital to host the Canada Winter Games, in 2007. It has also hosted the Arctic Winter Games six times since the games commenced in 1970.

At the local level, the city has sponsored the Sourdough Rendezvous Festival every winter since 1962. This week-long festival features a variety of sports and activities, including flour-packing contests — an event in which contestants carry as much flour on their backs as they can, for as far as they can — dog sled races and fiddling shows.

Hours of Sunshine per year 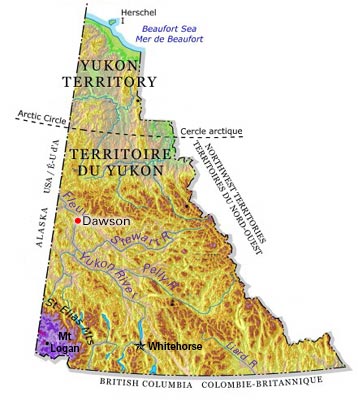