Nuts are good sources of protein, fat, carbohydrates, vitamins (such as the B-vitamins) and minerals (such as Iron). They can be eaten raw, but for many, cooking can enhance their taste, digestibility and nutrient availability. Many produce significant quantities of oil. Acorns of oaks, in particular, often need to be processed by leaching in water and/or boiling to remove some of the bitter-tasting and potentially harmful tannins. 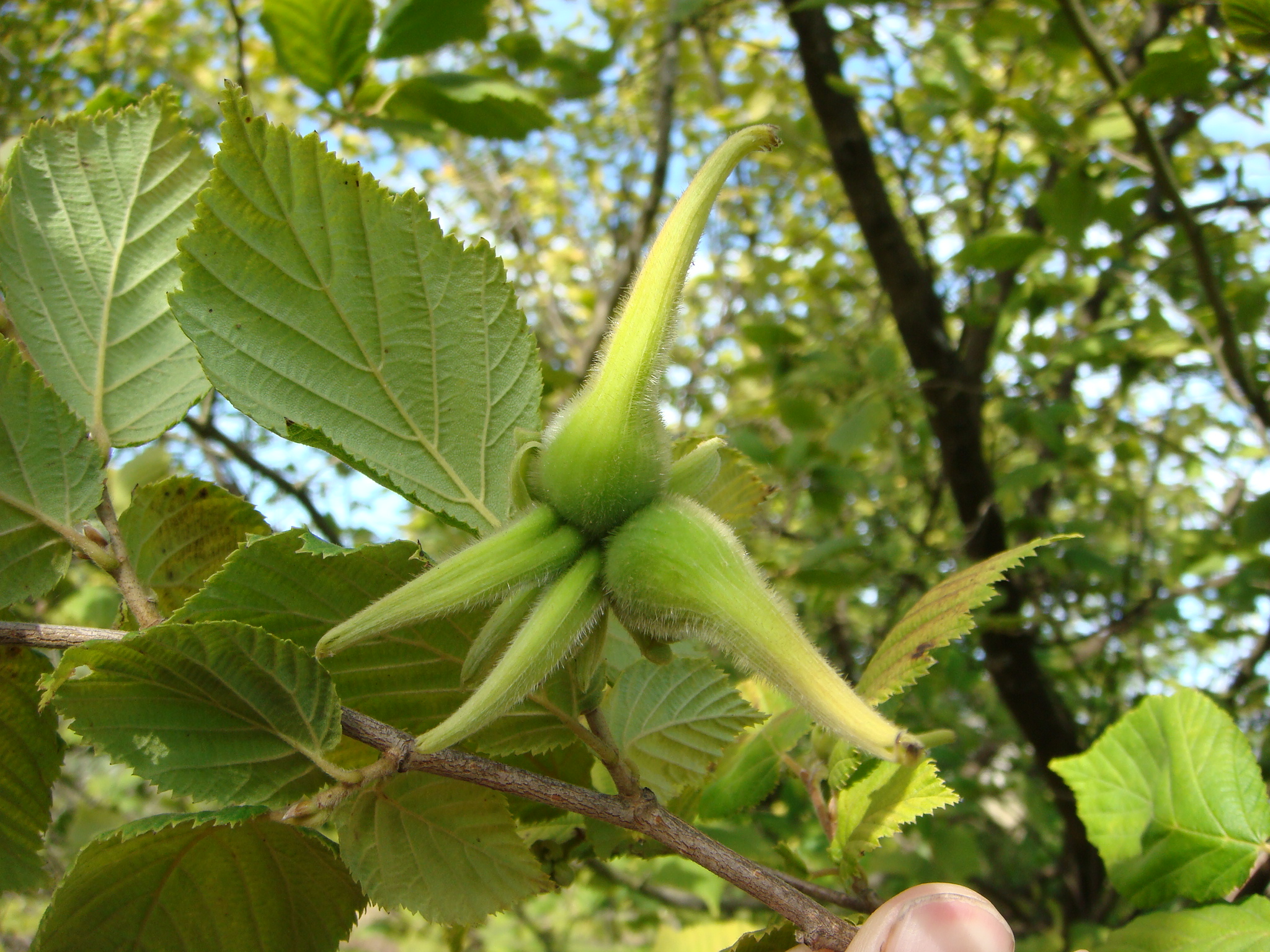 The beaked hazelnut can be found in Canada from British Columbia to Newfoundland. (photo by Thomas Molnar, courtesy eXtension Farm Energy/Flickr CC) 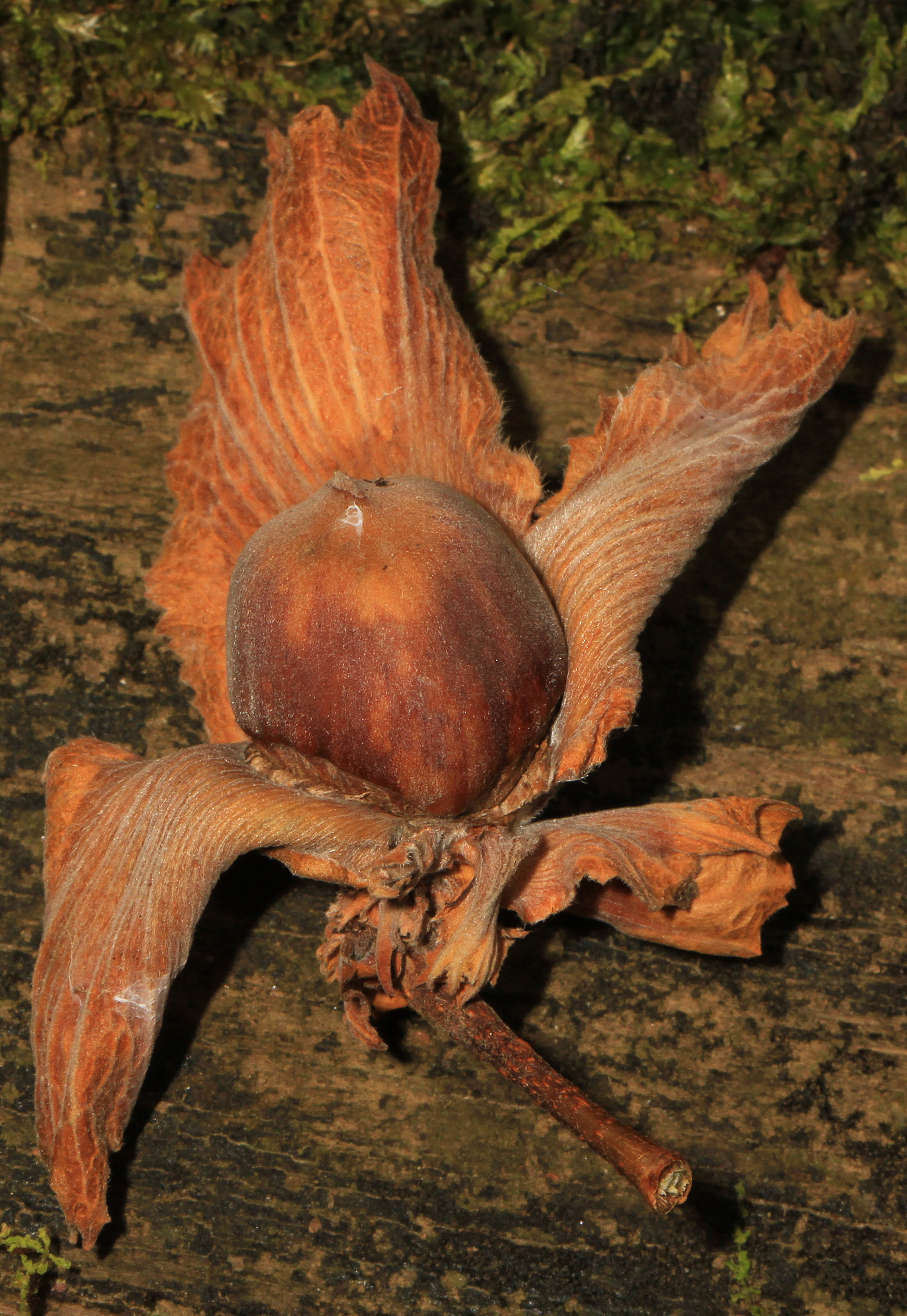 Hazelnuts are smooth, round and have a hard shell. They are usually harvested in late summer. (courtesy Judy Gallagher/Flickr CC)
PreviousNext

Hazelnuts are bushy, deciduous shrubs growing up to 3 m high. The nuts, which grow on their own, in pairs or in small clusters, are smooth, round, and hard-shelled. Each nut is enclosed in a green, leafy sheath. Two species of hazelnut are native to Canada: the beaked hazelnut (Corylus cornuta) and the American hazelnut (C. americana). The beaked hazelnut is found from British Columbia to Newfoundland, whereas the American hazelnut is found from southern Manitoba to southwest Quebec.

The nuts of both species were used by the Haudenosaunee and Anishinaabe. Beaked hazelnut was used by the Cree, Dakota (Sioux), Algonquin, Mi’kmaq, and Wolastoqiyik (Maliseet) peoples, as well as by, many BC First Nations (virtually all the coastal and interior Salishan peoples, Dakelh, Tsilhqot’in, Ktunaxa, Gitxsan, Nisga’a, and upriver Tsimshian).

Hazelnuts were usually harvested in late summer, sometimes from the caches of squirrels. The name for “squirrel” in some Indigenous languages relates to these nuts. For example, the Nisga’a name for hazelnuts, ts’ak’a ts’inhlik, translates as “dish of squirrel.” To remove the husks, the nuts were buried in damp ground. The kernels were eaten raw, roasted, boiled in soups or mixed with berries and fat and made into nutrient rich cakes. Large quantities of hazelnuts were stored for winter, or put aside to be traded for other foods. People sometimes burned or coppiced the bushes to renew their growth, and the bushes were also transplanted to new territories. Canada’s wild species of hazelnut are still eaten today, but have largely given way to the commercial filbert. 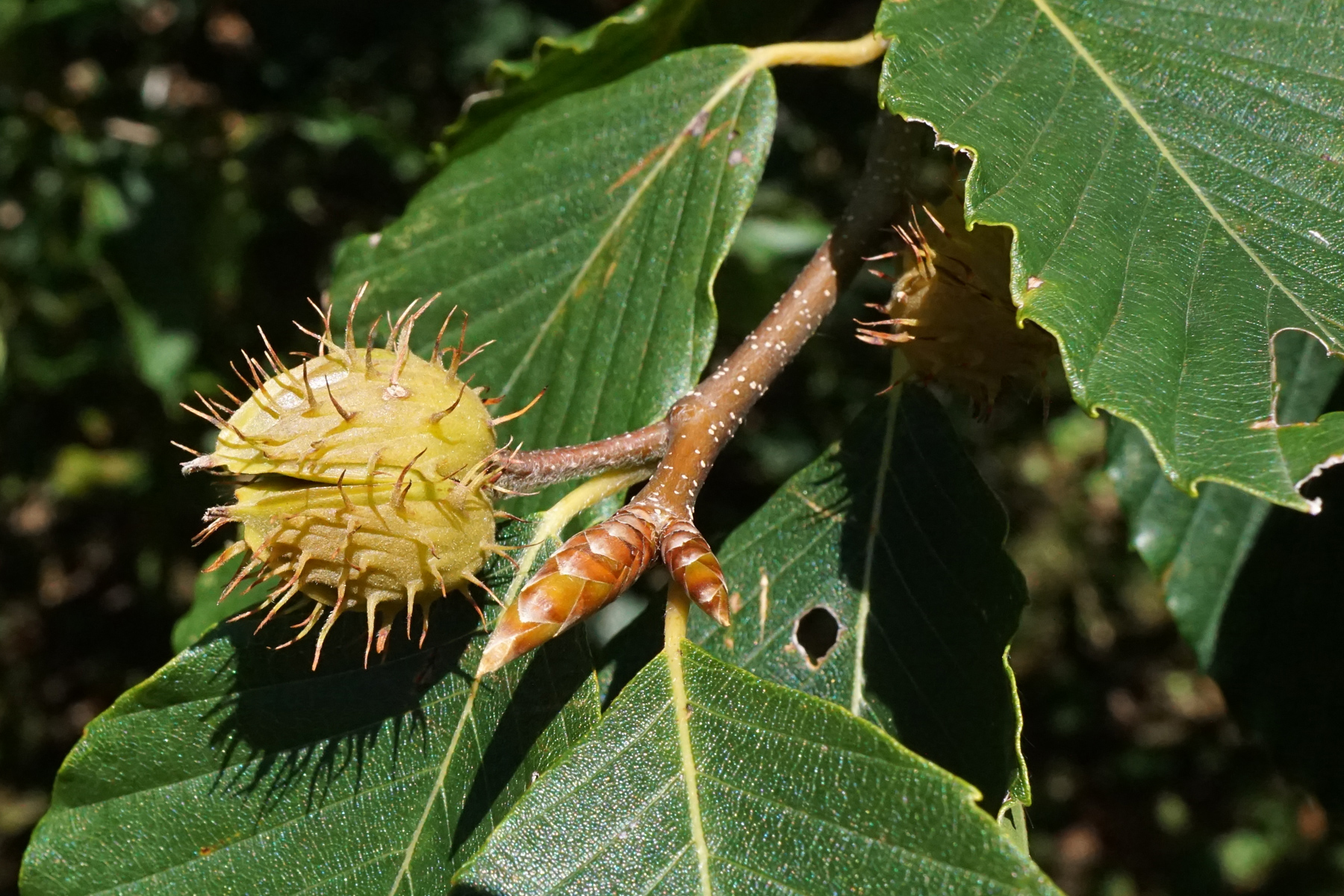 American beechnuts grow inside a prickly husk, and in Canada can be found from southern Ontario east to the Maritimes.

The American beechnut is a straight-trunked deciduous tree that grows up to 25 m tall. It has large, simple, elliptical leaves. It grows in the rich woods of southern Ontario east to the Maritimes. The nuts are triangular, pointed, brown and thin-shelled, each about 2 cm long. They grow in pairs inside a prickly husk. They can be gathered from the ground in the fall, or from caches of deer mice and other rodents. Sweet and flavourful, the nuts were eaten, raw or cooked, by all of the Indigenous Peoples living within the range of the tree, including: Anishinaabe, Mi’kmaq, Wolastoqiyik, Algonquin, Haudenosaunee and Potawatomi. Beechnuts can also be mixed in breads and puddings, and oil rendered from them can be used in cooking. Some people still harvest these nuts today. 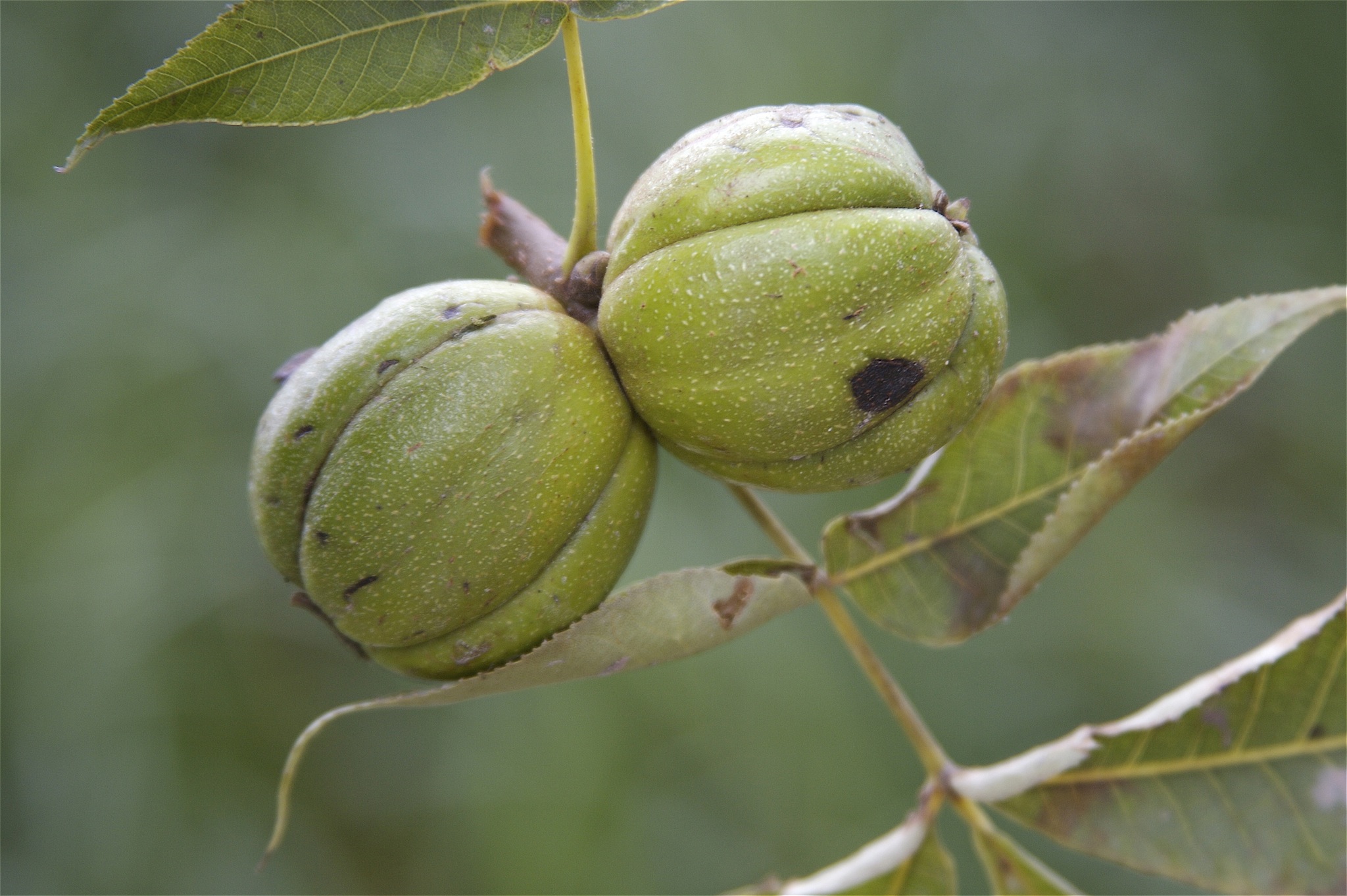 The woody husk of the shagbark hickory splits open at maturity. In Canada, it grows in southern Ontario and along the St Lawrence in Quebec.

Shagbark hickory grows in southern Ontario and along the St. Lawrence in Quebec, and is the main source of hickory nuts in Canada. Shagbark hickory is an upright deciduous tree with shaggy, peeling bark. Its leaves are compound, with five oval-shaped, pointed leaflets extending from a central stalk. The nuts are surrounded by a thick, woody husk that splits open at maturity. The nutshells are hard, but the kernels inside are sweet, and were a favourite staple of the Indigenous Peoples of the Great Lakes region: particularly Anishinaabe, Haudenosaunee and Potawatomi. The nuts can be eaten raw or roasted, and were sometimes crushed and mixed with cornmeal and beans or berries and made into a kind of bread. People also rendered the oil from hickories, using it as a condiment for many dishes. 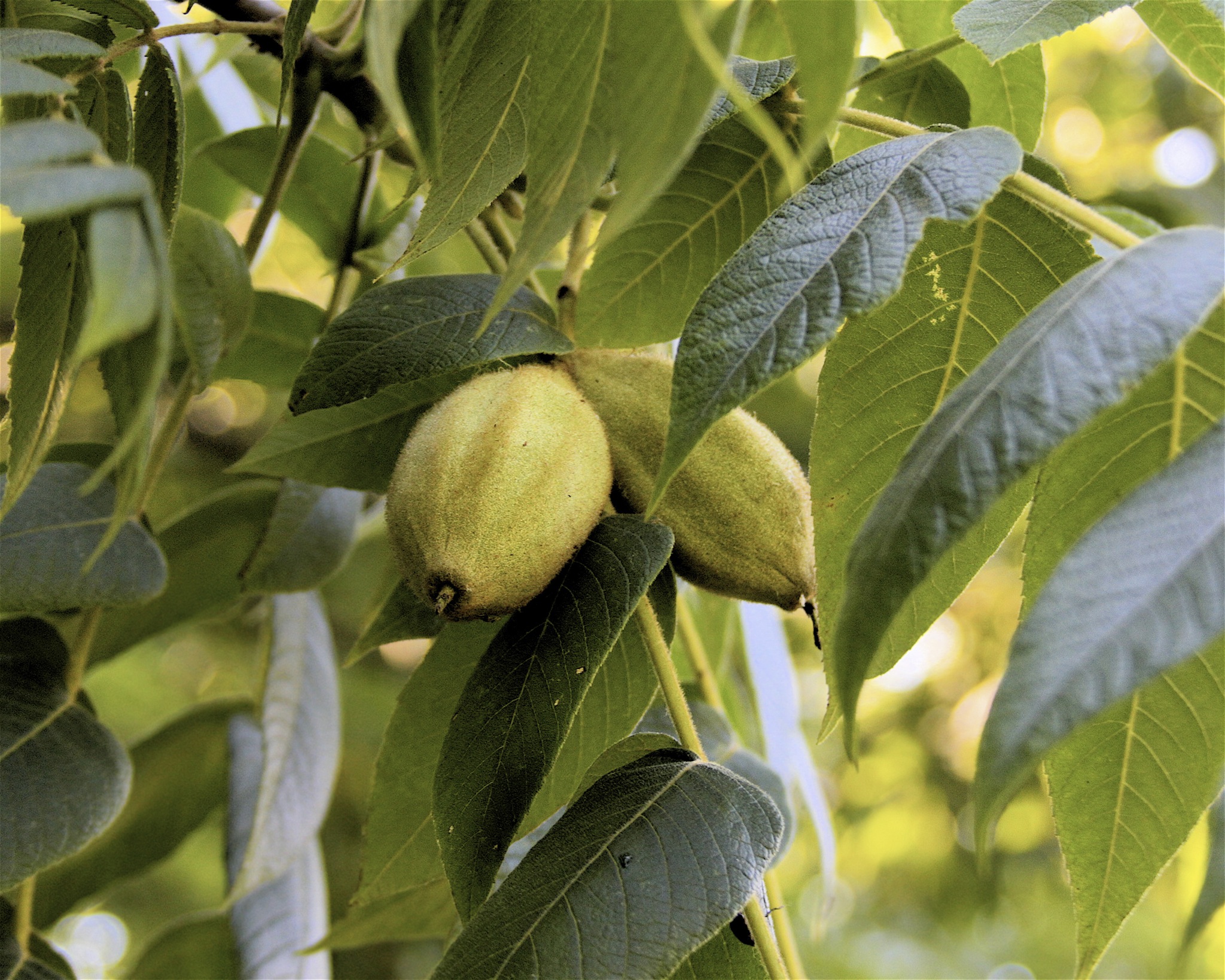 Butternuts have hairy, sticky hulls, and in Canada can be found in New Brunswick, southern Ontario and Quebec.

Butternut and black walnut, both belonging to the genus Juglans, are medium-sized deciduous trees. Each has large leaves made up of multiple leaflets extending from a single stalk. Butternuts are about twice as long as they are wide, with densely hairy, sticky hulls and grooved, jagged shells. Black walnut hulls are not sticky; the nuts are round with smooth ridges. Butternut trees grow in New Brunswick and southern Ontario and Quebec; black walnut trees grow in the moist lowlands of southwestern Ontario. Butternut trees are considered endangered; they are susceptible to a fungus called Butternut Canker and their numbers are diminishing because of this disease.

Both of these nuts have an excellent flavour; butternuts are said to be superior in taste to commercial walnuts (Juglans regia). Butternuts, gathered in September and October, were eaten by all Indigenous groups within the tree’s range, including Haudenosaunee, Anishinaabe, Potawatomi, Algonquin, Mi’kmaq and Wolastoqiyik, and were prepared and used similarly to shagbark hickory nuts. Black walnuts are more restricted in range but were eaten by the Haudenosaunee and Huron-Wendat. 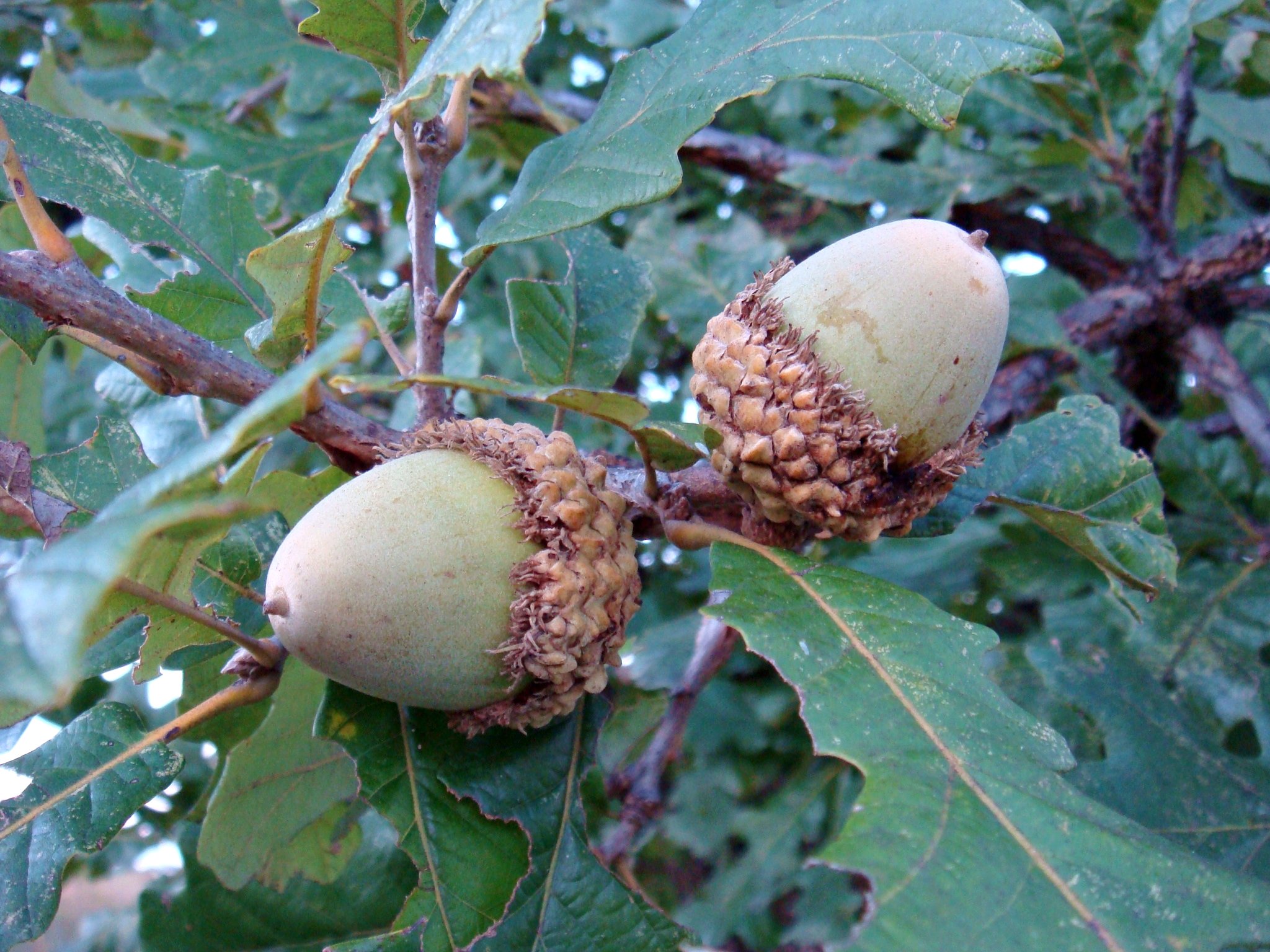 The bur oak is one of 10 oak species native to Canada. Each produces nuts called acorns.

There are at least 10 species of oak native to Canada, including nine full-sized trees and one shrub, dwarf chestnut oak (Quercus prinoides). Garry oak (Quercus garryana) is restricted in Canada to the driest forests of southwestern British Columbia. Bur oak (Quercus macrocarpa) grows from southern Manitoba and Saskatchewan to New Brunswick. All the other oaks are restricted in Canada to the Southeast, mostly southern Ontario. Acorns are the oaks’ thin-shelled, egg-shaped fruits, each topped with a woody, scaly cap.

All acorns are potentially edible when properly processed, and for North American Indigenous Peoples, they were among the most widely used of all nuts. Acorns from oaks with round-lobed or regularly toothed leaves (the white oak and chestnut oak groups) are more palatable than those with sharply-lobed leaves (the red oak group), which are usually high in bitter tasting tannins and used mainly in times of food shortage. Few people eat acorns today, although in the past they were a staple for many: Anishinaabe, Mi’kmaq, Wolastoqiyik, Haudenosaunee, Huron-Wendat and Potawatomi, among others. On the west coast, garry oak acorns were eaten by the Straits Salish and related peoples. Acorns were generally gathered from the ground in the fall, often by women and children. The tannins were extracted by boiling the acorns in several changes of water, sometimes with lye from wood ash. The acorns could also be stored in baskets buried in the damp mud, to allow the tannins to be leached away. They were used in soups or pounded and made into meal to be used in a variety of dishes. 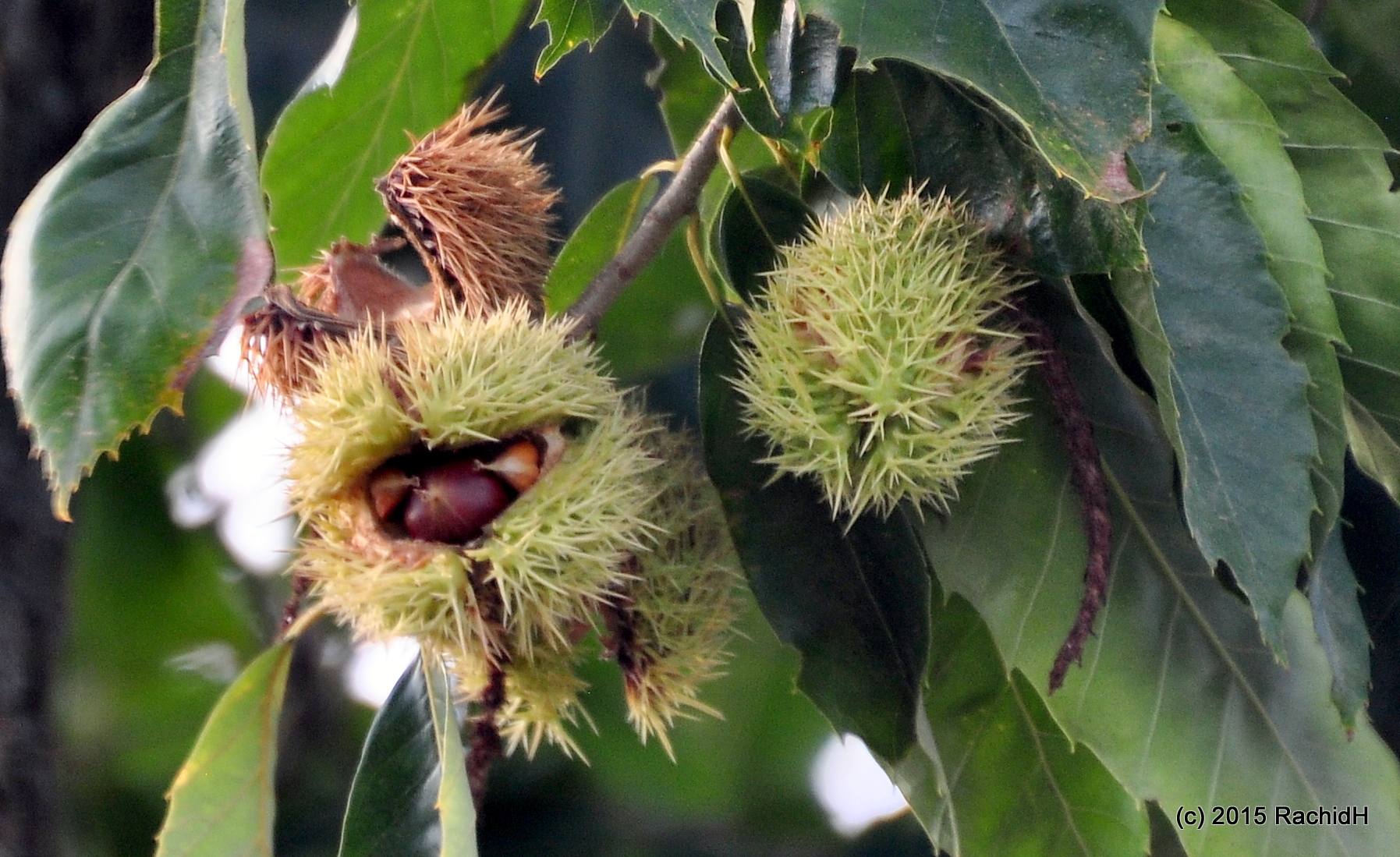 Once common in southern Ontario, American chestnut is now an endangered species due to an introduced bark fungus.

American chestnut is a medium-sized, upright deciduous tree with large, oval-shaped, pointed and finely toothed leaves. Its nuts are enclosed in a spiny husk. This tree was formerly common in the hardwood forests of southern Ontario and elsewhere in eastern North America, but was destroyed by an introduced bark fungus and has all but disappeared.

Chestnuts were once an important food of the Haudenosaunee and other Indigenous Peoples of eastern North America. The nuts were eaten raw or cooked, or dried and pounded into flour for bread, soups and puddings. They were also roasted like coffee beans and made into a beverage.

DID YOU KNOW?
The edible American chestnut and its relatives should not be confused with the horse chestnut (Aesculus hippocastanum), which is a common street and yard tree in many parts of Canada. Native to southeastern Europe, horse chestnut produces nut-like seeds encased in prickly husks. Although they have medicinal applications, horse chestnuts should not be eaten as they are somewhat toxic.

Though not a true nut, the large, nut-like seeds of whitebark pine, a subalpine forest tree found in the mountains of central and southern British Columbia and western Alberta, were eaten by the Interior peoples of BC: Stl’atl’imx (Lillooet), Nlaka'pamux (Thompson), Secwepemc (Shuswap), Sylix (Okanagan), Tsilhqot’in and Ktunaxa. The cones were harvested in the late summer and fall from local mountain ridges, roasted in the fire or in the oven, and the seeds extracted, cracked and eaten like peanuts. They were stored for winter use, and sometimes crushed and mixed with dried Saskatoon berries (Amelanchier alnifolia) and other foods. While they are remembered fondly by many elders, few people eat them today. Formerly they were traded; for example, the Lower Nlaka'pamux often obtained them from the Upper Nlaka'pamux in exchange for hazelnuts. Seeds of other conifers such as ponderosa pine (Pinus ponderosa) and Douglas fir (Pseudotsuga menziesii) were also eaten on occasion.

Nuts are important food sources for many types of wildlife, which also help to distribute and propagate the plants themselves. Mice, squirrels, chipmunks, bears, foxes, raccoons, jays, woodpeckers, grouse and quail are all known to consume various kinds of nuts. Many oaks and other nut trees have resulted from nuts cached by jays or squirrels and then overlooked when it came time to retrieve them. The leaves, twigs and other parts of nut trees and shrubs are browsed by deer and moose, and beaver eat the bark of some species, such as hazelnuts.