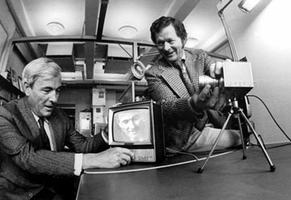 Willard Sterling Boyle, physicist, Nobel laureate (born at Amherst, NS 19 Aug 1924; died at Truro, NS 7 May 2011). Willard S. Boyle is best known for his contribution to the invention of the charge-coupled device (CCD), which is the basis for multiple types of imaging and an essential part of digital cameras, bar code readers, satellite surveillance technology and the Hubble space telescope.

Boyle grew up in northern Quebec, his family having moved there from Nova Scotia when he was a small child. His father was a physician in the logging community of Chaudière, and Boyle was home schooled by his mother. He began his formal education at Lower Canada College when he was 14 and went on to study at McGill University. In 1943, Boyle enlisted in the Royal Canadian Navy and served in the Fleet Air Arm as a Spitfire pilot. After the Second World War he resumed his education, earning bachelor (1947) and master (1948) of science degrees and a doctorate (1950) in physics at McGill. He worked at the university's radiation laboratory for a year before taking a position teaching physics at the Royal Military College of Canada in Kingston. In 1953, he joined the research staff at Bell Labs in Murray Hill, NJ; during his career with Bell, he worked on approximately 18 patents.

Boyle was part of several discoveries at Bell Labs, including creating the first continuously operating ruby LASER with colleague Don Nelson in 1962. Also in 1962, Boyle became the Director of Space Science and Exploratory Studies at Bellcomm, a division of Bell Labs; in that position, he provided support for the Apollo space program and helped select lunar landing sites. He returned to Bell Labs in 1964 and in 1969, with George Smith, created the charged-coupled device. Boyle retired from Bell Labs in 1979 as the Executive Director of the Communication Science division. During his retirement, he provided leadership to the Research Council of the Canadian Institute of Advanced Research, and to the Nova Scotia Council for Applied Science and Technology.

Invention of the Charge-Coupled Device (CCD)

Willard Boyle and George Smith credited vigorous brainstorming sessions for inspiring their invention of the now ubiquitous charge-coupled device. Smaller than a dime, the device takes advantage of the photoelectric effect, the explanation of which earned Albert Einstein the Nobel prize in 1921. The photoelectric effect observes that light shined onto a piece of metal causes a small current to flow through the metal. The CCD captures light, stores it, and then displays it by converting it into electrical charges. It allowed images to be captured electronically, instead of on film.

Boyle and Smith were jointly awarded half the 2009 NOBEL PRIZE in Physics "for the invention of the imaging semiconductor circuit - the CCD sensor." The other half of the prize was given to Charles Kuen Kao for his research on fibre-optic cables.

After Boyle and Smith were awarded the Nobel prize, other Bell scientists claimed credit for the CCD discovery, saying that the original purpose of the device did not concern imaging but memory. However, Boyle and Smith filed their patent four years ahead of the other scientists and had documentation disproving the detracting claims.

In addition to the Nobel, Boyle has won many awards for his work including the Franklin Institute's Ballantyne Medal (1973); the Morris Liebmann Award of the Institute of Electrical and Electronics Engineers (1974); the C&C prize of the NEC Foundation, Tokyo (co-winner, 1999); and the Charles Stark Draper Prize, National Academy of Engineering, 2006. He was inducted into the Canadian Science and Engineering Hall of Fame in 2005 and was made a Companion of the Order of Canada in 2010.