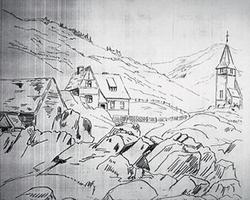 Portugal Cove, Newfoundland the Parsonage and Church by William Grey. This is a sketch of his house and his parish church and both were designed by him (courtesy Royal Institute of British Architects).

William Grey, clergyman, architect (b at England 27 Oct 1819; d at Exeter, Eng 1 Sept 1872). If Edward Feild, Bishop of Newfoundland, is to be credited with imposing the architecture of the Gothic revival on Newfoundland, then William Grey must be seen as his principal assistant and architect. Grey, educated at Magdalen College, Oxford, first came to Newfoundland as secretary/chaplain to Feild in 1848. He had wanted to become a missionary on the Labrador but Feild persuaded him that he was needed to run Queen's, the Anglican theological college in St John's.

There, along with their theological training, the divinity students were given a thorough grounding in the principles of medieval church architecture so that they could design their own churches in the fashion deemed proper by the ecclesiologists, ie, without galleries and with Gothic details and exposed framework. It was his view that the most practical approach to church architecture in Newfoundland was to make use of local materials and the local clergy - as long as they were trained in the right manner. He designed or remodelled 11 churches in Newfoundland and Labrador, of which only one still stands, that at Battle Harbour (1857).

The illness of his wife obliged him to return to England in 1853, but he spent the summer of 1857 in Newfoundland. After this last visit he published a collection of his sketches, many of which show his church designs. Until 1865 he served the parish of Milford, Whitley, and then retired to live in Exeter, where he died. His own design work and the architectural training he gave his students ensured the educated use of the Gothic revival for Anglican churches throughout Newfoundland.