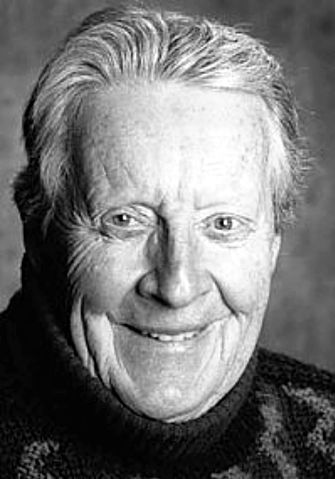 William (Bill) Needles, CM, actor, teacher (born 2 January 1919 in Yonkers, New York; died 12 January 2016 in Alliston, Ontario) William Needles is best known as a founding member of the Stratford Festival, where he appeared in over 100 roles.

George William Needles was the eldest child of Marian and Ira Needles, who was co-founder of the University of Waterloo. At the age of seven, his family moved to Kitchener, Ontario, where William and his two younger siblings spent the bulk of their childhood and adolescence. William’s father, Ira Needles, was an imposing, larger-than-life figure: he grew up poor on an Iowa farm and made his way up in the world of business, eventually becoming the president of B.F. Goodrich Canada. Ira was wary of his eldest son’s impractical ambitions to become a stage actor but eventually let him follow his passion. After graduating high school, William Needles attended the Goodman School of Drama in Chicago, an institution his father permitted him to attend only because it had such a prestigious reputation.

After he finished the two-year acting program in Chicago, Needles briefly worked as an actor and stage manager in Winnipeg before moving to Toronto. In 1940, he was cast as the male lead in the CBC radio drama John and Judy, where he would appear for the next fourteen years. Needles’ burgeoning career as a thespian was put on hold when he joined the US army in 1943 to fight in the Second World War. He saw active service in the Pacific, with the 7th Infantry Division in the Aleutian Islands, and later, with the New York’s 27th Infantry as a chaplain’s assistant, during the infamous battle of Okinawa in 1945. Needles is said to have recited passages of Hamlet to himself in order to keep sane during the horror and bloodshed.

Needles returned to Canada after the war and resumed his career as an actor, moving from radio dramas to roles for television and the stage. He was also the manager for Lorne Greene’s Acting Academy and Dora Mavor Moore’s New Play Society. In 1946, he married Dorothy-Jane Goulding, his pen pal during his years fighting overseas, and together they would eventually have five children.

While working as an actor in Toronto, Needles attended an audition for the British director Tyrone Guthrie, who was looking for local actors to participate in the first season of the Stratford Festival. Needles ended up not even performing but Guthrie hired him on the spot, beginning the actor’s long and influential association with the festival. Needles made his debut during the first season of the Stratford Festival, in 1953, as Norfolk and the 1st Murderer in Richard III, and as Renaldo in All’s Well That Ends Well. He would proceed to appear in over 100 roles at the Stratford Festival over forty-seven seasons, under eight different artistic directors. Some notable roles include, Albany in King Lear (1964 and 1972) the White King in Alice Through the Looking Glass (1996), and Merriman in The Importance of Being Earnest (2000).

Needles also had an esteemed career as a stage, television and film actor outside of the Stratford Festival. He appeared in the Broadway hits Hadrian VII (1969) and Next Time I’ll Sing to You with James Earl Jones and Estelle Parsons. He performed in plays for the Manitoba Theatre Centre, the South Coast Repertory, and many other theatre companies throughout North America and England. He appeared in over a dozen films and memorably played Banquo in CBC’s 1961 film production of Macbeth alongside Sean Connery in the title role.

In 1957, Needles helped found the Actors' Fund of Canada (now called The AFC), which provides emergency financial aid for actors and art and entertainment professionals. The fund currently gives away more than $500,000 annually.

In 1974, Needles began to work as a visiting lecturer of drama at the University of California, Irvine. He was a beloved and inspiring teacher and mentor to many young actors, and his involvement and influence often extended far beyond the classroom. A number of his students went on to have illustrious acting careers, including Jon Lovitz, who based parts of his Saturday Night Live character, Master Thespian, on his former teacher.

Needles continued to act at the Stratford Festival until the age of 87, at which point he was Canada’s oldest working actor. The last roles he played before retirement at Stratford were Adam in As You Like it (2005) and Castruchio in The Duchess of Malfi (2006).