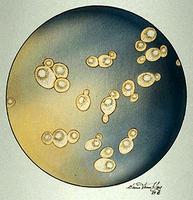 Most yeasts are ascomycetes, which multiply by budding in various ways or by transverse fission (artwork by Claire Tremblay).

A group of unicellular Fungi with at least 450 known species. Most yeasts belong to the subdivision Ascomycotina, which multiply by budding in various ways or by transverse fission, and may form ascospores in a naked ascus (saclike cell). They may form pseudomycelium or true mycelium. Some yeasts belong to the subdivision Basidiomycotina (Ustilaginaceae); some of these produce red or yellow carotenoid pigments (Rhodotorula spp). All reproduce asexually by budding, and sexually by formation of teliospores.

at genus level is based on the morphology of the spores and vegetative cells and, at species level, by the ability to metabolize different sugars and related compounds. Major genera include Schizosaccharomyces (fission yeasts), Saccharomyces, Kluyveromyces, Hansenula, Pichia, Candida, Rhodotorula and Cryptococcus, the latter 2 being basidiomycetes.

Although not as widely distributed as Bacteria, yeasts occur in terrestrial and aquatic environments worldwide in association with plants and animals. A few are pathogenic: Candida tropicalis and Cryptococcus neoformans cause infections in humans; C. albicans causes thrush and vaginitis. Patients treated with immunosuppressants are particularly susceptible to yeast infections. One yeast species is pathogenic for cotton.

The best-known yeast is Saccharomyces cerevisiae (common bread, brewing and wine yeast), used for leavening and brewing for thousands of years, although its role was unsuspected until the work of Pasteur. It is a source of B vitamins and a valuable research tool for biochemical and genetic investigations.

Other species have been used in biotechnological processes: treatment of wood pulp wastes, production of food and fodder yeast (single cell protein), production of SCP from whey and petroleum, production of gums (mannans), polyhydroxy alcohols (glycerol) and glycolipids. Yeasts may act as spoilage agents: Rhodotorula, for spoiling olives; Debaryomyces, preserved meats; and some Pichia, mayonnaise and sauerkraut.

Yeasts that are sugar-tolerant can cause explosive bursting of fondant-centered chocolates and spoilage of fruit-flavoured yogurts. Schizosaccharomyces octosporus often grows on dried dates, figs and raisins, without impairing their quality.