How Gilmore Junio taught his veteran teammate, and the country, the true meaning of sacrifice

Manon Rhéaume, hockey player (born 24 February 1972 in Lac-Beauport, Québec). Goaltender Manon Rhéaume was a pioneer in women’s hockey. In 1992, she became the first woman to try out for a National Hockey League (NHL) team and to play in an NHL game. In doing so, she also became the first woman to play in any of North America’s major sports leagues. Rhéaume also represented Canada in international women’s hockey. She was part of the World Championship women’s team in 1992 and 1994, and helped Team Canada win the Olympic silver medal in 1998, the first year that women’s hockey was included in the Olympic Winter Games.

Marie-Philip Poulin, hockey player (born 28 March 1991 in Québec City, Québec). Poulin is a three-time Olympian who holds the unique distinction of scoring the gold medal-winning goals for Canada at both the 2010 Olympic Winter Games in Vancouver and the 2014 Olympic Winter Games in Sochi. She was also captain of the team that won silver at the 2018 Olympic Winter Games in PyeongChang. The forward has also won a world championship and two Clarkson Cup titles in the Canadian Women’s Hockey League championships. The recipient of numerous honours and awards, Poulin is considered one of the world’s top players and has been compared to fellow Canadian Sidney Crosby.

In Conversation with Tessa Virtue and Scott Moir

In Conversation with Tessa Virtue and Scott Moir

Canadian women have participated in every Olympic Winter Games since their inception in 1924. The first Canadian woman to medal at the Games was figure skater Barbara Ann Scott, who won gold in 1948. Her success was followed by gold medals in such sports as alpine skiing (e.g., Anne Heggtveit in 1960 and Nancy Greene in 1968), speed skating (e.g., Catriona Le May Doan in 1998 and 2002 and Cindy Klassen in 2006), biathlon (Myriam Bédard 1994), and hockey (2002, 2006, 2010 and 2014). Canadian women have also excelled in Olympic sports such as bobsled, snowboarding, short track speed skating, freestyle skiing, and curling. Since the 1948 Olympic Winter Games in St. Moritz, Switzerland, Canadian women have won 105 Olympic medals, including 38 gold medals.

LET OTHERS OBSESS about Canada's slow medal start in the XXVIII Olympiad in Athens. The national baseball team has better things to do, both on the field and off.

Hollywood will no doubt make a movie about Wayne Gretzky some day, and it will have to include the scene where he plays his last game in Canada, in Ottawa against the Senators.
Mikaël Kingsbury

Mikaël Kingsbury, freestyle skier (born 24 July 1992 in Sainte-Agathe-des-Monts, QC). Mikaël Kingsbury won the silver medal in men’s moguls at the 2014 Olympic Winter Games in Sochi and the gold medal in moguls at the 2018 Olympic Winter Games in PyeongChang (see Freestyle Skiing). In International Ski Federation (FIS) World Cup competition, he has won seven Crystal Globes as the overall champion of freestyle skiing (2012–18) and the World Cup moguls title for seven straight years (2012–18). As of December 2018, he had won a record 50 World Cup gold medals and 74 medals overall in moguls competition, as well as seven medals at the world championships. Also in 2018, Kingsbury became the first freestyle skier to win the Lou Marsh Trophy as Canada’s athlete of the year.

Mark Lee McMorris, Canadian snowboarder (born 9 December 1993 in Regina, Saskatchewan). McMorris competes in both big air and slopestyle snowboarding. He won the bronze medal for Canada in men’s slopestyle at the 2014 Olympic Winter Games in Sochi and the 2018 Olympic Winter Games in PyeongChang, as well as silver in men’s slopestyle at the 2013 FIS Snowboarding World Championships. He has also won multiple gold medals on the World Cup circuit and at the Winter X Games, Dew Tour and the Burton US Open Snowboarding Championships.

Guy Damien Lafleur, OC, CQ, hockey player (born 20 September 1951 in Thurso, QC). Lafleur is one of the most offensively skilled Montreal Canadiens players of all time.

On 15 April 1947, Jackie Robinson played in his debut game with the Brooklyn Dodgers, becoming the first African American to play in the major leagues in the modern era. Prior to that point, professional baseball in the United States was segregated, with African Americans playing in the Negro leagues. When Robinson broke Major League Baseball’s colour barrier in 1947, he entered American history books. What many baseball fans may not realize, however, is that Robinson was embraced by Canadian fans one year earlier as a member of the Montreal Royals, a farm team for the Brooklyn Dodgers.

John “Johnny” Bright, football player (born 11 June 1930 in Fort Wayne, Indiana; died 14 December 1983 in Edmonton, AB). One of the most talented running backs in the history of the Canadian Football League (CFL), Bright seemed destined for a career in America’s National Football League (NFL). A top college player in the United States, he was attacked during a National Collegiate Athletic Association (NCAA) game in his senior year (1951); most people, including Bright, believed the attack was racially motivated. He was drafted by the NFL’s Philadelphia Eagles in 1952 but accepted an offer from the Calgary Stampeders instead. Bright played 13 seasons (1952–64) in the CFL with the Stampeders and Edmonton Eskimos. In 1959, he became the first Black player to win the CFL’s Most Outstanding Player award. Bright holds the Eskimos franchise records for most rushing yards in a career (9,966) and most rushing yards in a season (1,722 in 1958).

This article was originally published in Maclean’s magazine on January 12, 1998. Partner content is not updated.

Ducking out of the freezing rain on a bitter Chicago night, the woman once dubbed Canada's Sweetheart arrives at Hugo's Frog Bar to a movie star's welcome.
Marilyn Bell 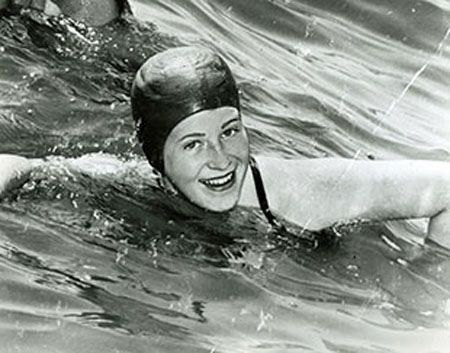