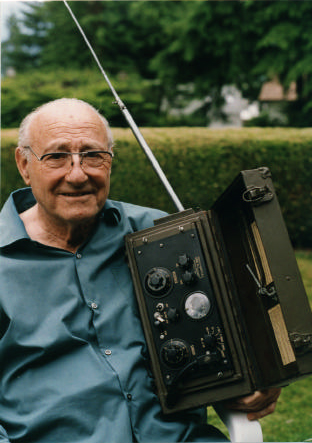 Donald Lewes Hings, MBE, CM, inventor, engineer and telecommunications pioneer (born 6 November 1907 in Leicester, United Kingdom; died 25 February 2004 in Burnaby, BC). Donald Hings contributed to the development of electronic and geophysical technology for more than 60 years. He was the originator of more than 55 patents in Canada and the United States, but he is perhaps best known for his invention of the radio frequency system commonly known as the “walkie-talkie.” The walkie-talkie was adopted by the armed forces of Canada, the United Kingdom and the United States and was credited with providing soldiers with a reliable means of battlefield communication and saving the lives of untold numbers of Allied soldiers during the Second World War. Hings’s groundbreaking work opened the door for many of the radio frequency and communication systems used in the present day. (See also Telecommunications.)