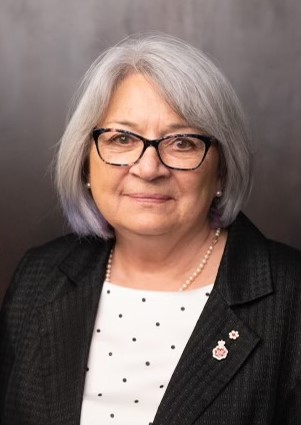 Mary Jeannie May Simon (Ningiukudluk); diplomat, civil servant, (born 21 August 1947 in Kangirsualujjuaq, Nunavik, QC). Simon is an advocate for international cooperation in the Arctic and Indigenous education and rights. She has held multiple roles in the civil service, including secretary and co-director of policy of the Royal Commission on Aboriginal Peoples, secretary to the board of directors of the Northern Quebec Inuit Association, and member of the Nunavut Implementation Commission. She was also the first vice president of the Makivik Corporation and the first Inuk in Canada to hold the rank of ambassador. Simon has served as the president of Inuit Tapiriit Kanatami and of what is now the Inuit Circumpolar Council. On 26 July 2021, Simon became Canada’s 30th Governor General and the first Indigenous person to serve in that role.

Speech from the Throne

Speech from the Throne

The Speech from the Throne declares a government’s agenda for a new session of the legislature. The speech contains comments on the state of the country or province and outlines the matters on which the government will seek action. The monarch or their representative — the governor general federally and the lieutenant-governor provincially — delivers the speech; but it is entirely the work of the Cabinet ministers.