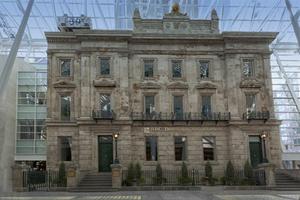 The Allen Lambert Galleria comprises 16 freestanding steel supports branching out into parabolic shapes reminiscent of a forest canopy, typical of Calatrava's "biomorphic" style. In Heritage Square, in the east section, another 16 supports branch out in a similar fashion.

The Clarkson Gordon Building, also known as the Heritage Building, originally built in 1844 on Wellington Street just north of where the property rests today, was disassembled stone-by-stone, restored and incorporated as part of the Galleria. This structure has been home to several financial institutions including the Commercial Bank of the Midland District and Merchants Bank.

Calatrava's belief in the power of architecture to define a place, such as the onion domes of Saint Petersburg or the minarets of Istanbul, is beautifully exemplified by his award-winning Galleria at Brookfield Place.