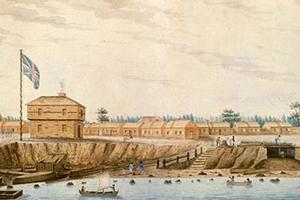 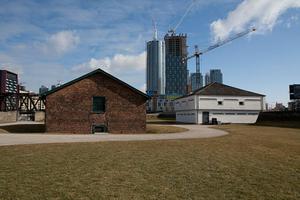 "The Birthplace of Toronto"

Joseph Bouchette made a formal survey of the harbour of Toronto in 1793. He noted the untamed aspect of the country and the "beautiful basin." It was Upper Canada's Lieutenant-Governor, John Graves Simcoe, who had ordered the survey. He had settled on the harbour as he found it to be "without comparison, the most proper for an arsenal...that can be met with in this province."

On July 30, a garrison arrived under a favourable gale and set up under canvas near the site of an old French trading post. Simcoe feared an American attack and he believed the site more defensible than Niagara (see Niagara-on-the-Lake) or Kingston. He had a little town laid out by the harbour, naming it York, and soon it became the capital of Upper Canada.

Simcoe was unable to make the fort as strong as he wanted but as war approached, General Isaac Brock improved it in 1811. Today's west wall and circular battery date from that time. Nevertheless, the fort fell to the Americans on 27 April 1813. After another raid that July, the British began rebuilding the site. The fort remained Toronto's primary harbour defence until the 1880s. It housed a military garrison until the early 1930s.

Long obsolete, the fort was restored as a Depression-era relief project and opened as a public museum in 1934. Fort York National Historic Site of Canada now contains Canada's largest collection of authentic War of 1812 buildings.