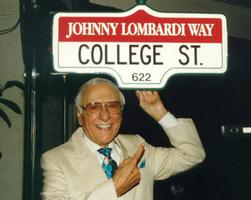 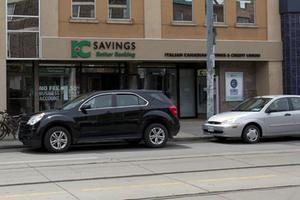 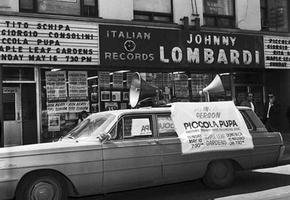 Johnny Lombardi opened a grocery store after he returned from service in the Second World War. But it was in advertising the store that he was inspired to his real passion: broadcasting. His CHIN radio and television stations would eventually produce programs in 32 languages; Lombardi not only pioneered multilingual radio, he helped pioneer multiculturalism years before it became official policy.

Lombardi was born in Toronto's Little Italy (see Toronto). During the 1930s, he was lead trumpet in the popular Benny Palmer Orchestra. He joined the army in 1942, reached sergeant and participated in the D-Day invasion. He also entertained troops.

In 1946, he opened Lombardi's Supermarket on College Street and became known as the "unofficial mayor of Little Italy." He launched CHIN Radio in 1966, followed by CHIN FM in 1967. The stations' identity, he explained, was based on "C is for Canada, H for happiness, I and N for international."

Besides his radio fame, Lombardi was known for his television program and, infamously, for the CHIN picnic bikini contests at the CNE. He may have seemed all fun in his baseball cap and ready smile, but he was taken seriously. He received the Order of Canada in 1981 and officially represented Canada at the D-Day commemorations in 1964. On his death in 2002 he was praised for his role in transforming urban society in post-war southern Ontario into one truly inclusive of diversity.