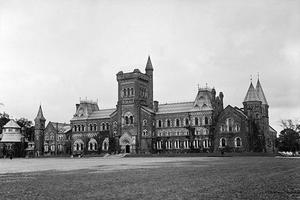 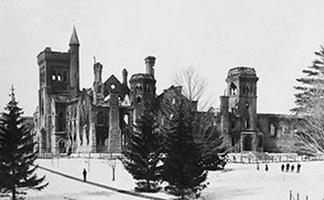 "Out of the Ashes: University College Rebuilt"

As part of University College's Literary and Scientific Society's annual Conversazione Ball on 14 February 1890, a display of "bacteriological and other microscopic slides" were to be presented among the scientific attractions. Some of the lamps required for lighting the microscopes were upset, sending a trail of flaming oil along the wood floor, which quickly caught and enveloped the main part of the building. By the time the blaze was put out, it had consumed the main tower, east wing, 30 000-book library, museum and administrative offices of one of Toronto's most important buildings. As University of Toronto chancellor Edward Blake put it, University College was left "a ruin tottering to the ground."

Thanks to grants from the provincial and federal governments and private donations from Canada and abroad, the college, which had been established as the non-denominational teaching arm of the university in 1853, was rebuilt within two years. Building upon surviving walls and foundations, the reconstructed college was later deemed by William Dendy and William Kilbourn in their book Toronto Observed to be "not only the crowning glory of architecture in Toronto" but "perhaps the finest building in Canada." 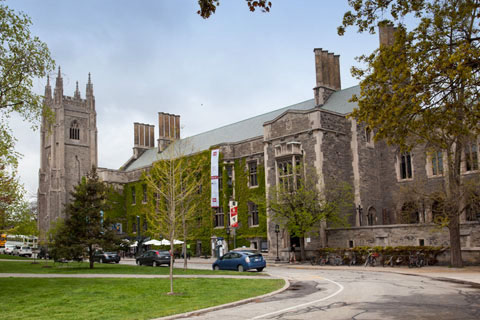