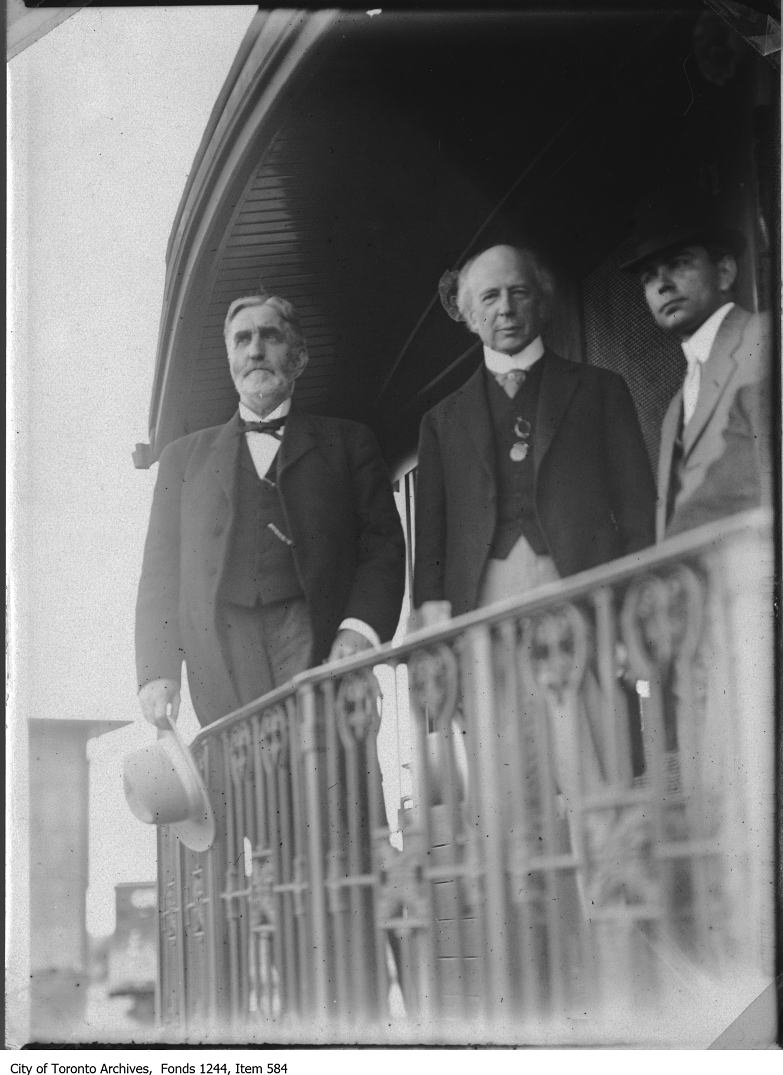 I have an advantage over His Excellency, the Governor General, who visits this City of Edmonton for the first time: I come here for the second time. It is many years since I was here before, so many years that probably you have forgotten it, but I have not. It is just eleven years this month of September. It was in 1894, when it was a privilege for the first time to visit this immense portion of our common country, which extends from the western shore of the Lake of the Woods to the Rocky Mountains, which was known as Rupert’s Land and the Northwest Territories, and which today is springing into existence to take its rank and stand in the Confederation of Canada as the two provinces of Alberta and Saskatchewan.

Eleven years have passed and if someone had told me at that time that my next visit to the City of Edmonton would be in con­nection with the auspicious event which has brought me here today, His Excellency the Governor General and this throng not only from the province but from the neighbouring province of Saskatchewan, from Manitoba, and from the provinces of the east, and I am proud also to say from our neighbour to the south, the American Republic, I am sure if this had been prophesied then, I could not have believed it.

Eleven years have passed and as had been hinted a moment ago by the new Lieutenant Governor of Alberta, many and many changes have taken place. In 1894 expectations which you indulged in of rapid development for this new territory had not been realized. The sun shone, the rain fell, the soil responded generously to the efforts of the farmer, but markets were far, the means of access were few, the profits of the farmer were scanty and small. Agriculture, upon which all wealth is derived, was sorely depressed, and it being depressed, everything suffered in consequence.

The City of Winnipeg, the pioneer city, after making a splendid start, had reached the rank of a provincial town and seemed to have reached its further possibility. The five cities which now adorn the new provinces, Regina, Moose Jaw, Calgary, Edmonton, and Prince Albert, were nothing but struggling villages. You know as well as I do that at that time Regina had nothing royal but its name; Moose Jaw was not far removed from the primitive condition which its name implied; Calgary had made a splendid start but stood still.

Of Edmonton what shall I say? I am sure I will not offend the pride of any citizen when I say I could count upon the fingers of my two hands all the buildings, public and private, which then constituted your town, now the capital of Alberta. But now everything is changed. Gigantic strides are made on all sides over these new provinces.

Only eight years ago I had the honour of representing in Parliament the third largest city in Canada, the old City of Quebec; but now, I am sorry to say I have taken a back seat and that honour now belongs to the City of Winnipeg. But in the name of the people of Quebec let me say I am not jealous, and I may also say that the two largest cities of Canada, Toronto and Montreal, if they are going to keep their supremacy had better look out – or to use a western phrase, they had better hustle right away.

Nor is this all. Sir, if I look about me in the vast sea of upturned faces I see the determination of a young and vigorous people: I see the calm resolution, the courage, the enthusiasm to face all difficul­ties, to settle all the problems which may confront this new prov­ince. And, if it be true everywhere, it must be more true here in this bracing atmosphere of the prairie that “hope springs eternal in the human breast.”

Now, gentlemen, what is the cause of this change? Well, sir, if I were addressing a political audience perhaps I might find many causes for this change. Perhaps also there might be gentlemen on this board platform who cannot agree with me upon these reasons, but this is not a day of political controversy, this is a day of national rejoicing. This is a city where today we only remember one thing – that we are Canadians and British subjects. Therefore, ladies and gentlemen, I will abstain from going into the causes. But, sir, whether we agree or whether we disagree, there is one thing which we all admit; that the prosperity of this new province, past, present, or future, is undoubtedly connected with the question of transportation, with railway facilities. Well, sir, I will not go fur­ther, because perhaps I might trespass upon the ground from which I wish to abstain.

But, gentlemen, in order to bring out this new province to the standard which we expect it to attain, it is necessary that we should have the hearty co-operation of all the people, of all the citizens of Alberta. We must have the co-operation of the old settlers, of the pioneers, the old pioneers chiefly from the province of Ontario who came here when the last was a desert and made the desert to smile. We must also have the co-operation of the new citizens who come from all parts of the world, to give to Canada, and to Alberta, the benefit of their individuality, of their energy and their enter­prise, and since it happens that I have the honour of occupying the position of fist servant of the Crown of this country, let me say on behalf of the Crown and with the concurrence of His Excellency, that to these new fellow countrymen, to these new subjects of the King, I offer the most cordial welcome. I welcome those of our kith and kin from the old land. I welcome those from the older portions of Europe. I welcome those who come from the neighbouring, the kindred Republic on the other side of the line.

Let me say to one and all, above all those newly our fellow countrymen, that the Dominion of Canada is in one respect like the Kingdom of Heaven: those who come at the eleventh hour will receive the same treatment as those who have been in the field for a long time. 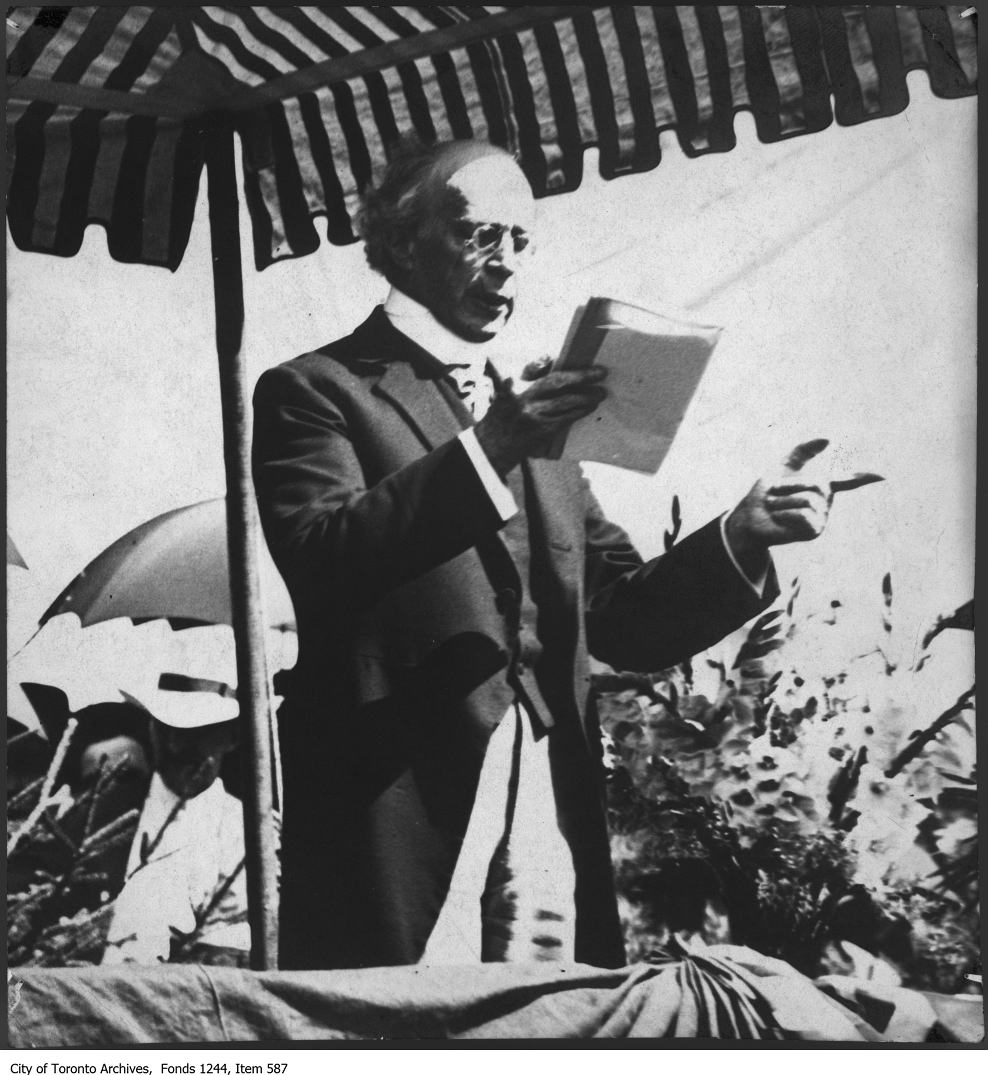