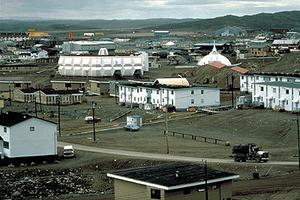 Iqaluit is near a traditional South Baffin Inuit fishing camp, where a summer camp was established each year to fish (photo by Barbara Brundege and Eugene Fisher).\r\n

The modern market system and other features of Canadian culture have penetrated most Aboriginal communities to such an extent that the traditional subsistence way of life is being redefined as socially inferior, as "unemployment" and "poverty." Thus, with the added factors of an increase in the Aboriginal population and the depletion of game in some areas, people leave hunting, fishing and fur trapping to find "real employment" and the more materialistic way of life in the towns.

A semiurban life in large villages was indigenous among the agricultural Huron-Wendat and Haudenosaunee in the east and the coastal Salish, Nuu-chah-nulth, Kwakiutl and Tsimshian in BC. This heritage may have prepared people from these societies to live in cities somewhat more successfully than Aboriginal people with a seminomadic hunting heritage. According to the 1996 Indian Register, 42% of the registered Indians live off-reserve. The population of registered Indian bands has become urbanized because they are located adjacent to or within urban centres.

According to the 1991 Aboriginal People's Survey, the percentage of adults who reported having changed communities at least once in their lifetime was 22% in Ontario, 21% in BC, 14% in the Prairies, 9% in Québec, 8% in the Maritimes and 2% in the North. Thus, the level of off-reserve migration is high in Ontario and BC, moderate in the Prairies and low in Québec, the Maritimes and the North. The high rates of migration have come from the bands that are smaller in size, have a tradition of working off-reserve and have poor on-reserve opportunities, higher education levels, more integrated schools and a poorly developed First Nations government.

In the Aboriginal People's Survey, there were 40 330 Indians and 14 590 Métis who reported at least one move within the last 12 months. Of these individuals, 22% of Indians and 17% of Métis had moved from a different community within Canada.

The Inuit are more isolated from the major urban centres than First Nations and Métis. They also adhere to a more traditional way of life. It is not surprising, then, that they are less likely to be drawn to the city. In the Aboriginal People's Survey of 1991, there were 3445 adult Inuit who moved during the 12 months prior to the survey. For those who moved within this time period, 29% moved from a different neighbourhood but the same community and only 11% moved from a different community within Canada.

The implementation of Bill C-31 in 1985 has contributed to the high growth rate of the off-reserve population since 1985, as many Aboriginals residing in off-reserve areas who had lost their Indian status could reclaim their ancestry. In 1985, a potential 76 000 women and their children who lost Indian status through marriage were eligible for reinstatement under the provisions of Bill C-31. As a result, over 100 000 people have been added to the Registered Indian population. According to the 1996 Indian Register, the off-reserve population increased from 147 424 in 1987 to 256 505 in 1996. The current distribution of the off-reserve population across Canada is as follows: 34% in the Atlantic region, 29% in Québec, 49% in Ontario, 39% in the Prairies, 49% in BC and 37% in the North.

The expansion of medical, educational, housing and business services on reserves has supported the desire to maintain at least a nominal residence on a reserve. Many of these people are also trying to be accepted by their ancestral bands and to re-establish residences on-reserve. Although direct information is unavailable, it is highly likely that in the last 10 years or so there has been a fair amount of migration from city to reserve . According to the 1991 Aboriginal People's Survey, the number of Aboriginal adults who had ever changed residence increased from 40 020 between 1981 and 1985 to 140 300 between 1986 and 1990. It is likely that a significant proportion of these movers had been involved in return migration to a reserve.

The Report of the National Round Table on Aboriginal Urban Issues (1993) focused on the concerns and issues that confront Aboriginal people who migrate to urban areas. It recommended the following key service areas that would address some of the concerns of the Aboriginal urban population: education, addictions, disability, AIDS, homelessness, child welfare, social services, health, employment and housing, cultural awareness/isolation and street youth (see Indigenous People: Education; Indigenous People: Health; Indigenous People: Social Conditions). It also stressed that culturally appropriate services must be adapted to the lifestyles and the customs of the Aboriginal individuals and communities.

The development of urban Aboriginal institutions (Québec has a unique, more assimilating, urban pattern) can generally be identified in four categories: social services provided by the mainstream community; popular family-oriented kinship-friendship networks as Aboriginal people themselves take over social services such as court work, support for addictive behaviours and social work as needed; an elaboration of artistic, educational, political, recreational and religious voluntary associations; and the development of academic and professional services by Aboriginal people. More importantly, cultural creativity can be seen in the new kind of Aboriginal society that is developing in urban Canada.

Studies across the country show that housing shortages, increased population and the lack of jobs on the reserves are the most common reasons why Aboriginal people migrate to urban areas when they are young. Some urban Aboriginal people correspond and return regularly to their reserves while others settle permanently in the cities. Successful urban adaptations are related to several factors: the cultural background of individuals according to the traditional evolutionary level of their Aboriginal social heritage; historical elements such as the length and intensity of non-Aboriginal contact; the urban proximity of their communities; the local quality of receptivity such as the extent of anti-Aboriginal prejudice and discrimination; and the extent of involvement of urban Aboriginal institutions in the city they move to.

A regional ranking of successful urban adaptations starts high with Québec, where few Aboriginal people leave reserves but are relatively well received when they do move; next are southern Ontario, southern Alberta and Vancouver; then BC, the Yukon, the Northwest Territories and the Maritimes; and finally, northern Alberta, Saskatchewan, Manitoba and northern Ontario, which have the poorest urban adaptations because of widespread racism, simply organized band societies, low urban proximity and relatively immature urban Aboriginal group institutions.

Urbanization across the Arctic, from Siberia to Greenland, has been a process of concentration from hundreds of very small seminomadic Aboriginal hunting groups into dozens of permanent villages and a few large communities such as Inuvik and Iqaluit. Since Inuit and other elements of the population must live co-operatively in the same communities, people get to know each other and there is less prejudice and discrimination than in the northern part of the Prairie provinces, where Aboriginal people and Métis tend to live on-reserve or in other communities segregated from the non-Aboriginal population. In the Arctic, where there is a high turnover of workers in boom-town conditions, social problems tend to develop more within these large towns, as at Tuktoyaktuk, the base for oil exploration in the Beaufort Sea.