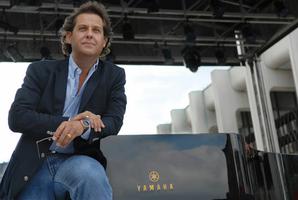 Alain Lefèvre, OC, COQ, pianist, composer, broadcaster (born 23 July 1962 in Poitiers, France). Alain Lefèvre is a world-renowned virtuoso pianist and a passionate promoter of Canadian music. He has performed in more than 40 countries with the world’s leading conductors and symphonies, and Juno and multiple Félix Awards for his many celebrated recordings. He hosts an influential radio program on Radio-Canada, and has generated international interest in Canadian music and composers, particularly the work of André Mathieu. He has been made a Knight of the Ordre National du Québec and the Ordre de la Pléiade, and an Officer of the Order of Canada.

A child prodigy, Lefèvre was born in France to Canadian parents. Part of a musical family, his three brothers, Philippe (piano), Gilles (violin) and David (violin), also became professional musicians. Alain was introduced to music at age four by his father, a clarinetist, and began studying piano at the École normale de musique’s Marguerite-Bourgeoys College in Montréal at age five, shortly after his family moved to Canada in 1967. At age six, he won first prize at the Canadian Music Competition and gave his first recital at the Grand Théâtre in Québec City. At nine, he won first prize in the Heintzman Piano Competition and was heralded as a “star of tomorrow” by the Montreal Star.

Despite his many early successes, Lefèvre has insisted that “nothing in my career was easy. I never was a ‘skyrocket’ pianist. Every step was tough.” Regardless, he won first prize at the annual Canadian Music Competition eight more times, and took master classes in France with Jeanne-Marie Darré and Lucette Descaves. From 1979 to 1983, he studied at the Paris Conservatory with Pierre Sancan, who called Lefèvre “one of my most brilliant disciples.” At the conservatory, he also studied composition with Pierre Max Dubois and Geneviève Joy.

In 1980, following his graduation from the Paris Conservatory, he earned the Grand Prix at the Concours International Alfred-Cortot in Milan. He gave the first of a series of recitals in Paris with violinist Christian Ferras in March 1982, but this promising collaboration came to a tragic end when Ferras committed suicide in September of that year. Lefèvre and his brother, Gilles, who had studied with Ferras, were among the performers in a tribute concert to Ferras on 4 October 1982.

Lefèvre performed in Germany, England, Belgium, Portugal and Turkey prior to settling in Montréal, where he made his debut in 1984 with the McGill Chamber Orchestra. In 1987, he became the first Canadian to play at the Salle Pleyel in Paris with the Orchestre des Concerts Pasdeloup, and returned in 1989.

Lefèvre has appeared as guest soloist with major orchestras in Canada and internationally including the Montréal, Toronto and Québec Symphonies, the Royal Philharmonic Orchestra (London), at the Royal Albert Hall and Royal Festival Hall, the London Mozart Players, the Orchestre National de France at the Théatre des Champs-Élysées, the Orchestre Philharmonique de Monte-Carlo, the China Philharmonic Orchestra, the Malaysian Philharmonic, the Hambürg and Stuttgart Symphonies, the Detroit Symphony, the National Symphony (Washington D.C.), the Houston Symphony, the National Symphony Orchestra of Mexico and the Moscow Virtuosi. He has performed with conductors Franz-Paul Decker, Charles Dutoit, Christoph Eschenbach, Lawrence Foster, George Hanson, Bernhard Klee, Yannick Nézet-Séguin, Jukka-Pekka Saraste, Vladimir Spivakov and Yan Pascal Tortelier, among others. He has also participated in many festivals in Europe, Canada and the United States.

Lefèvre started composing at age 16 and is an associate composer with the Canadian Music Centre (CMC). His compositions have been recorded for the CMC’s CentreStreams online resource. Audiogram released his Lylatov (2000) and Carnet de Notes (2002), while Blissfully Sleepless appeared on the Analekta label. (2006).

Lefèvre has recorded an impressive number of CDs and covered a vast repertoire as a solo pianist, with orchestra, and as a chamber musician. His first recording, of John Corigliano's Piano Concerto (1994), remains the benchmark version of that work. Lefèvre has garnered numerous Félix Awards and won a Juno Award in 2010 for an album featuring the work of André Mathieu, Shostakovich and Mendelssohn. His 2012 concert and recording of François Dompierre’s 24 Préludes won a Félix Award, and was named Event of the Year and Album of the Year by La Presse’s classical music critic, Claude Gingras.

With his violinist brother, David, he has recorded sonatas by Guillaume Lekeu and César Franck, as well as Mathieu's Ballade-Fantasie, which won a Félix Award in 2009. Lefèvre has long been a champion of the music of Mathieu, a composer he has both researched and recorded. He contributed to a biography of the composer by George Nicholson (Québec Amérique, 2010), as well as the subsequent film, L'enfant prodige (2010), for which he served as music director, composer and pianist, performing all of Mathieu’s piano parts. In 2010, he opened the Canada Pavilion at the Shanghai World Expo with a performance of Mathieu’s work with the Shanghai Symphony Orchestra; and, in December 2013, he performed two Mathieu concertos at New York’s Carnegie Hall on the 70th anniversary of Mathieu’s last performance there.

Lefèvre began hosting a weekly Sunday morning program on Radio-Canada’s Espace musique in 2005; in 2010, he was named International Personality of the Year for Radio by the Association for International Broadcasting. Since 2005, he has served as Artistic Ambassador for the Festival International de Lanaudière, where he also performs annually. In 2008, he received the André-Gagnon Award for composition from the Société professionnelle des auteurs et des compositeurs du Québec (SPACQ).