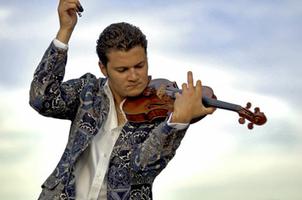 Da Costa, born to artistic parents of Portuguese background, began his career as a child prodigy on both violin and piano and gave his first concerts at the age of nine. He attended the École Secondaire Pierre Laporte, a Montréal high school with a strong music programme, and continued his formal music education at the CMM and the Université de Montréal. He then decided to focus on violin, and pursued his studies in Madrid (1998-2001) with the eminent violin pedagogue Zakhar Bron.

Da Costa has made radio broadcasts for the BBC, Westdeutscher Rundfunk (WDR), the CBC, Radio Nacional de España (RNE), Austria State Radio (ORF), and TV Asahi Japan, among others. His repertoire is very far-reaching, ranging from standard concertos (Bach, Mozart, Beethoven, Brahms, Dvořák, Sibelius) to those less frequently performed including compositions by Glass, Nielson, Janácĕk and Korngold. He has recorded the premieres of violin concertos by the Portuguese composers Luis de Freitas Branco and Armando José Fernandes with the Extremadura Symphony Orchestra (Spain) that received a 2006 Juno nomination.

About 2005, Da Costa returned to Montréal although he continues to concertize internationally. His recital repertoire ranges from Albinez to Ysaye in works for solo violin and in chamber ensembles. He has collaborated frequently with such pianists as Wonny Song, Louise-Andrée Baril, Matt Herskowitz, and Anne-Marie Dubois as well as harpsichordist Luc Beauséjour at the Glenn Gould Studio, the Orford Arts Centre, Salle Claude-Champagne, and in Stratford, Ont., Vancouver, and elsewhere.

Da Costa has played on many exceptional violins: the 1689 "Baumgartner" Stradivarius through the Canada Council Instrument Bank, and the 1727 "Di Barbaro" Strad from the Canimex Foundation, an organization which also loans quality string instruments to gifted young artists.

Da Costa was a prize-winner in the Pablo de Sarasate International Competition (1999). He received the Sylva Gelber Foundation Award from the Canada Council (2002), awarded annually to the most talented Canadian artist under 30, and the Virginia Parker Prize (2010). Alexandre Da Costa was the youngest person to receive a Celebrating Outstanding Portuguese-Canadian Achievement (COPA) Award from the Portuguese-Canadian National Congress, and in 2006, that organization honoured him as Luso Canadian Artist of the Year.

Da Costa has also assumed some administrative roles. With Jean-François Rivest, he co-founded the Ensemble Camerata Orford (2009); he was spokesperson for the Festival classique des Hautes-Laurentides (2010); and he was named musical development director for the Canimex Foundation (2011).

In 2012 Da Costa won the Juno Award in the category Classical Album of the Year: Large Ensemble of the year/Soloist with Large Ensemble Accompaniment with the Orchestre Symphonique de Montréal for American composer Michael Daugherty's Fire and Blood, a concerto for violin and orchestra. Recorded for Warner's, the work was marketed in Québec under the Acacia label (ACA 2 0931) a local co-operative formed by Da Costa, pianist Wonny Song, and conductor Jean-François Rivest.