An air photo of the Central Experimental Farm (courtesy Agriculture and Agri-Food Canada).

These cattle are being grain-fed for about three months in preparation for slaughter. They are housed in separate pens to segregate the cattle by size, ownership, and sex. Image: Agriculture Canada. 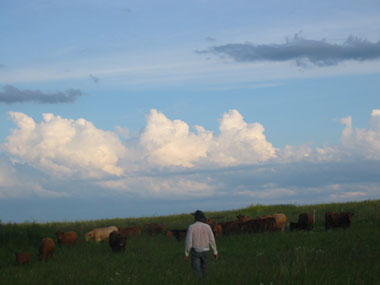 The science of animal breeding is defined as the application of the principles of genetics and biometry to improve the efficiency of production in farm animals. These principles were applied to change animal populations thousands of years before the sciences of genetics and biometry were formally established. The practice of animal breeding dates back to the Neolithic period (approximately 7000 BC), when people attempted to domesticate wild species such as caribou, goats, hogs and dogs.

Domestication was performed through controlled mating and reproduction of captive animals which were selected and mated based on their behaviour and temperament. Judging from cave paintings that have survived, selection was also applied to some qualitative traits such as coat colour and the absence or presence of horns. Without written records, there is no certain knowledge of the evolution of animal breeding practices, but written documents dating back more than 4000 years indicate that humans appreciated the significance of family resemblance in mating systems, recognized the dangers of intense inbreeding, and used castration to prevent the reproduction of undesirable males. Progress in the performance of domesticated animals through these selection practices was very slow; improvements were mainly due to animals adapting better to their environments.

Robert Bakewell, an English animal breeder of the 18th century, is considered the founder of systematized animal breeding. He was the first to emphasize the importance of accurate breeding records, introduced the concept of progeny testing to evaluate the genetic potentials of young sires, and applied inbreeding to stabilize desired qualitative traits. He also promoted concepts such as "like begets like,""prepotency is associated with inbreeding" and "breed the best to the best." Bakewell and his contemporaries in Europe pioneered the development of diverse breeds of beef cattle, dairy cattle, sheep, hogs and horses.

Most livestock breeds with pedigree herd books and breed associations were established between the late 18th century and the second half of the 19th century. Colour, conformation, geographical origin and some production characteristics were the main factors that differentiated these breeds. Wide geographical redistribution of animal populations was also an important factor in the formation of new breeds, as invading armies, migrating people and traders transported livestock to new lands.

Animal breeding as a modern science belongs to the 20th century. Although numerous geneticists and biometricians have made significant contributions to the development of this science, J.L. Lush of Iowa State University is considered the father of the modern science of animal breeding. Lush and his students developed major scientific procedures applicable to the genetic improvement of farm animals.

Studies on crossbreeding were first performed at the University of Saskatchewan in 1930, under the direction of J.W. Grant MacEwan and L.M.Winters. Studies on quantitative genetics in Canada were initiated by Jack Stothart (1934). Since 1940, Agriculture and Agri-Food Canada research stations at Lacombe and Lethbridge, Alta, Brandon, Man, Lennoxville, Qué, and Ottawa have been active in animal breeding research. Among educational centres, the universities of Guelph, Alberta, McGill and Manitoba have been active in animal breeding research and training. The relative scarcity of scientists and active research centres in this field reflects the high cost of research on genetic improvement of farm animals.

Major crossbreeding studies and breed synthesis projects have included the investigations of R.T. Berg and associates at the University of Alberta and Howard Fredeen and associates at Agriculture and Agri-Food Canada. The results of long-term controlled selection studies in hogs by Stothart and Fredeen, in poultry by Robert Gowe (Ottawa), and in beef cattle by Berg and scientists at Agriculture and Agri-Food Canada demonstrated the effectiveness of systematic selection, and were all in agreement with theoretical expectations. The Lacombe breed of hogs was the first livestock breed developed in Canada, by Stothart and Fredeen. This breed is popular in many countries around the world.

During the past 2 decades, scientists at the University of Guelph (B.W. Kennedy, J.W. Wilton, L.R. Schaeffer), in cooperation with scientists at Agriculture and Agri-Food Canada, have made significant contributions in the development of modern statistical procedures to compare the genetic potentials of breeding animals (primarily males) by breed or by herd. These procedures use all relevant information available on an animal and its relatives in estimating its relative breeding value.

Show-ring standards, once accepted as authoritative criteria for breeding merit, have been gradually replaced by performance tests that objectively measure the differences among promising breeding animals for traits such as growth rate and production of milk, eggs or wool. Performance test stations have been established across Canada to evaluate the individual performances of male animals, primarily hogs and beef cattle, under standard conditions for growth rate, feed efficiency and carcass merit. Livestock exhibitions and fairs now serve primarily to promote breeds and to sell breeding animals that have met performance test criteria (see Agricultural Exhibitions).

Animal breeding research in Canada proceeds on several fronts. Work at McGill has emphasized the genetics of congenital defects in mammals, particularly humans (see Genetic Diseases). Guelph continues to contribute to the refinement of mathematical techniques for predicting the genetic potential of breeding animals. Genetic engineering techniques (recombinant DNA) have been applied in the production of new vaccines for livestock diseases at the Veterinary Infectious Disease Organization at the University of Saskatchewan. Biotechnologists are trying to identify the genes with major physiological and biochemical effects in farm animals. Incorporation of "desired" genes into the genome without disrupting normal physiological processes will be the challenging task of biotechnologists in the future. Work at other research centres embraces both theoretical and applied aspects of population genetics in studies of mating systems, performance testing and the biological interpretation of genotypic and phenotypic variation. Results of these investigations are published in numerous scientific journals, including the Canadian Journal of Animal Science.