Anne Heggtveit, alpine skier (b at Ottawa 11 Jan 1939). Following in the footsteps of her father and uncles, cross-country skiing champions and former Olympians, Anne Heggtveit started skiing at age 2 and by 7 was the senior ladies combined champion at Camp Fortune. At age 9 Heggtveit was inspired by another Olympian, Barbara Ann Scott, Canada's first Olympic gold medalist in figure skating. In 1954, at age 15, she became the youngest-ever winner in the half-century history of the Holmenkollen giant slalom in Norway.

On 26 Feb 1960 Heggtveit won Canada's first Olympic gold medal in Alpine Skiing in the slalom event. Since the world championships were a part of the Olympics at the time, her world slalom and alpine combined titles garnered her a total of 3 medals. In addition to her Olympic and world championship wins, she was the first-ever North American to win the prestigious Arlberg-Kandahar Trophy.

Having achieved her goal of a gold medal, Heggtveit chose to retire from competition soon after the Olympics. She pursued other interests, such as becoming a spokesperson for Dupont of Canada, one of the first athletes in the country to pursue advertising contracts. At age 50 Heggtveit completed a BSc degree and has since pursued many entrepreneurial endeavors such as photography and small business ownership. Heggtveit was inducted into Canada's Sports Hall of Fame in 1960 and was made a member of the Order of Canada in 1976. 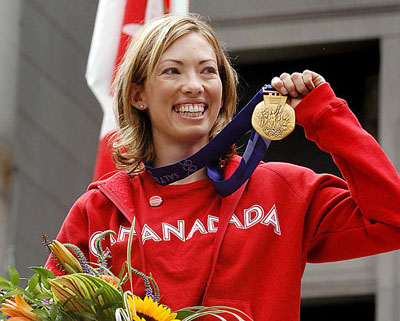