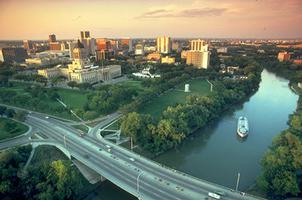 The river as it flows through Winnipeg (courtesy Canadian Tourism Commission).
The Assiniboine River, 1070 km long and with a mean discharge of 45 m3/s, rises in southeastern Saskatchewan. Fed by the Lilian and Whitesand rivers, it swells into Lake of the Prairies and flows southeast across the Manitoba border, where it is joined by the Qu'Appelle River and, 30 km southeast of Brandon, the Souris River. Joining the Red River at the "forks" in Winnipeg, it cuts a wide, scenic valley through the Manitoba Escarpment, and drains a broad, fertile plain that is one of Canada's prime wheat-growing areas.

La Vérendrye built Fort la Reine (1738) on the river near present-day Portage la Prairie. Its route was well travelled by fur traders, and after 1850 settlement crept westward from the forks, where light, dry soil offered excellent farming prospects. The river is navigable for some 500 km, and before the railway came, 7 sternwheelers plied its course from Winnipeg to Fort Ellice. The name, meaning "those who cook by placing hot stones in water," was taken from the Assiniboine who inhabited the area.