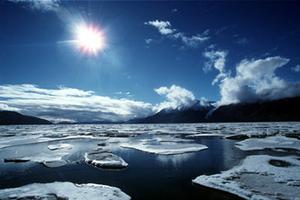 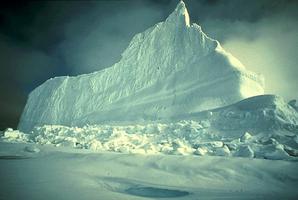 A piece of ice that has become detached from its parent glacier by a process known as calving (photo by Mike Boedel/courtesy Govt of NWT).
PreviousNext

Baffin Bay, 689 000 km2, is a deep body of water located between Greenland and Baffin Island. Water depths are generally less than 1000 m, but reach a maximum 2400 m near its centre. The bay is connected to the Arctic Ocean in the north through Nares Strait, Jones and Lancaster sounds, and to the Labrador Sea in the south by Davis Strait. Discovered by Robert Bylot in 1616, the bay was named after his chief pilot, William Baffin.

Circulation is generally anticlockwise; off Greenland, relatively warm, salty water moves north, while along Baffin Island, cold, fresher water originating from the Arctic Ocean flows south. Icebergs, formed by calving off the Greenland glaciers, appear year-round, but are most numerous in August. Extensive coverage by pack ice occurs seasonally from November to July. At the northern end of the bay, Canada's largest polynya, an area of open water surrounded by sea ice, provides an overwintering ground for belugas, walruses and narwhals. This polynya, the North Water, is an oasis of biological productivity in the spring and supports immense nesting populations of seabirds, such as thick-billed murres and dovekies.

Fishing began in the bay as early as 1650, and by 1900 intensive fishing by Europeans and Americans had depleted the bay's large whale population. Exploitation of other mammals (seals, walrus) as well as fish (cod, halibut, haddock, herring) has been very minimal.