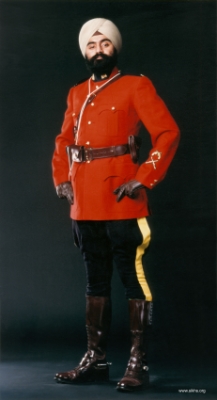 After a religious-rights campaign, Baltej Dhillon became the first RCMP officer allowed to wear a turban as part of his Mountie uniform.

Dhillon was born and raised in Malaysia and immigrated to British Columbia in 1983 at the age of 16. After he graduated from high school, he studied criminology. Although initially wanting to be a lawyer, he decided to seek admission to the RCMP after spending time at a Mountie detachment in Surrey, BC, where he volunteered as a translator for Asian immigrants. (See South Asian Canadians.)

Dhillon applied to the RCMP in 1988. Although he met the entrance requirements, he refused to abide by the RCMP dress code of the time, which banned turbans and required clean-shaven faces. As a Sikh, Dhillon's religious obligations required him to have a beard and wear a turban.

Instead of giving up his dreams of becoming a Mountie, or compromising his religious beliefs, Dhillon sought changes to the RCMP uniform policy.

The RCMP uniform had been altered before. In 1974, skirts and women's heels were introduced to accommodate female officers. In 1987, the RCMP had begun affirmative action policies aimed at recruiting visible minorities. The following year, in response to Dhillon's application, the RCMP Commissioner recommended removing the force's ban on beards and turbans.

The case was controversial, causing heated debate and protest across the country. Many critics felt that Canadian tradition was being sacrificed for the needs of immigrants. Others argued that wearing a turban could bring harm to the officer — such as a lack of respect, or the possibility that an assailant might try to strangle an officer with his own turban. In Alberta, one anti-turban campaigner produced and sold thousands of calendars lampooning changes to the RCMP uniform for ethnic or religious reasons.

Meanwhile, supporters of the change said the Charter of Rights and Freedoms guarantees Canadians freedom of religion, as well as freedom from discrimination based on religion or race.

In March 1990, the Progressive Conservative government of Prime Minister Brian Mulroney announced several changes to the RCMP dress code, including the introduction of trousers for female officers and the freedom to wear beards and turbans for Sikhs.

"Hopefully now I'll be able to continue on with my career goal of becoming an RCMP officer," Dhillon told the CBC at the time. "I will not have this stumbling block that would prevent me of one, practicing my religion, and secondly, serving my country Canada as an officer in the Royal Canadian Mounted Police."

Dhillon began police training with the RCMP in Regina, and graduated in 1991.

Dhillon went on to a long career as a Mountie. He served as an officer at the small RCMP detachment in Quesnel, BC, worked in Surrey as a specialist in interrogation and polygraph testing, and helped investigate the 1985 Air India bombing case. In 2016, he was an Inspector in charge of the force's Operational Readiness and Response program. Dhillon retired from the RCMP in 2019 but continued to work in law enforcement, joining the Combined Forces Special Enforcement Unit of British Columbia, an anti-gang agency.

A version of this entry originally appeared on Historica Canada’s Asia/Canada website.