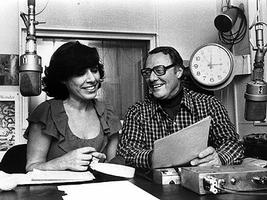 Barbara Frum, née Rosberg, radio and TV journalist (b at Niagara Falls, NY 8 Sept 1937; d 26 Mar 1992 at Toronto). Educated at the University of Toronto, she wrote for numerous magazines, performed on TV and radio in the late 1960s, and did thoughtful, incisive and often acerbic interviews with international figures on CBC Radio's popular phone-out show "As It Happens" from 1971 to 1981. Canada's most respected and best-known interviewer, she won many journalism awards. From January 1982 until her death she was a host of The Journal, CBC-TV's nightly current-affairs program.

Since her untimely death from leukemia at the age of 54 in 1992, she has been honoured and memorialized in numerous ways. She was awarded a posthumous Honourary Degree from the University of Toronto (May 1992) and in 1993 the Academy of Canadian Cinema and Television awarded her the John Drainie Award for Distinguished Contributions to Broadcasting. The Barbara Frum Public Library now stands in North York, a suburb of Toronto. In the new CBC building in downtown Toronto, the Barbara Frum Atrium now stands and, within it, a stunning commemorative sculpture in her honour, depicting both her career and her influence on radio and television broadcasting. There is an annual Barbara Frum Lecture, co-sponsored by both the University of Toronto History Department and the CBC. In 1996, Barbara Frum - A Daughter's Memoir, by Linda Frum, was published.