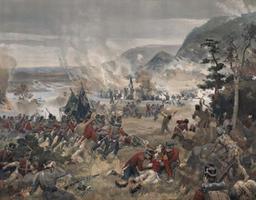 The Battle of Queenston Heights on 13 October 1812 was both a victory and a tragedy for the British and Canadian forces against the invading American army, and resulted in the death of Isaac Brock (foreground) (painting by John David, courtesy Library and Archives Canada/C-000273). 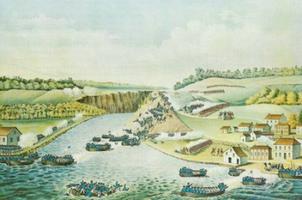 This 1836 engraving by James Denis shows American troops (blue uniforms) crossing the Niagara River and landing at Queenston. British and Canadian troops (red uniforms) under General Isaac Brock drove the Americans back to the heights (painting by James B. Dennis, courtesy Library and Archives of Canada/C-014614).
PreviousNext

The Battle of Queenston Heights National Historic Site commemorates a battle fought on 13 October 1812, when the British army and Canadian militia, assisted by First Nations allies, defeated an invading American army on the Niagara Escarpment overlooking the village of Queenston. This early campaign during the War of 1812 showed the British that Upper Canadians would fight to defend Upper Canada.

Queenston Heights was recognized very early as sacred ground. It was here that the first Brock's Monument was built in 1824. Today visitors can stroll through the beautifully maintained Queenston Heights Park operated by the Niagara Parks Commission. Visitors can climb to the top of the imposing second Brock's Monument and take a guided tour of the battlefield. In 1968, the Historic Sites and Monuments Board of Canada designated the battlefield as a national historic site.

Overview of the Battle of Queenston Heights

On 18 June 1812, the United States declared war on Britain and planned the conquest of Upper Canada. Part of the American strategy for the first year of the war was to capture Niagara (now Niagara-on-the-Lake, Ont) to use as a bridgehead for invasion and capture of the province. By October, they had assembled a large army on the New York side of the Niagara River under the command of Major General Stephen Van Rensselaer. Major General Sir Isaac Brock spread out his smaller defending force along the 55-km-long Niagara River. Brock knew that the Americans would strike but did not know exactly when or where. His strategy was to keep garrisons at vulnerable points and then concentrate his defenders when American intentions became clear.

On 11 October, the Americans began embarking troops at Lewiston, New York to cross the Niagara River to Queenston but this attack was aborted. Two days later, before dawn, the invasion was launched in earnest and the British defenders were pushed back allowing the Americans a foothold on Canadian territory. Brock at Fort George had initially feared that the pending assault on Queenston was a feint but the ferocity of the artillery fire convinced him that this was the site of the main invasion. He quickly rode off to take command at Queenston leaving most of the fort's contingent to follow.

Soon after Brock's arrival in Queenston, the Americans captured the strategic redan battery on the escarpment. Brock was killed in the early morning leading a counterattack to attempt the recapture of that key position.

British Major General Roger Hale Sheaffe, now in command, arrived with reinforcements from Fort George. He marched his men out of range of the American artillery in Lewiston and climbed to the top of Queenston Heights. Most of the American army had taken position here, kept pinned down by a small group of Mohawk and Delaware warriors. American reinforcements did not arrive as many of the militiamen assembled at Lewiston refused to cross into Upper Canada.

Joined by the British forces from Chippawa, Sheaffe fired a volley of musketry and launched a bayonet charge on the Americans. The poorly trained and now demoralized American army collapsed in panic. Many were killed trying to descend the escarpment or drowned trying to swim across the swift Niagara River to safety. Of the fewer than 1400 Americans who fought in the battle, more than 900 were taken prisoner. The British force engaged in the battle was equal in number to the Americans who had fought.

While Queenston Heights was an important victory for the British, the death of Isaac Brock represented a significant loss. However, Brock's memory continued to inspire Upper Canadians to defend their land against several subsequent American invasions.

Battle of the Châteauguay National Historic Site of Canada