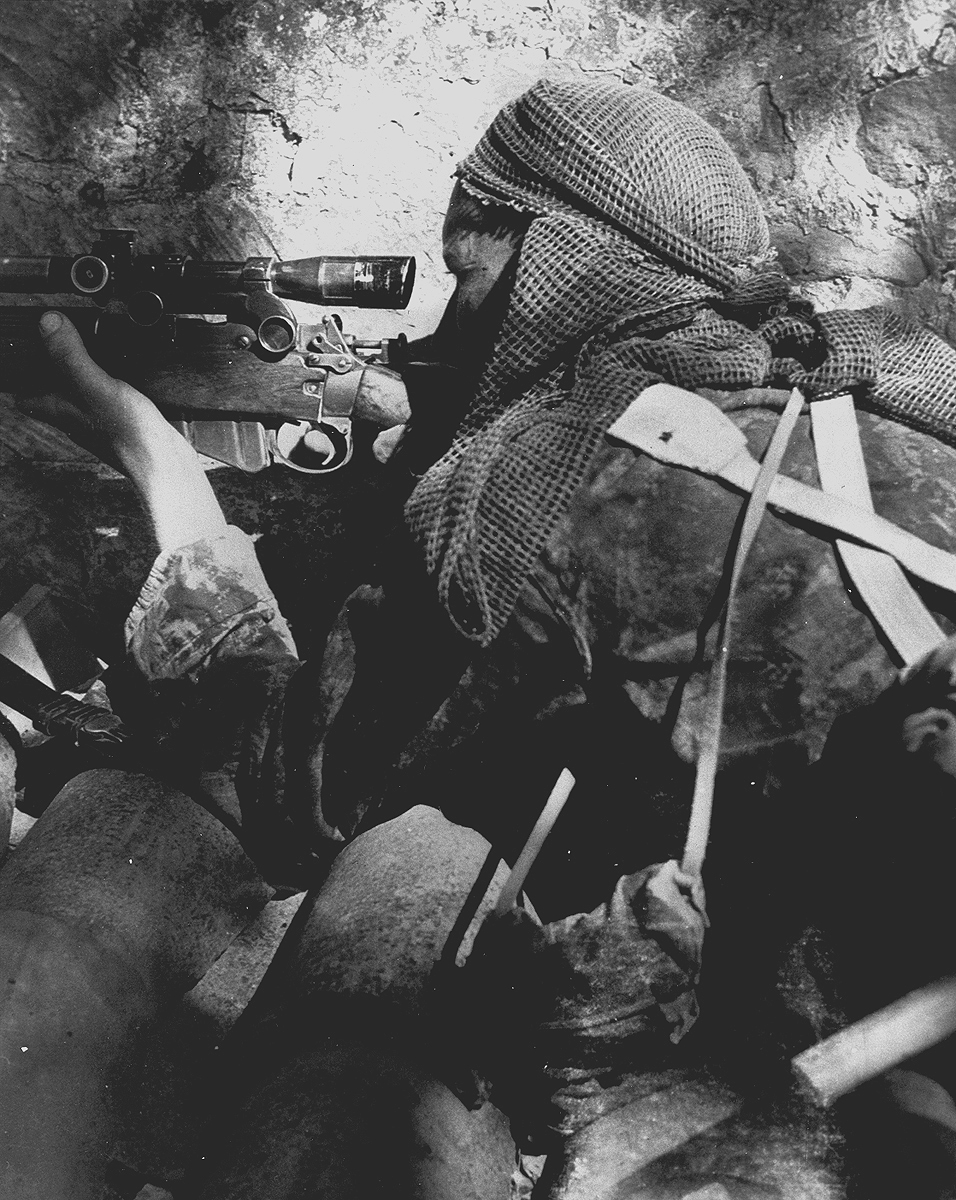 Private L.V. Hughes, 48th Highlanders of Canada, sniping a German position in 1944, near the Foglio River, Italy, during the Battle of the Gothic Line.

On 8 August 1944, I Canadian Corps undertook an elaborately secretive movement from the city of Florence eastward across the Apennine Mountains to the Adriatic coast. All troops stripped off their Canadian insignia, and vehicles were similarly disguised. Since the Liri Valley battles in April and May, German intelligence had concentrated on tracing the movements of the Canadians — believing their location would signal the site of the next major Allied Eighth Army offensive. The assumption was correct. I Canadian Corps was now considered the Army’s shock force.

In the early summer, the Allied command in Italy had intended for the next major offensive by Eighth Army to be launched from Florence through the northern dogleg of the Apennines. This section of mountains formed the anchor point for the last German fortified line in Italy — dubbed the Gothic Line. When it became clear that the German grip on the mountains was very strong, the planned offensive out of Florence was abandoned.

Instead, Eighth Army’s Lieutenant-General Oliver Leese decided to drive up the western coastal plain bordering the Adriatic Sea. Although the terrain here was more favourable for an attack, the coastal section of the Gothic Line fortifications had accordingly been made far stronger.

For the offensive, Leese placed the Canadians in the Army’s centre, with II Polish Corps to the right and V British Corps the left. These three corps were to break the line at the coastal town of Pesaro. They would then drive northward to the resort town of Rimini and the Po Valley beyond. Having gained the Po, Leese hoped resistance would collapse and be followed by a major northward retreat that would see the German hold on the Apennines broken across the breadth of northern Italy.

To bolster the coastal plain section of the Gothic Line, the Germans had developed a series of smaller positions in front of the main Line that created a deep defence. Each position lay behind a river, and together they extended north for 16 kilometres from the Metauro River to the Gothic Line proper. Within this section of ground all civilians were evacuated, and for the last 10 kilometres before the Gothic Line all roads, buildings and other possible forms of cover were demolished or levelled by bulldozers. The entire area was heavily sown with mines.

Behind this “kill zone,” as the Germans dubbed it, the Gothic Line’s main strength was meant to be provided by three belts of Panzerturms — tank turrets mounted on concrete foundations — that were protected on the flanks by machine-gun pits mostly sited inside concrete bunkers. However, only four Panzerturms, plus 18 smaller gun turrets, had been completed by late August.

On 25 August, the 1st Canadian Infantry Division led the corps attack by forcing a crossing over the Metauro. It took five days of hard, slogging fighting for 1st Division to push the Germans back from the Metauro to the first belt of the Gothic Line that stood behind the Foglia River. 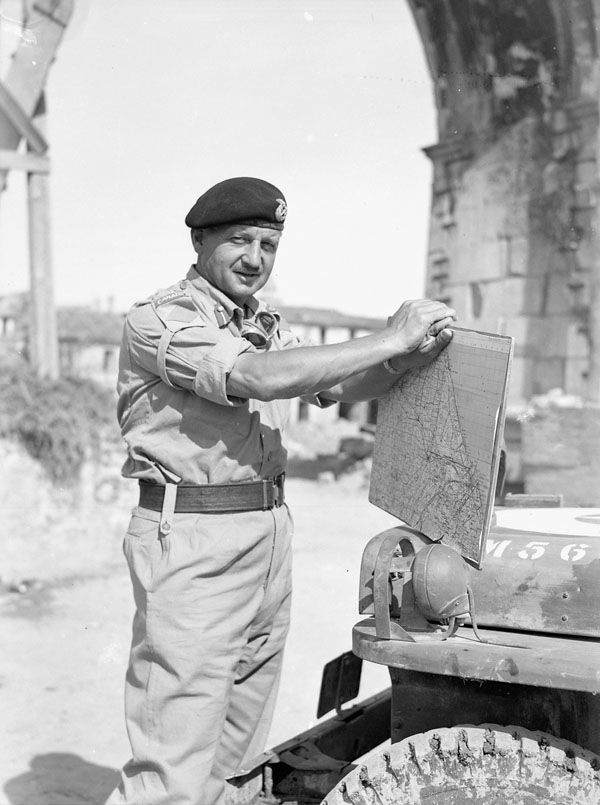 Lt.-Gen. E.L.M Burns, near Rimini, Italy, in September 1944, while leading Canadian troops during the Battle of the Gothic Line.

I Canadian Corps commander, Lieutenant-General E.L.M. “Tommy” Burns, planned a two-division operation to crack the Gothic Line. It was to be the normal Eighth Army effort: following a heavy artillery and aerial bombardment, infantry closely supported by tanks would advance close behind a creeping barrage to the objective. In this manner, Burns intended to break the Line and then keep pushing in deliberate set-piece attacks through one German defensive layer after another, until the Canadians reached the ancient Roman city of Rimini. Once Rimini fell, Eighth Army would be positioned to punch out into the Po Valley and turn the Apennine dogleg.

Even as this methodical plan was in the works, on 29 August, Major-General Bert Hoffmeister, the 5th Canadian Armoured Division’s commander, crawled onto a hillcrest overlooking the Foglia River. Instead of seeing fortifications swarming with Germans, the strong points appeared unoccupied. Hoffmeister realized the Germans had not yet reorganized from their fighting withdrawal of the past few days. Worn out divisions were being replaced by fresh ones and those were only just beginning to arrive.

Racing to Burns, Hoffmeister proposed that the Canadians “gatecrash” the Gothic Line with an immediate infantry attack to punch a hole in the Line through which tanks could be fed. Once the tanks were past the Panzerturms and other guns, the Line would have to be abandoned all the way from the sea to the Apennines. Burns agreed.

The following afternoon and evening, on 30 August, two regiments of the 1st Infantry Division — the West Nova Scotias and the Princess Patricia’s Canadian Light Infantry (PPCLI) — attacked on the right, while 5th Division’s Perth Regiment and Cape Breton Highlanders struck to the left. The West Novas were caught in a minefield and suffered heavy casualties. On the left, although the Cape Breton Highlanders were blocked, the Perths managed to capture a piece of tactical high ground called Point 111. They were the first Canadians to successfully punch into the Gothic Line. Meanwhile, the PPCLI got through the forward defences and managed to seize the heights of Points 115 and 133.

This success enabled 5th Division’s British Columbia Dragoons to carry out an unsupported tank charge five kilometres into the Gothic Line to Point 204, where a Panzerturm that could have destroyed the approaching Canadian Sherman tanks was found unmanned. Hoffmeister immediately sent the Lord Strathcona’s Horse armoured regiment to reinforce the Dragoons while the Perth Regiment followed with a forced march. By evening, the Strathconas had relieved the Dragoons, and the Perth Regiment’s arrival soon after cemented the Canadian hold on Point 204.

The ruins of the railway station in the seaside town of Rimini, Italy, September 1944, during the Battle of the Gothic Line.

A mid-September victory had been hoped for, but it was not until 21 September that the last German defensive position west of Rimini — San Fortunato Ridge — fell. This put the Canadians looking out over the Po River with hopes that 5th Division’s armoured regiments could still punch out into that open countryside and keep the Germans running right out of Italy.

Breaking the Gothic Line had cost the Canadians 4,511 casualties, 1,016 of them fatal. The early onset of fall rains would mire the coming planned armoured charge in a sea of mud. Even so, the Gothic Line offensive was one of the most important victories won by Canadian forces in the Second World War. But its significance was overshadowed by the equally momentous events in Normandy, as the Falaise Gap was closed at the end of August and the reeling German Army was soon pursued out of France. 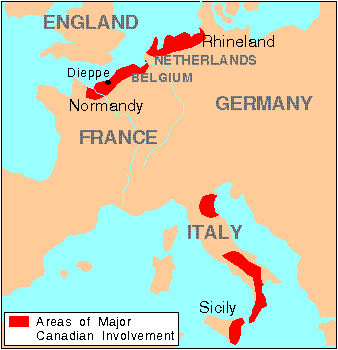 The Canadian advance through the Gothic Line would mark the last major Allied gains in Italy. Thereafter, fall rains and the onset of the worst winter to beset Europe in 50 years led to a grim stalemate across the Italian front.

Although the Italian campaign would continue until the spring of 1945, I Canadian Corps would be withdrawn from Italy in February, joining the First Canadian Army in its final campaigns across northwest Europe.

Canada and the Battle of Hong Kong

Canadian Soldiers and the Battle of Ortona