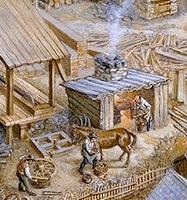 Shaping a horseshoe on an anvil in a blacksmith shop in Innisfail, Alberta, circa 1910 (courtesy Glenbow Archives).
PreviousNext

Until the mid-18th century, few ironsmiths practised their trade full-time. Those who repaired arms and tools in the forts and trading posts also engaged in the fur trade. During the same period other metalworkers became established in the towns and countryside. These craftsmen included locksmiths, gunsmiths, nailsmiths, cutlers, edge-tool makers and farriers, who shod draught horses and oxen, polished runners, put metal rims on wheels and repaired various objects.

All these workers practised a technology that came from the great French craft tradition; their highly skilled art derived from trade guild knowledge, instruction and scientific treatises. Apprenticeship, usually lasting 3 years, was rigorous and entry to the trade was virtually restricted to the sons of ironsmiths, the descendants of other tradesmen, orphans under religious guardianship and the sons of protected habitants.

In English Canada, the first blacksmiths were brought to Canada by the HBC in the . Young journeymen were brought from England to help build trading posts and to make and repair goods that would be too costly to ship from England.

Metalworkers were important in society and set up business mainly in the major centres, clustering in the same parts of the town. At the end of the 17th century, they incorporated farming and animal husbandry into their trade. Around the mid-18th century, about one-quarter of these artisans changed occupations to become carpenters, masons, merchants or contractors.

The various craftsmen produced work of high aesthetic and technical quality: their products were as remarkable for their symmetry and proportional motifs as for their complex mortice-and-tenon joints, reinforced by dowels and flanges. Their work drew its inspiration from religious symbols or copies of well-known motifs. Their customers were mainly religious communities, factories, administrators, merchants and wealthy families.

In the early 19th century, most of the iron trades in rural areas tended to be performed by separate craftsmen. Around 1850 the blacksmith's shop became the new reality: here a single craftsman performed all the varied forms of ironwork that could no longer support those who practised the individual crafts. Although the blacksmith made objects that were less refined than those of his predecessors, he built a unique technology based on knowledge derived from the various iron trades and from skilled habitants, blacksmiths from Ireland, Scotland and England, and artisans who had worked with metal in small American industries (eg, quarries, brickworks).

Blacksmiths were particularly important in the new towns that sprang up in the West along the railway lines. They were needed not only for shoeing horses and repairing wagon wheels but for making and repairing parts for the new farm machinery that was revolutionizing farming on the prairie.

The smith's basic means of working the metals were physical and chemical: air from the bellows, fire from the forge, water for tempering and tools operated by hand. Transformation processes were heating, hammering and tempering (mainly with water). Besides shoeing horses and sometimes trading in them as well, the blacksmith made and repaired all the tools needed for agriculture, cattle rearing, fishing, forestry, heating and transportation. He also fashioned objects with decorative motifs (eg, fleur-de-lys, rattail, leaf, heart, cross, sun, rooster).

Blacksmiths also practised veterinary medicine and, in some areas, doctored humans as well. In rural Québec in the 19th and early 20th centuries, blacksmiths practised a magico-religious medicine based on vaguely scientific notions, combined with folk beliefs and superstitions.

The village smithy was always brimming with activity. It was a meeting place where men held their stag parties, learned to drink, played power and parlour games and discussed politics. The blacksmith indulged in certain popular practices: he was called to re-establish order in the village; he struck the new fire of Holy Saturday in his forge and carried it into the church; he headed the labour group and maintained the fire used in flax crushing; his horses drew the hearse. The blacksmith himself, the theme of tales, legends and songs, held a privileged place in folklore.

The end of the 19th century and the first half of the 20th century saw the development of the country blacksmith's role. At that time, there was an average of one blacksmith for every 100 families, 3-5 blacksmiths per village. The blacksmith enabled the community to save money. Inhabitants paid a fixed price for the year and could have their horses shod as often as they wished. Clients used a barter system and paid in kind with farm or forest products. Sometimes the blacksmith lent money at interest; sometimes he resold grains, vegetables, meats and other produce that he received in payment.

When the colony of New France was established, there was a movement to set up associations similar to those found in France; however, the best that could be done was to form societies of artisans that were more symbolic than corporate in nature. These associations had no control over the quality and conditions of work. The masterpiece required for entry to the trade was never a tradition in Québec; in the early days of the colony, the only requirement was an agreement between the master and his apprentice, drafted by a notary.

In the 19th and 20th centuries, the terms of engagement were less and less official. By the turn of the century, toolmaking machines had already been in use for a long time and complex implements were produced industrially. Gradually, horses were replaced by traction engines for most draught purposes. Blacksmiths became garage mechanics or wandering smiths, shoeing horses at forest work sites or setting up in an area where race or riding horses were found.

In the traditional shop, machine tools had been adopted by the mid-19th century to accelerate production and organize human energy; however, except for a general decline in knowledge of the trade and some diversity in manual tools, the physical nature of the blacksmithing trade changed little up to its final disappearance in the 1950s.

The country blacksmith has left behind him the memory of a strongly individualistic, boasting, swearing, noisy man who associated mostly with other men and worked with percussion tools. The urban smith, working first in a shop and then in industry as a worker, belongs to an era characterized by scientific knowledge. If he persisted in his trade, the city smith had to adapt to the evolving industrial process of working with cast iron and steel.