Brantford, ON, incorporated as a city in 1877, population 97,496 (2016 census), 93,650 (2011 census). The City of Brantford is located on the Grand River, 104 km southwest of Toronto. It is home to several manufacturing industries, educational institutions and heritage sites.

Brantford, ON, incorporated as a city in 1877, population 97,496 (2016 census), 93,650 (2011 census). The City of Brantford is located on the Grand River, 104 km southwest of Toronto. It is home to several manufacturing industries, educational institutions and heritage sites.

Originally inhabited by the Neutral, the surrounding area was part of a large land grant of the British government in 1784 to the Six Nations (see Haldimand Proclamation). With this grant, the British sought to reward the Six Nations’ loyalty during the American War of Independence and compensate them for the loss of their land in the Mohawk Valley area of New York State (see Haudenosaunee). In 1825, the centre of the settlement was named Brant’s Ford after Kanyen’kehà:ka leader Joseph Brant (Thayendanegea).

European settlers began arriving in 1805. The number of colonists grew, and the Six Nations surrendered title to the townsite in 1830. They moved to reserve lands across the river (see also Treaties with Indigenous Peoples in Canada; Reserves in Ontario).

Did you know?
Today, Six Nations of the Grand River is the largest reserve in Canada by population, with almost 13,000 residents as of 2017.


With the arrival of the Buffalo, Brantford and Goderich railway in 1854, Brantford became the distribution centre of a rich agricultural area. In the 20th century, manufacturing flourished and it remains a key sector of the economy.

Brantford is nicknamed Telephone City because it is where Alexander Graham Bell worked on the invention of the telephone at his home. In August 1876, Bell made the first long-distance call to Paris, Ontario, 11 km away.

Brantford’s industries include advanced manufacturing (e.g., automotive and automation), food and beverage manufacturing, and plastics and rubber products. Its other key sectors are film, television, digital media and warehousing and distribution.

The city is also noted for being an educational centre. It is home to Six Nations Polytechnic, campuses of Conestoga College, Westervelt College and Wilfrid Laurier University, and W. Ross Macdonald School for the Blind (opened in 1872).

Brantford is the site of the oldest Protestant church in Ontario, Her Majesty’s Chapel of the Mohawks, built in 1785 with a grant from King George III. Joseph Brant and his son John Brant (Ahyonwaeghs) are buried in the churchyard. 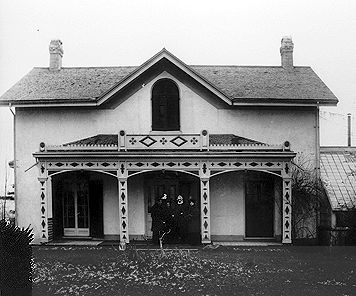 Alexander Bell and party at the home of the telephone, 1906, Brantford, Ontario (courtesy British Library).

The Woodland Cultural Centre offers programming on the history and culture of the Six Nations while Kana:ta Village is a living museum of a 17th-century Haudenosaunee village. 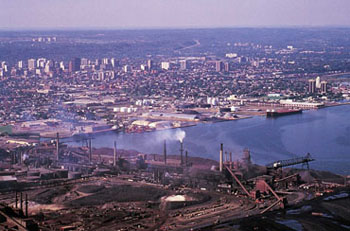