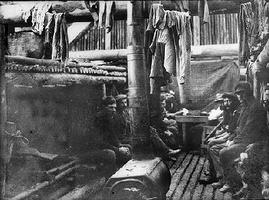 The term "bunkhouse men" is typically applied to some 50 000 workers who constituted a labour pool for the booming Canadian economy in the first 3 decades of the 20th century. They lived in frontier work camps and provided unskilled labour in logging, harvesting, mining and construction. Mainly single and "foreign," they experienced brutal exploitation.

Partly as a result of this, but primarily because jobs moved around, bunkhouse men were highly mobile, tramping within regions and sometimes across the country to find work. They were also often at the forefront of labour radicalism.