Canada at the 1956 Olympic Winter Games

The 1956 Olympic Winter Games were held in Cortina d’Ampezzo, a resort town in the Dolomites, a mountain range in northeast Italy. These Games were the first to be televised and the first to be heavily subsidized by sponsors providing "official" products, such as Fiat automobiles. It was also the first time the Olympic Oath was sworn by a female athlete, alpine skier Giuliana Chenal-Minuzzo, who had won bronze in the women’s downhill event at the 1952 Olympic Winter Games in Oslo.

The Games started on a light note for the Canadians, who engaged in a snowball fight with the German contingent just prior to the opening ceremonies. “While the athletes were waiting to march into the stadium,” reported The Globe and Mail, “the Germans, with shouts of joy, began pelting the Canadians with snowballs. The 50-member Canadian contingent began firing back and the air was filled with missiles until the Canadians entered the arena.”

The 1956 Games marked the debut of a team from the Soviet Union, which finished first in the overall rankings. Soviet athletes became the first non-Scandinavians to win Olympic medals in cross-country skiing and won three of four events in men’s speed skating (there were no women’s speed skating events at the time). They also took the gold medal in ice hockey, ending Canada’s dominance in the sport.

The Canadian team, the Kitchener-Waterloo Dutchmen, breezed through their preliminary round in the hockey competition but lost 4–1 in the medal round to the United States. CBC broadcaster Thom Benson likened the atmosphere after the loss to a funeral. “There was no joy there, no happy words, no jubilation, for last night Canadian amateur hockey suffered a blow to its prestige from which it may never recover.” On 5 February, the Canadians played the Soviet team but lost 2–0 and had to settle for bronze. This began a longstanding complaint about the rules that barred Canadian professionals from Olympic competition but overlooked the Soviet government’s support of its players, who received government jobs and trained together throughout the year.

The 1956 Games also underlined the drawbacks of sending the country’s top amateur team rather than an all-star national team. “Every country with a team in the tournament was represented by a national all-star team except Canada,” said James Dunn, then president of the Canadian Amateur Hockey Association. “My idea would be to make four or five players in the Allan Cup champions as the nucleus and then pack the team with the best players we could find around the country.” Bobby Bauer, who coached the Dutchmen, supported Dunn’s suggestion for a national all-star team, calling it “an absolute necessity.” However, Canada wouldn’t send a national hockey team to the Olympics until the 1964 Winter Games in Innsbruck, Austria. 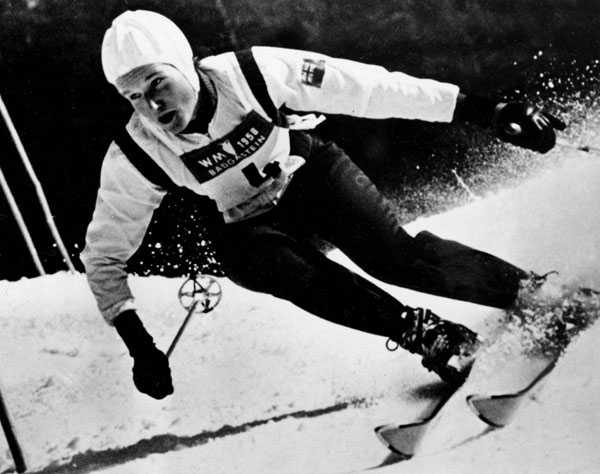 Pretty Lucille [sic] Wheeler gave Canada’s followers something to cheer about today as she won Canada’s first medal for skiing in the history of the Winter Olympics. Canada’s best all-round woman skier, the freckle-faced, red-haired daredevil from St. Jovite, Que., flashed down the mile-long course on the slopes of Mount Tofana in one minute, 46 seconds to finish third in the downhill race. Besides winning a bronze medal and adding four points to the Canadian team total, she lifted some of the gloom hanging over the Canadian Olympic camp as a result of Tuesday night’s 4–1 hockey loss by Kitchener-Waterloo Dutchmen to the United States.

Wheeler also finished sixth in the giant slalom at the 1956 Games. Her 17-year-old teammate, Anne Heggtveit, finished well off the podium in her Olympic debut but would later win gold for Canada at the 1960 Olympic Winter Games in Squaw Valley, California. In men’s alpine skiing, Austrian Toni Sailer won all three events.

The 1956 Cortina Games were the last to hold figure skating competitions outside. American skaters swept the men’s podium and won both gold and silver in the women’s competition. In pairs skating, however, it was a close contest between Canadians Frances Dafoe and Norris Bowden and Austrians Elisabeth Schwartz and Kurt Oppelt. 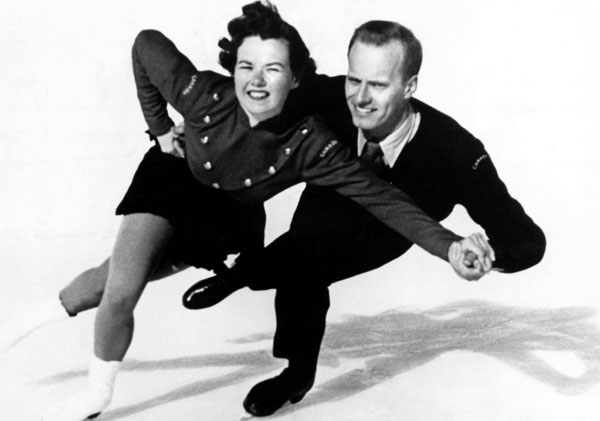 After finishing fifth at the 1952 Olympic Winter Games, Dafoe and Bowden had modified their program, adding new elements such as overhead lifts, and in 1954 they won the world championship. Some of their innovations were criticized by European judges, who maintained that overhead lifts were not permitted. The Canadians narrowly defended their world championship in 1955 against rivals Schwartz and Oppelt, who represented the European classical style. At the 1956 Olympic Winter Games, the Canadians delivered an outstanding program, but a tired Dafoe faltered during a lift. “Miss Dafoe, 26, in Aquamarine and Bowden, 29, in black, yielded nothing to the Austrians in fluidity of skating but had two bad breaks,” reported The Globe and Mail. “At the end, Miss Dafoe faltered on a lift but made a quick recovery, and unfortunately their music ended before they made their last glide and came to a statuesque stop.”

Both the Canadians and Austrians received four first-place votes each; notably, Dafoe and Bowden received their first-place votes from the Canadian, American, British and Swiss judges. However, Schwartz and Oppelt received more second-place votes and thus won the gold medal. “‘I guess we shouldn’t be greedy,’ said Miss Dafoe as she fought back the tears after learning the results. ‘We had our moment of glory. Now it’s theirs.’” (Globe and Mail, 4 February 1956)

The bronze medal in pairs skating again went to Hungarian siblings Mariana and László Nagy, who had finished third in 1952. German skaters Marika Kilius and Franz Ningel finished fourth, much to the displeasure of spectators. The crowd grumbled about judging throughout the competition but became particularly incensed when the scores were announced for 12-year-old Kilius and 19-year-old Ningel, who were very popular. Spectators pelted the judges with oranges and other items, and it took 45 minutes to clear the ice before competition could resume.

Canada at the 2014 Olympic Winter Games

Canada at the 2010 Olympic Winter Games