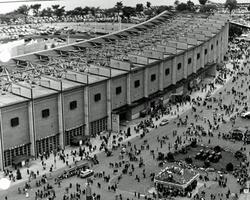 Crowds gathering for a performance at the CNE Grandstand, circa 1950s (courtesy Canadian National Exhibition Archives). 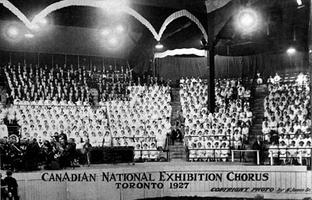 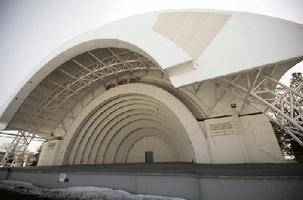 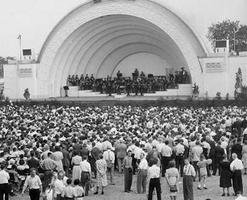 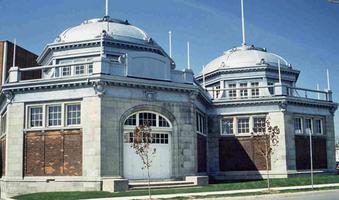 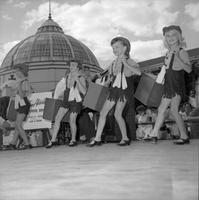 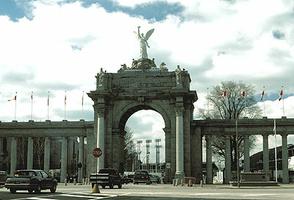 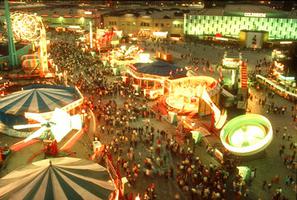 The Canadian National Exhibition, Canada's largest annual exhibition and the fifth largest in North America, is held in Toronto for 18 days in late August. The CNE, or "Ex" as it is popularly called, originated in an agricultural fair that circulated among the towns of Canada West in the 1840s (see AGRICULTURAL EXHIBITIONS). The City of Toronto leased 20 ha of land on the lakefront as a permanent fairground in 1878 and held its own exhibition the following year. For that initial exhibition, which was attended by 100 000 people, admission was 25 cents.

The fair was originally called the Toronto Industrial Exhibition, and all but one of the 23 wooden buildings - the Crystal Palace - were devoted to agriculture. In 1882 the fairgrounds became the first to be lit by electricity, and Torontonian J.J. Wright introduced the electric railway there in 1883. The Crystal Palace was destroyed by fire in 1906 and replaced by the Horticultural Building, an additional imposing structure of brick and stone. The fair was officially renamed the Canadian National Exhibition in 1912.

The CNE continued to grow and to reflect the changes in Canadian society as emphasis shifted from agriculture to industry. By 1912 the fairgrounds covered 141 ha and included one of the finest amusement parks and permanent exhibition facilities in the world. In 1927, The Princes' Gates were opened by HRH Edward, Prince of Wales and his brother Prince George. Designed by the architectural firm of Chapman & Oxley, the Princes' Gates have since come to symbolize the CNE. The original design featured 9 pillars intended to represent the 9 provinces (Newfoundland had yet to join Confederation) flanking a central arch which was topped by a figure, "the Goddess of Winged Victory," created by Charles McKechnie. After a major restoration in 1987, The Princes' Gates were designated as historically significant under the Ontario Heritage Act.

Elaborate grandstand shows were presented, usually on Canadian themes and, during both world wars, on effort, loyalty and victory. Marathon swims across the lake, such as that of Marilyn BELL, who in 1954 became the first person to swim Lake Ontario, and special events such as an exhibition of the first television broadcast in Canada, proved popular. A growing American influence was evident, particularly in the performers selected for the grandstand shows.

By the 1960s the Ex had evolved into a vast consumer market, displaying the latest automobiles, electrical appliances, computers and the like. As popular attention turned to the issue of climate change, the Exhibition Place adopted an official Environmental Plan in 2004 (later named the Exhibition Place GreenSMART program), which saw the introduction of the first permanent wind turbine in the City of Toronto, a natural gas-fired trigeneration project, a geothermal plant, a photovoltaic plant, and energy-efficient LED streetlights. In 2008, the Ex initiated an organic recycling program for food and waste.

The CNE has not been without critics and was cast in a shadow in 1967 by EXPO 67. Nevertheless, approximately 1.3 million people now visit the CNE each year, generating more than $50 million in revenue for the City of Toronto and over $70 million for the Province of Ontario annually.