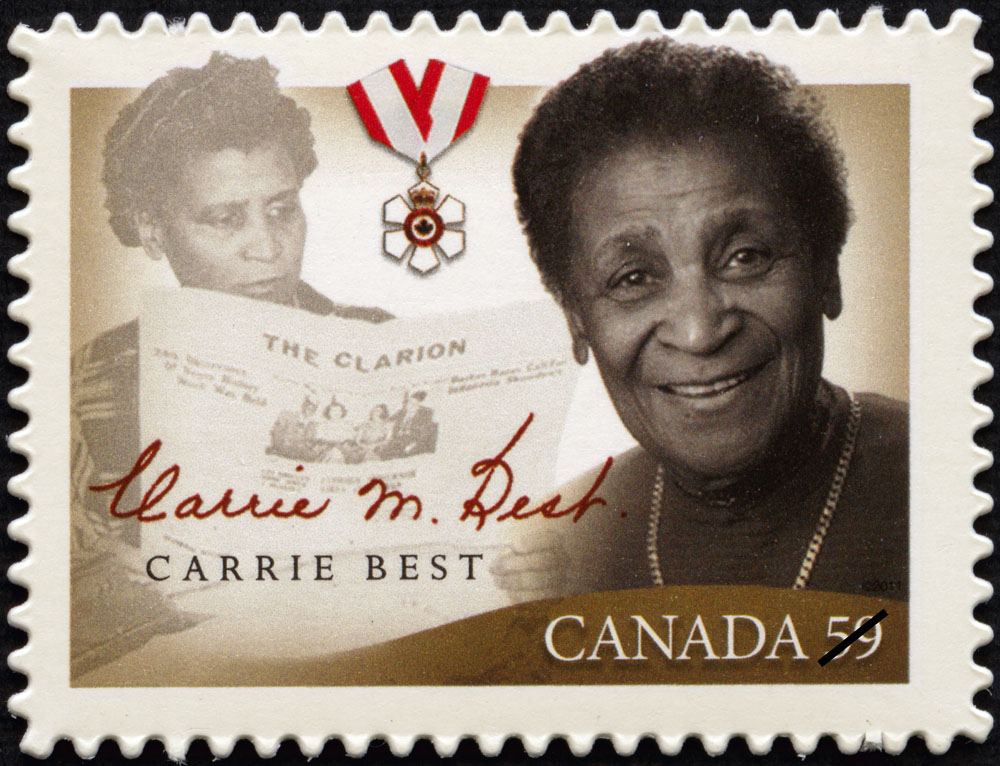 Carrie Best grew up in New Glasgow, Nova Scotia, in an era of racial discrimination. ( See Racial Segregation of Black People in Canada.) Best and her two brothers were encouraged by their parents, James and Georgina (Ashe) Prevoe, to study the history of African-Canadians and be proud of their Black heritage. Although they had not received good schooling themselves, Best’s parents emphasized the importance of education.

An intelligent child, Best wrote her first poems at the age of four and often submitted her opinions in letters to the editors of local newspapers as a teenager. Unhappy with the racial stereotypes portrayed in popular books and local culture, Best sought out the work of African-American poets and historians.

Observing the calm strength and dignity of her mother, Best knew from an early age that she would not accept the restrictions to which Blacks were subjected. Career choices for young women in general were limited, and even fewer options were available for non-white women. Best considered nursing, but no Canadian schools accepted African-Canadians. She wasn’t interested in a teaching career in one of Nova Scotia’s segregated schools. And she refused to be a housekeeper for anyone other than herself.

In December 1941, Carrie Best heard that several high school girls had been removed by force from the Roseland Theatre in New Glasgow. The Black teens had attempted to sit in the “white only” section. Best was outraged. She vigorously argued against the racist policy to the Roseland Theatre’s owner, Norman Mason, in person and by letter, but her argument fell on deaf ears. It was time for Best to go to the movies.

A few days later, the 38-year-old and her son, Calbert, attempted to purchase tickets for the main floor of the theatre. The cashier issued tickets for the balcony, the area reserved for Black patrons. Leaving the tickets on the counter, the mother and son walked into the auditorium. When the assistant manager demanded that they leave, the Bests refused, and the police were called. Roughly hoisted from her seat by the officer, Best and her son were charged with disturbing the peace, convicted and fined. Best could now take legal action against the theatre.

Filing a civil lawsuit that specified racial discrimination, Best claimed damages for assault and battery, damage to her coat and breach of contract. Mason and the Roseland Theatre Company Ltd. claimed that the Bests were trespassers without tickets. The case, heard on 12 May 1942, failed: the proprietor’s right to exclude anyone won out over the bigger issue of racism. The judge not only ignored the discrimination but also ordered Best to pay the defendant’s costs.

In 1939, the Supreme Court of Canada ruled in the Fred Christie Case that private businesses could discriminate on the basis of freedom of commerce. In July 1936, Fred Christie and two friends went to the York Tavern, attached to the Montreal Forum, to have a beer. The staff refused to serve them because Christie was Black. Christie sued and eventually brought his case to the Supreme Court, which ruled that the York Tavern was within its rights to refuse to serve people on the basis of race. The ruling held for decades, even though provincial legislatures and the Canadian Parliament began to outlaw discrimination in the provision of private goods and services after the Second World War. In 1975, Quebec enacted its Charter of Human Rights and Freedoms and finally prevented taverns from discriminating on the basis of race. 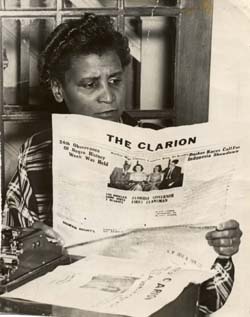 Despite losing the lawsuit against Mason and the Roseland Theatre, Carrie Best was not defeated. The persistent problems of racism and segregation would be publicly addressed by something arguably more powerful than the legal system: Best started a newspaper.

In 1946, she and her son, Calbert, founded The Clarion, one of the first Nova Scotia newspapers owned and published by Black Canadians. Initially a 20- by 25-cm broadsheet, The Clarion reported on sports, news, social activities and other significant events. Incorporated in 1947, the paper placed emphasis on better race relations. For a decade, The Clarion covered many important issues and advocated for Black rights. In 1956, it was renamed The Negro Citizen and began national circulation.

The first Nova Scotia newspaper owned and published by Black Canadians was The Atlantic Advocate (1915–17). The Advocate was a monthly journal “devoted to the interests of coloured people in the Dominion” and was published by Miriam A. DeCosta, Wilfred A. DeCosta and Dr. Clement Courtenay Ligoure, all of whom were West Indian immigrants who had settled in Halifax. Among other issues, the Advocate promoted recruitment in the No. 2 Construction Battalion, which Wilfred DeCosta joined. Dr. Ligoure, a graduate of Queen’s University’s School of Medicine, established a private medical practice in his house in Halifax’s North End, where he treated victims of the 1917 Halifax Explosion. That same year, the Advocate ceased publication.

In 1946, Viola Desmond, a young Black businesswoman from Halifax, found herself in a similar dilemma to the Bests at the Roseland Theatre. She was a beautician, with her own line of products and a prominent beautician training school. While waiting for car repairs in New Glasgow, Desmond decided to go to the movies.

Since she wasn’t a resident of New Glasgow, Desmond was unaware of the town’s unofficial policy of segregation. She went to purchase a ticket and was given a seat in the balcony. She asked to pay the extra money for a seat on the main floor, but the cashier would not change the ticket. Regardless, Desmond settled into a seat on the main floor to watch the film.

The manager approached Desmond and asked her to leave the “white only” section, but Desmond refused. Police arrived and dragged her out, causing injuries to her body and spirit. The businesswoman was not only charged with defrauding the government out of the one-cent tax but also left in a jail cell overnight. Desmond was shocked and angered by the town’s discriminatory policy.

At her trial, Desmond (who did not have legal counsel) was convicted and fined $26. However, she decided to fight and had a strong ally in Best, who prominently featured her story in The Clarion and asked readers to contribute to a fund to help Desmond with court costs. But their efforts failed, as all five judges of the Supreme Court of Nova Scotia rejected the case. Justice would not come until 2010, when Desmond was pardoned — by then, she had been dead for 45 years. 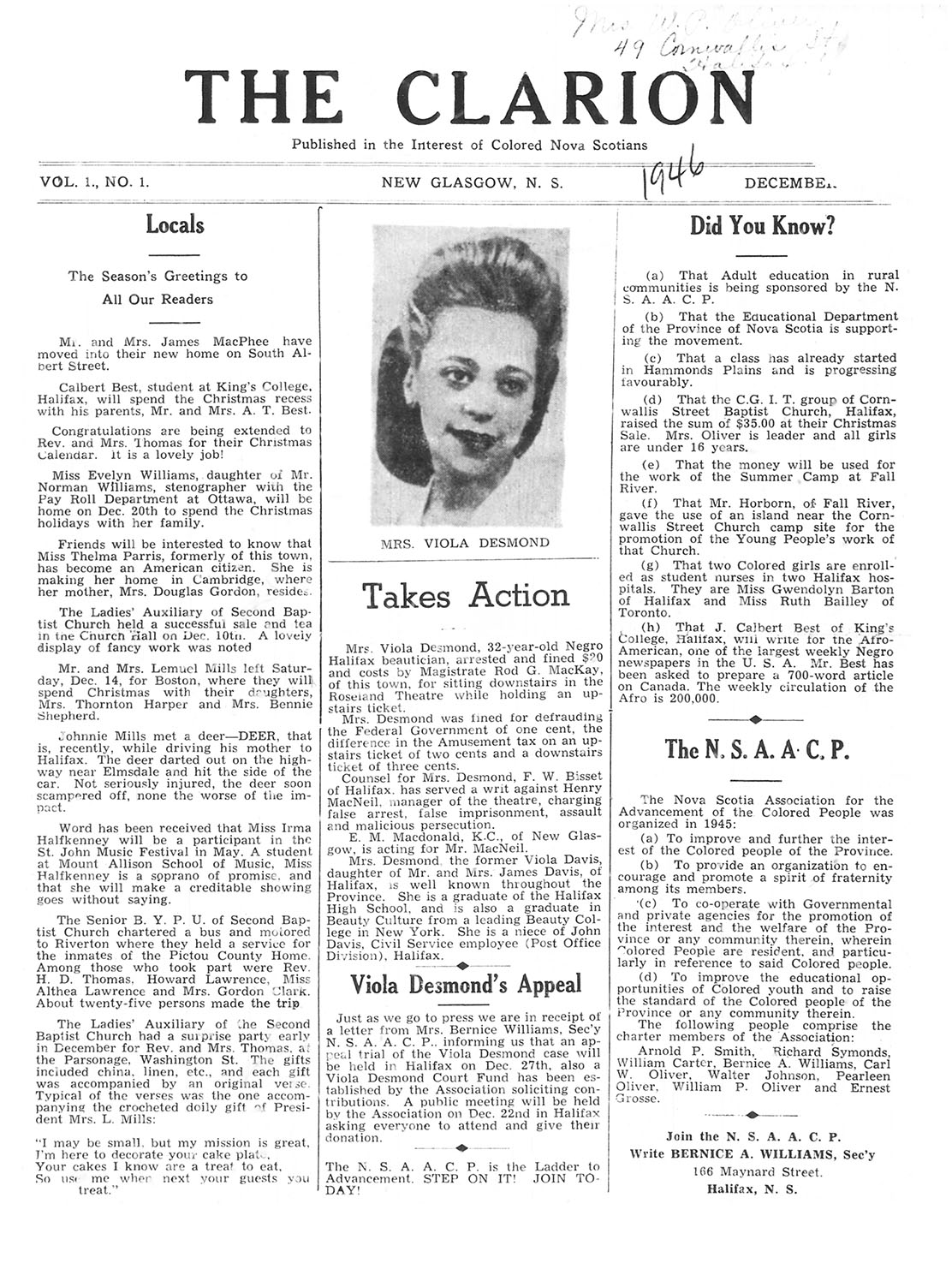 While operating her newspaper, Carrie Best took on another challenge. Unable to find radio programming to her liking, Best yearned for something soothing and inspiring. She solved the problem by broadcasting her own program, The Quiet Corner, which debuted in 1952, with Best at the microphone.

There was no raucous rock ’n’ roll on The Quiet Corner. Between classical and religious music segments, Best entertained fans by reading the works of American poet Henry Wadsworth Longfellow and African American poet Paul Laurence Dunbar. For 12 years, the show filled a need for avid listeners on four radio stations in the Maritimes. 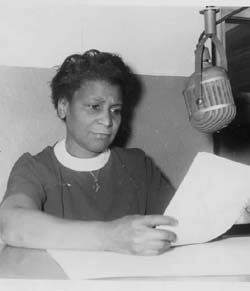 In 1968, the Pictou Advocate hired Carrie Best to write a weekly column entitled “Human Rights,” which ran until 1975. Best used her sharp pen to promote Aboriginal rights, improve living conditions on reserves and advance basic civil rights for all.

However, the Black community still faced great inequality. Among other things, most Black residents of Vale Road and its side streets in New Glasgow were overtaxed so that they would be forced to sell their properties to make way for a new development. Best mounted an in-depth investigation and published her findings in her column; they also became the basis of a report she made to the Nova Scotia Human Rights Commission.

In 1975, the activist founded the Kay Livingstone Visible Minority Women’s Society, an association that provides educational funding for Black women. Two years later, at the age of 74, Best penned her autobiography, That Lonesome Road: The Autobiography of Carrie M. Best.

Carrie Best’s substantial contributions to human rights were recognized provincially and federally. On 18 December 1974, the Governor General named her a Member of the Order of Canada. The honour was given “on behalf of the Negro community in Nova Scotia, in recognition of her zealous work as writer and broadcaster.” Five years later, she was promoted to the rank of Officer of the Order of Canada in recognition of her devotion to the “underprivileged, regardless of race, colour, creed or sex, and particularly her own people of the black community.”

She became Dr. Best in 1975, when she was awarded an honorary doctor of laws (LLD) from St. Francis Xavier University in Antigonish, Nova Scotia. In 1992, the University of King’s College in Halifax awarded her an honorary doctor of civil law (DCL). The university also offers an undergraduate scholarship for African-Canadian and Canadian Aboriginal students — the Dr. Carrie Best Scholarship — in her honour.

Additional awards were bestowed on the human rights advocate, including the Queen Elizabeth Medal (1977), Black Professional Women’s Group Award Certificate (1989) and Award of Excellence in Race Relations from the Minister of State for Multiculturalism (1990); she was also inducted to the Nova Scotia Black Wall of Fame (1980).

On 24 July 2001, Dr. Best died peacefully in her sleep at home. In 2002, she was posthumously awarded the Order of Nova Scotia. Canada Post issued a stamp that featured Best in February 2011. On 17 December 2021, Best was showcased in a Google Doodle created by the guest artist Alexis Eke.