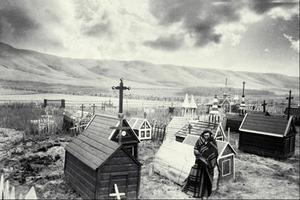 Cemeteries are designated consecrated places in which the dead are deposited. The word comes from the Greek koimeterion or the Latin coemeterium, meaning "to lie down to rest" or "to sleep." This usage alludes to the Christian belief in resurrection, which robbed death and burial of many of their previously perceived terrors; but burial is not only a Christian practice.

In Canada, people of all faiths generally locate their dead in a cemetery, whether in a grave or mausoleum or in an urn stored in a special structure, although some people have their cremated remains strewn in a particular location or stored elsewhere, as in a church's columbarium (ie, a structure with niches to hold urns or boxes containing ashes).

Purpose and Location of Cemeteries

Cemeteries are the accepted places both for the dead and for symbols of remembrance, usually gravemarkers. They also serve a psychologically important role for surviving relatives and friends who can visit gravesides. Cemeteries are often located on hill tops or slopes. Drainage is an important siting factor, but the notion of hill sites as spiritual locations is deeply rooted in the Judeo-Christian tradition.

Cemetery operations in Canada come under provincial jurisdiction. Cemeteries are owned by private corporations, nonprofit trust companies, churches, synagogues and municipalities. Single plots range in price from $350 to over $12,000, with $600-$3500 being common. A percentage of plot prices covers perpetual care. Some cemeteries require - and some people simply like to use - vaults (made of fibreglass, concrete or steel) placed in the ground to receive the coffin. Land values of urban cemeteries rank extremely high, at times having higher per square foot values than prime properties in downtown areas. Some urban cemeteries preserve open spaces and locations for leisure activities (including bird watching).

Viewed historically, there are several types of burial places. The first are undifferentiated sites such as burial sites used for depositing the remains of early explorers and voyageurs along river routes, where it was easier to bury people where they died than to carry the bodies while the long trips continued. Remains of such sites may be invisible today because of decayed wooden markers or flood-damaged rock piles; some remain, as on the Madawaska River in Ontario.

The second are now usually abandoned small family plots that dot the agricultural landscape, ranging in size from 5 to perhaps 20 burials. Early farmers who had difficulty reaching community cemeteries buried family members on their farms. The plots became disused and overgrown as children moved away, when farms were sold, or when a combination of improved roads and better means of transportation brought isolated farms into closer contact with towns with cemeteries.

The third are rural activity foci (churches and small villages) that have cemeteries serving the surrounding rural communities. As happened with most small rural schools and churches, many such small cemeteries are now rarely used or are abandoned.

And the fourth (as for most burials today) are the large population centre cemeteries, in towns and cities. Some have grown from small predecessors, others are new; some are relatively small, others are huge; some are surrounded by urban developments, while others, of recent origin, are on the periphery of built-up areas. Since most old cemeteries were originally on the outskirts of settlements, only to become surrounded by urban functions as the settlements grew, the relative location of cemeteries today thus can be used as an indicator of the timing and changing spatial pattern of urban growth.

Older cemeteries were generally rectangular in form, reflecting a sense of order and "rationality" also found in town and rural surveying schemes. Most post-1920s cemeteries have meandering crescents and driveways similar to new residential subdivisions. Recent design changes reflect a move from "cemeteries" or "burial grounds" to pleasantly landscaped "memorial parks" and "gardens," a trend that may have resulted from secular attitudes and a need to soften the finality of death.

While such religious symbolism may be important to Christians, to most Canadians "garden" cemeteries are simply aesthetically pleasing places for burial. New and some old cemeteries have "gardens of memories" which include mausoleums and columbaria. Small buildings called holding vaults (for storing bodies in coffins until the spring thaw) are seldom used today since excavation technicians - "gravediggers" of old - increasingly use mechanical means to penetrate frozen ground. Until at least the late 19th century, some native peoples solved the winter-freeze problem by using fire to thaw ground for winter burials, or else by placing bodies on platforms or in trees.

High-rise mausoleums (some holding 65 000 remains), as found in Japan, Italy and the US, probably will not be built in Canada in the near future because of tradition and, especially, investment constraints.

Religious preference leads people to be buried in different cemeteries, e.g., Catholic, Jewish, Protestant (of various varieties), interfaith or nondenominational. In the past, people of minority races and of "disapproved" ethnic origins were forced to be buried apart from others. Distributional patterns within cemeteries reflect societal characteristics; socially prominent families often are clustered in higher priced lots.

Stone markers generally indicate graves with, at minimum, names and dates of birth and death inscribed. Markers record past life but also provide a means by which a family's private experience with death is made a public one to be shared. In some instances, markers may indicate more about the surviving families' wealth and self-perceived status than about the departed. Some large urban cemetery monuments are extremely grand. Most Canadians shy away from elaborate markers. Former Prime Minister Lester B. Pearson's grave in Wakefield, Québec, is impressive for its simplicity. Doukhobors do not glorify their dead by erecting monuments.

Military gravestones are generally identical in their plain design, with symbols designating each departed's faith and, sometimes, the insignia of an armed service. Some 15 000 such stones appear in cemeteries across Canada. More than 100 000 Canadian dead from World Wars I and II lie in cemeteries in 75 countries. Canada is one of 6 partners in the Commonwealth War Graves Commission which cares for Commonwealth cemeteries in 145 countries.

Gravestone styles have changed. In the 18th century stones were severely simple, with an acceptance of death imprinted on them (e.g., an hourglass with the sands of time run out, the grim reaper's scythe and bare skulls) and factual (and oftentimes humorous) epitaphs.

A softening of attitudes towards death developed over the next century, with skulls being transformed into angels' heads - cherubim with gentle smiles - and with sentimental epitaphs. Victorian grandeur and fussiness (notably 1880s to early 1900s) gave way to a more severe modern style. Epitaphs were commonly inscribed on stones in the past, but today more than "in memoriam" is rare.

Markers may have engraved symbols, including the open Bible, symbolizing the Word through which one gains salvation and revelation; urns, symbolic of the body's death, from which rises the soul to heaven; a dove, for the Holy Spirit, peace and Christian constancy and devotion; the Star of David, symbolizing Jewish faith; flowers, symbolizing both the beauty and the brevity of life; grapevines, symbolizing Christ as "the true vine"; carved portraits or photographs embedded in the stone; symbols of fraternal societies; or something of significance to the departed (a gun, a deer, a car).

Words on grave markers have ranged from statements of fact (birth and death dates, where the person was born or died, perhaps cause of death, names of a spouse and children) to boasts about achievements or activities. A religious reference or some poetry (occasionally suggestive of having been written by a group during a wake) may be cited.

Cemeteries silently record the past. They document local history and biography, making them important for tracing genealogy. Other facts can be gained and inferences made about settlement patterns and the history of surrounding communities, including ethnic origins, disease and death relationships, attitudes (from epitaphs) about death, societal standing (from relative locations and, sometimes, style of markers) and gravestone styles as reflections of culture change. Questions posed by reading cemetery landscapes may have to be fully explored using other sources, such as newspapers.