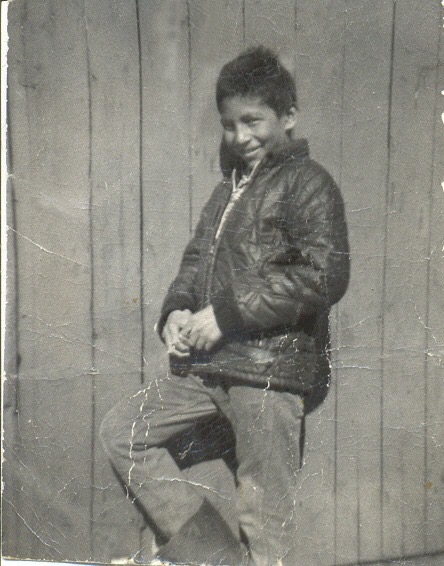 Wenjack grew up at Ogoki Post, on the Marten Falls Reserve, with his parents, sisters and two dogs. Ogoki Post did not have a day school. At age nine, Wenjack and three of his sisters were sent to Cecilia Jeffrey Indian Residential School, more than 600 km away, where he was given the name “Charlie.”

Located near Kenora, Ontario, the Cecilia Jeffrey School was run by the Women’s Missionary Society of the Presbyterian Church in Canada, and paid for by the federal government. During the 1960s, 150 students lived at Cecilia Jeffrey and attended classes at schools in Kenora.

Wenjack started residential school at Cecilia Jeffrey when he was nine years old and was placed in grade one. After two years, he was put in remedial classes with special instruction in English and arithmetic.

The principal of the Kenora school remembered Wenjack as a boy with a good sense of humour, particularly adept at noticing wordplay. However, he died before learning how to read English.

On 16 October 1966, Wenjack and two of his friends escaped from the Cecilia Jeffrey School during their afternoon time on the playground. They were wearing only light cotton clothes when they ran away. This was Wenjack’s first, — and last, — attempt at escape.

Children ran away frequently from residential schools. At Cecilia Jeffrey, principal Colin Wasacase, a member of the Cree Nation, instituted strapping as punishment for students who ran away. The day that Wenjack and his friends left, nine other children also escaped from Cecilia Jeffrey. Running away was dangerous; children could lose limbs to frostbite or accident. Many, like Wenjack, died.

Children ran away from residential schools for many reasons. Wenjack told his friends that he wanted to see his father. At the inquest into his death, the jury and journalist Ian Adams concluded that Wenjack had run away because he was lonely. Wenjack’s sister, Pearl (Wenjack) Achneepineskum believes that he may have run away because he was sexually assaulted. Many students were sexually and physically abused at residential schools.

In his escape, Wenjack followed his two friends to the cabin of their uncle, Charles Kelly, near Redditt, Ontario. On the first day of their escape, they walked for over eight hours before stopping at a friendly home for the night. After they arrived at the cabin, Kelly took his nephews to his trapline. Wenjack walked the nearly 5 km to meet them, then set out alone to find his father. Kelly advised Wenjack to follow the railroad tracks and to ask railway workers for food. Wenjack carried only a glass jar with a few matches.

Wenjack survived for the next 36 hours. The weather turned harsh, with snow squalls and freezing rain. The temperature went down to between -1 and -7°C. With only a cotton windbreaker and no food, Wenjack covered 19 km on foot. When he was found, his body was bruised from repeated falls.

According to a letter written by Wasacase to his supervisor in November of 1966, Wenjack’s mother had requested that his body be returned home. After first refusing the expense, the Department of Indian Affairs made the travel arrangements. By train, Wasacase, several of Wenjack’s sisters and his mother accompanied Wenjack’s body to Nakina, then by plane to Ogoki Post.

The same letter addressed to Wasacase’s supervisor in 1966 claims that Wenjack’s father did not know that his son had died. Wasacase, the police and Indian Affairs had attempted unsuccessfully to contact him. Wenjack’s father had only received an earlier letter that said his children were doing well at Cecilia Jeffrey. The Wenjack family later learned the details of the inquest through CBC radio and newspaper reports. They were not allowed to attend the inquest.

Wenjack was buried on 27 October 1966. According to Wasacase, Wenjack’s family examined his body at the graveside. Seeing autopsy marks, Wenjack’s father feared that he had been stabbed. He had the Ontario Provincial Police confirm how Wenjack had died before he allowed his son to be interred.

A coroner’s inquest into Wenjack’s death was held 17 November 1966. The coroner and Crown attorney questioned witnesses, including the boys who had been with Wenjack during his escape and the men with whom they had stayed.

The jury was composed of five local residents, none of whom were Indigenous. Their report recognized that “The Indian education system causes tremendous emotional and adjustment problems for these children.” They recommended that “a study be made of the present Indian education and philosophy. Is it right?” This prompted ethical and moral questioning of the culturally oppressive and abusive environments in the residential schools.

Journalist Ian Adams brought Wenjack’s story to national attention with his article, “The Lonely Death of Charlie Wenjack,” published by Maclean’s in February 1967.

Wenjack has become a symbol of resistance to the power of colonization in Canada. In 1972, Indigenous students and members of Trent University’s Native Studies department lobbied for the university to name its newly built college after Wenjack. Ultimately, a theatre in the college was named “Wenjack Theatre.”


In October 2016, Tragically Hip frontman Gord Downie released The Secret Path, a multimedia project that includes an album, graphic novel (illustrations by Jeff Lamire) and animated film (aired by the CBC on 23 October) based on Wenjack’s story. Proceeds from the project will be donated to The Gord Downie Secret Path Fund for Truth and Reconciliation through the National Centre for Truth and Reconciliation at the University of Manitoba.

Wenjack’s story, as well as the many similarly tragic stories of residential school students, led to eventual legislative reforms and class action lawsuits, including the Indian Residential Schools Settlement Agreement and the Truth and Reconciliation Commission.