Discussions in Charlottetown, the capital of Prince Edward Island, were held in the legislative council chamber of Province House. The schedule was from Thursday, 1 September 1864, until Wednesday, 7 September, with a break on Sunday. Throughout the week, much feasting accompanied the meeting. The local specialty, lobster suppers, were a highlight. Hospitality enabled the participants to get to know one another.

On Thursday, 8 September — a holiday — a grand ball was hosted for the delegates at Province House. The council chamber was turned into a reception room. The library served as a bar and the legislative assembly chamber as a dance floor. The festivities carried on late into the night and early morning. Supper was served at 1:00 a.m. Speeches followed until 5 a.m. Delegates then boarded the SS Queen Victoria for the journey to Halifax.

Further meetings were held in Halifax, Saint John and Fredericton. They concluded on 16 September. The discussions were formally concluded on 3 November 1864 in Toronto, while the delegates were touring central Canada following the Quebec Conference.

In 1862, the Province of Canada had refused to pay part of the costs for the Intercolonial Railway. It ran from Halifax to Quebec City. That sparked discussions among the Maritime colonies about merging into a single unit. They hoped this would give them political strength and help attract financial investment. Prince Edward Islanders welcomed any project that might buy out landlords who owned large swaths of island property but lived outside the colony. However, overall support for Maritime union did not run deep.

The Province of Canada’s interest in creating a federal union with the Maritimes was mainly due to external threats. A huge army was formed in the United States during the American Civil War. Meanwhile, Britain wanted to reduce its financial and military obligations to its North American colonies. These factors led to fears in Canada of American annexation. (See also: Annexation Association.) The province had also had a series of weak and unstable governments. This fueled the demands for change and the pressure for a new political structure.

When Canadian political leaders learned through Samuel Tilley of the upcoming conference in Charlottetown, they seized on the chance to attend. They sent a delegation that hadn’t been invited by the Maritime organizers but was welcomed anyway. 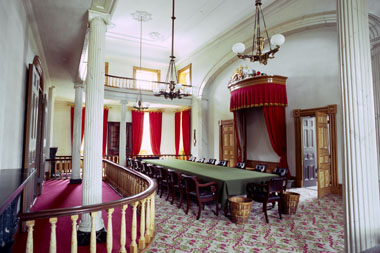 Confederation Chamber, within Province House, was the site of the Charlottetown Conference setting Confederation into motion.

The three Maritime provinces each named five delegates to Charlottetown. Each delegation included members of the government and the opposition.

The Fathers of Confederation weren’t a bunch of old men. New Brunswick’s Chandler was 64, but the others ranged from 35 to 55. Tupper was 43 and Tilley 46. They were middle-aged politicians who hoped to someday operate the institutions they were creating. The youngest, PEI’s Andrew Macdonald, stands out in the delegates’ group photograph taken under the portico of Charlottetown’s Government House. Leaning against a column, he jauntily raises his stovepipe hat to shield his eyes from the sunlight.

There were some notable omissions from the all-male group of Maritime delegates. No delegate spoke for the region’s sizeable Irish communities. Andrew Macdonald was the only Catholic, and he came from a privileged Highland Scots background. Although the proposed united province was unofficially called Acadia, there were no francophone representatives. Meanwhile, Indigenous people and Black Canadians were excluded from public life.

The delegates of the provinces meet at Charlottetown to consider the union of the British North American colonies.

Some accounts of the Charlottetown Conference imply that the small-town Maritime politicians were dazzled by the Canadians into accepting a new and wider vision of nationhood. In fact, Confederation with the Province of Canada had been widely debated for many years in the Maritimes. However, it was mainly seen as a long-term development.

Nova Scotians Tupper and McCully had supported uniting all the provinces. Gray of New Brunswick had called for a federal union as far back as 1849. Tilley was guardedly in favour. Gray of PEI claimed to have dreamed since his youth of a great British North American nation. Coles even outlined a Confederation scheme. However, his insistence that the capital should be in Charlottetown was unrealistic.

As for their experience and political sophistication, Chandler, Tilley and Steeves of New Brunswick, plus the Nova Scotians Archibald and McCully, had participated in negotiating the Intercolonial Railway with Canada. They were well equipped to assess Canadian proposals. Joseph Howe, the most celebrated Nova Scotian Liberal, was invited to take part by Tupper. However, he was absent on an official mission. He expected Charlottetown to produce a scheme for Maritime Union and promised to co-operate in its adoption. However, he soon rejected the wider scheme of Confederation. (See also Confederation’s Opponents.)

Eight of the 12 members of the Province of Canada’s Great Coalition travelled to Charlottetown, a sign that they meant business. Several were political heavyweights. Legal knowledge and political smarts made Conservative John A. Macdonald a key figure in the proceedings. George Brown, owner of the Globe newspaper, was the principal Reformer (Liberal) in the Coalition. He spoke for Canada West (formerly Upper Canada; present-day Ontario).

Canada East (formerly Lower Canada; present-day Quebec) was represented by the financial expert Alexander Galt, and by the Irish Catholic orator and writer Thomas D'Arcy McGee. The sole francophones, George-Étienne Cartier and Hector-Louis Langevin, were both fluent in English. (It is unlikely that French was spoken at the conference.) The remaining Canadians were Reformer William McDougall and Conservative Alexander Campbell.

The Canadians were mostly in their 40s. The youngest, Langevin, was just 38. The oldest, Cartier, turned 50 during the Conference. McGee was the only one who knew the Maritimes well. He had liaised with Samuel Tilley to secure Canadian attendance at Charlottetown. The Canadians also brought two senior bureaucrats with them, plus a shorthand writer. This suggested that they hoped to hammer out a detailed scheme for Confederation at the conference.


Meetings Begin in a Muddle

The arrival of the Nova Scotian and New Brunswick delegates on 31 August revealed the administrative shortcomings of their PEI hosts. No hotel accommodation had been reserved. Little was available because Charlottetown was packed with visitors attending a circus. The contrast between Maritime muddle and Canadian efficiency was underlined by the arrival next morning of the Queen Victoria, the official Province of Canada steamship. It functioned as a floating hotel for those Canadians who could not locate beds on land. PEI minister W.H. Pope was rowed out to greet them in a fishing boat, sitting on a barrel of flour. Later, the Canadians were rowed ashore by smartly uniformed crewmen.

On the afternoon of 1 September and the following morning, the Maritime delegates assembled at Province House. They elected Premier Gray as chairman and examined the priorities of the three delegations. The Nova Scotian legislature had authorized consideration of a plan for Maritime Union. However, the New Brunswick and PEI delegations were mandated only to engage in general discussion. The Conference had encountered a problem of divided aims at the outset.

There was a general session to welcome the Canadians on the afternoon of Friday 2 September. After further talk and speeches the next morning, the Canadian visitors hosted a champagne luncheon on board the Queen Victoria. (See The Charlottetown Conference of 1864: The Persuasive Power of Champagne.) Someone quoted words from the Anglican marriage ceremony: if anyone knew any reason why the provinces should not be united in matrimony, let him speak now or forever hold his peace. General laughter confirmed for some that the marriage banns of a new Canada had been proclaimed and union would proceed.

In fact, the Maritime delegations had not yet agreed to Confederation. Still, the moment was interpreted by Canadian delegate George Brown as proof that they would. As historian J.M.S. Careless wrote in his biography, Brown of the Globe: “There, in the chief stateroom of the Queen Victoria, amid the wineglasses and cigar smoke, 23 men had warmly agreed to found a new nation. Other states might have a more dramatic start — but few, surely, a more enjoyable one.”

All-day sessions were held the following Monday and Tuesday. By then, the distinction between the official Maritime and the unofficial Canadian contingents was practically abandoned. 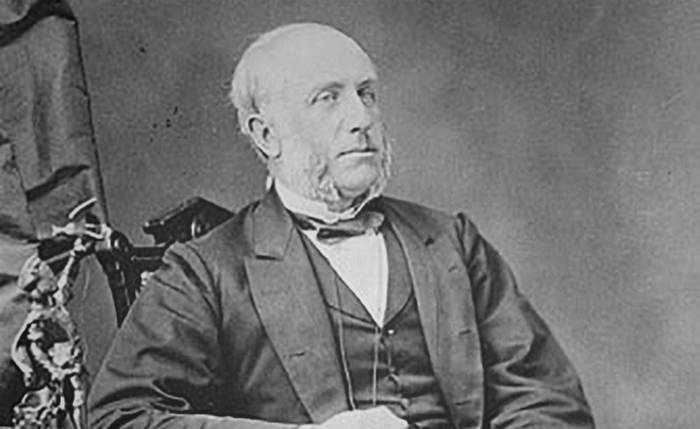 The precise order of the Canadian contributions remains unclear. However, it seems that Cartier spoke first. He was determined that Confederation should guarantee French Canadian autonomy. He reassured the Maritimers that he also wanted them to retain local control over vital regional issues. (See also Distribution of Powers.) Brown, who had been the driving force for Confederation in the Canadian legislature, perhaps spoke twice. He also stressed that Canada West wished to run its own affairs. He probably emphasized that if Confederation could not be reached within a year, the Great Coalition would restructure the Province of Canada into a local, two-headed federation. Maritime delegates faced a genteel Canadian ultimatum: If they favoured Confederation in principle, it was now or never.

John A. Macdonald balanced the emphasis on provincial rights with a strong centralist message. Particularly important was Galt’s impressive presentation on 3 September. He outlined how the provinces would be financed under Confederation. Galt defended Canada’s high public debt, which alarmed the frugal Maritimers. Galt argued that because of Canada’s higher population, its per capita debt was smaller than that of New Brunswick.

In 1862–63, the Province of Canada had rejected a scheme to pay five-twelfths the cost of the Intercolonial Railway. Now, however, construction of the line would be guaranteed under Confederation. Five-sixths of the cost, double the previous share, would be borne by the more prosperous Canadian taxpayers. It was an attractive offer.

Tupper was reluctant to abandon Maritime Union altogether. However, Tilley believed the Maritimes would secure better terms from the Canadians if they entered Confederation as separate provinces. The New Brunswickers were particularly troubled by the “seat-of-government” issue. Where would the capital of the united province be located? If Halifax claimed the prize, Maritime Union looked like Greater Nova Scotia. Tilley was prepared to consider regional union if the larger scheme failed. He argued that the three Maritime colonies could easily be merged into one single province after Confederation. His fellow delegates generally agreed and persuaded Tupper not to press his motion to a vote.

After a private discussion on 7 September, the Maritime delegates gave the Canadians their answer. They were unanimous in supporting a federation of all the provinces as long as the terms were satisfactory.

The consensus extended beyond the general principle of Confederation. Several major issues were later regarded at the Quebec Conference to have been unofficially agreed upon at Charlottetown. The Intercolonial Railway was central to the deal. The Maritimers would accept Confederation if they got the railway. The Canadians would only build it as part of a political union. Also agreed upon was the principle of sectional equality — an equal number of seats for each region — in the future upper house (Senate) of the new government. (See also: Rep by Pop.) The Charlottetown arithmetic assumed 20 Senate members would come from the Maritimes as a whole, and 20 each from the future Ontario and Quebec.

It was agreed that another conference would be held in Quebec City in October 1864 to work out the finer points of Confederation.