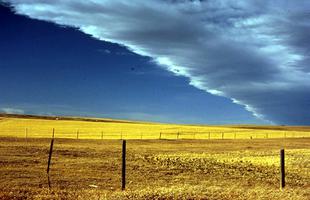 Chinook arch in the sky of southern Alberta. The arch is created as clean air pushes the cloud cover westward (courtesy Bernshaw Photography).

The wind blows from west (left) to east (right), releasing moisture and picking up heat as it crosses the mountains (artwork by Steven Fick).
PreviousNext

Chinook, warm, dry, gusty, westerly WIND that blows down the Rocky Mountains into the mountains' eastern slopes and the western prairies. The chinook, a native word meaning "snow eater," belongs to a family of winds experienced in many parts of the world where long mountain chains lie more or less at right angles to the prevailing wind. Examples include the foehn in Europe, the zonda in Argentina and the berg in South Africa.

In Canada, the chinook belt lies almost exclusively within southern and central Alberta. The wind occurs in every season, but it is more distinctive and numerous in the winter, when the unseasonable warming it brings differentiates it from the normal cold winter weather. In southwestern Alberta, one in 3 winter days is a chinook day; its frequency drops to one in 5 in the northeast. The maximum daily temperature anomaly associated with the wind ranges from +13°C in the northwest to +25°C in the southeast. The temperature rise at the onset of the event is abrupt and steep; an increase of 27°C in 2 minutes has been observed.

The warmth of the chinook is derived primarily from 2 nonmutually exclusive sources. Firstly, the replacement of arctic air (the mean temperature at Calgary's elevation is -24°C) by maritime air (-2°C) improves surface temperatures. Secondly, if the downslope flow occurs following a loss of moisture through precipitation on the windward side of the mountain, the heat used to change the water into vapour (latent heat) is returned to the air parcel and warms it. The downslope flow leeward of the mountain warms the wind further, reducing its relative humidity sometimes down to 25% or less. Wind speed ranges from 16 km/h to 60 km/h, gusting to 100 km/h.

The chinook melts snow, dries soil, desiccates vegetation and is a factor in soil erosion. Most people appreciate the chinook because it is a pleasant break from the frigid winter temperatures characteristic of the region. However, a significant minority complain of discomforts ranging from headaches and earaches to depression and attempted suicide.