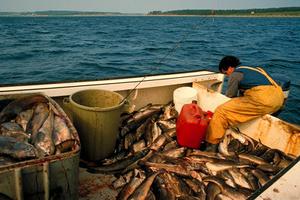 Spawning usually occurs during cool months, but exact time depends on water temperature and location of spawning grounds. On the Grand Banks (specifically, the Grand Bank proper), spawning occurs Apr-Aug, and on Nantucket Shoals, Oct-Feb. Atlantic cod are prolific: a 100 cm long female may produce about 5 million buoyant eggs. Hatching time depends on water temperature, and may take several weeks. Young cod grow at different rates in different areas: the colder the temperature, the slower the rate of growth. Young cod eat plankton and, as they mature, bottom creatures, but adults are voracious and feed mainly on other fishes (eg, capelin, herring), crustaceans and squids.

Atlantic cod, one of the world's leading food fishes, has been fished on the Grand Banks for centuries. Because of a number of factors, including overfishing and adverse ocean conditions, in 1992 the federal government closed part of the fishery and reduced quotas in other parts within Canada's 200 nautical mile (371 km) zone. Despite closures and strict management the fishery has yet to recover.