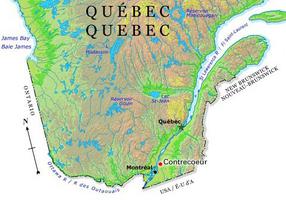 Contrecoeur, Québec, municipality, pop 5222 (2001c), 5331 (1996c), 5501 (1991c), pop 5553 (1986c), area 61.19 km2, is part of the Montérègie region famous for its sugaring-off time and its apple orchards. More specifically, it is part of the MRC de Lajemmerais, which also includes the municipalities of Boucherville, Varennes and Sainte-Julie. Contrecoeur is 45 km from Montréal and spans 24 km along the banks of the St Lawrence River. A migratory bird sanctuary is located on the islands visible from Contrecoeur.

Present Day
Contrecoeur's accessibility via its highways, railways and seaways has made it a very attractive site for industry. At the turn of the century, the economy revolved around the numerous shoe factories. The 1960s ushered in steelworks manufacturing industries. SIDBEC-DOSCO (ISPAT) INC and STELCO INC are the largest employers in Contrecoeur.

Historic Sites
The Maison Lenoblet du Plessis (1794), situated on Cartier-Richard Park, is named after Alexis-Carme Lenoblet du Plessis, a cousin of a great grandfather of premier Maurice Duplessis. It was purchased by the municipality in 1978 and was opened to the public the following year. In 1981, it was declared a historic monument.