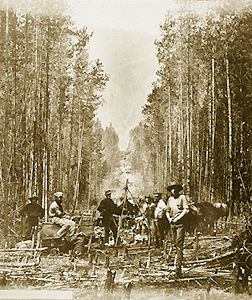 Cutting on the 49th parallel, on the right bank of the Moyie River, looking west, 1860 (courtesy North American Boundary Commission).

The Convention of 1818 was a treaty between the United States and Britain that set the 49th parallel of latitude as the boundary between British North America and the US across the West. This remains the boundary today between the two nations.

The Convention of 1818 was signed on 20 October 1818. It described the boundary between British North America and the US as a line from the farthest northwest point of Lake of the Woods (at what is now the provincial border between Ontario and Manitoba) "north or south, as the case may be" to the 49th parallel and then west along the parallel to the "Stony [Rocky] Mountains."

The area west of the Rocky Mountains was to be "free and open" to either Britain or the U.S. for the next 10 years. In 1827, this period was indefinitely extended, but it was ultimately terminated by the 1846 Oregon Treaty – which extended the 49th parallel boundary west to the Strait of Georgia on the Pacific coast.

The Convention included six articles, which dealt with a variety of commercial issues and boundary matters, in addition the 49th parallel:

Along with the 1817 Rush-Bagot Pact, the Convention of 1818 serves as an example of improved relations between the United States and Britain following the War of 1812. The treaty solved a boundary dispute that emerged from the 1783 Treaty of Paris, which ended the American Revolutionary War. The Convention (and the Rush-Bagot Pact) did not completely settle longstanding disputes between the US and Britain, but marked important turning points in their relationship.

History of the Canada-US Border in the West