In Conversation with Anne Heggtveit

On 25 June 2014, author Jeremy Freeborn interviewed Anne Heggtveit of Ottawa, ON, at Canada’s Sports Hall of Fame in Calgary for The Canadian Encyclopedia. Heggtveit, who won a gold medal in women’s slalom at the 1960 Olympic Winter Games in Squaw Valley, was the first Canadian skier to win a gold medal in alpine skiing at the Olympic Winter Games.

JF: Tell me about the first time you became involved in alpine skiing.

AH: I guess I’d have to say when I started to walk around the backyard on skis when I was three years old. As far as competition was concerned, I was six when I went into my first race. It was a downhill race.

JF: What challenges did you face as a woman competing in alpine skiing?

AH: Well, I may have actually had an advantage being a woman because I was not pressured to go to university as my brother was. It may have been a help. It was an interesting way to look at it.

JF: I understand you had several injuries in the 1950s. How did you overcome these and why did you decide to continue alpine skiing?

AH: My first bad injury was at age 16. I had already competed at the World Championships the winter before breaking my leg. From age eight on, I had always had the goal of winning Canada’s first Olympic gold medal in skiing. That was a driving force in my rehabilitation and desire to continue, which I did. The next year (1956) I was on the Olympic team in Cortina d’Ampezzo, although I was really just recovering. I didn’t do well, but by the end of the winter I was doing much better.

JF: It has been well documented that your Canadian teammate Lucile Wheeler believed she needed to ski regularly in Europe in order to be competitive with the elite skiers in the world. Were you of a similar mindset or did you train a lot in North America?

AH: I was the beneficiary of Lucile. She proved that training in Europe would work. She paid her own way in 1957 to race in Europe with the top skiers in the world. I stayed at home and finished high school that year. Then we both competed at the 1958 World Championship [in Bad Gastein, Austria], and by that time I was back placing in the top ten when she won her two gold medals. So as a result of her blazing the trail, in 1959 (an off year), Canada sent a team to Europe to train. They sent a bunch of young committed girls like me. It was an absolutely crucial experience that helped me win an Olympic medal in 1960.

JF: How did you feel to be the very first Canadian skier to win a gold medal at an Olympic Winter Games?

AH: I was ecstatic because first of all that had been my goal — to win that first one. It was hard to believe initially. Then, as a bonus of course, I won the gold medal in the combined [best overall time in the slalom, giant slalom and downhill] as well as the slalom, giving me a second gold medal in the FIS [Federation Internationale de Ski] world championship. It was a great culmination to a career and I was quite happy to retire at that stage of the game.

AH: It was a strong connection in that it was an opportunity really to meet people like Barbara Wagner and Robert Paul (the first Canadian Olympic gold medalists in pairs figure skating). Barb and I communicated a lot. It was a chance to see some of the other athletes and get to know them. It was a good Olympic Games to do that because it was a very small venue; the press were in Reno and we were in Squaw Valley. So, it was a good atmosphere.

JF: How meaningful was it for you to see other Canadian female skiers, such as Nancy Greene, Karen Percy and Kerrin Lee-Gartner, succeed internationally after your great success?

AH: It was very meaningful. And you know what was really interesting, if you look and do a timeline of our nine winners, we all overlapped each other. I was just talking to Kerrin Lee-Gartner about that, with Melanie Turgeon being the last world champion in 2003 and Lucile Wheeler being the first in 1958. We all overlapped. Lucile and I raced, then it was Nancy (Greene) and I, then it was Betsy Clifford (world champion in 1970) and Nancy, and so on. It really kind of shows that having a chance to ski with somebody and emulate them, helps.

JF: In the last 15 years, Canadian women have been more successful in freestyle skiing than alpine skiing. What do you think are some of the reasons for this?

AH: I don’t know, to tell you the truth. It is great to see [the success of freestyle skiers]. I would like to see some more women alpine racers right now at this stage of the game. Maybe it is because some of these new and incredible freestyle sports are attracting them, like slopestyle and moguls. I personally would not like to [compete] in any of them, but young women seem to be [attracted to them].

JF: For those young Canadian alpine skiers who have international aspirations, what would you tell them?

AH: I would tell them to aim for the top. Go for the gold. It takes determination and hard work. But you can do it. If that is really what you want to do and you’ve got the talent, you can get there with hard work. 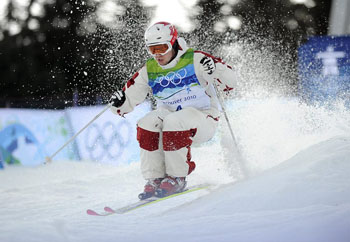 In Conversation with Alexandre Bilodeau