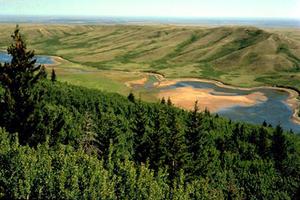 Cypress Hills, located in southeastern Alberta and southwestern Saskatchewan, was one of the few areas in Canada not completely ice-covered during the Wisconsin glaciation (photo by Brian Milne/Masterfile).\r\n 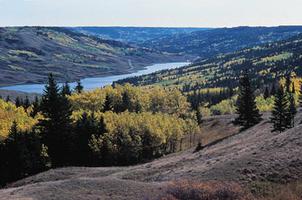 The Cypress Hills, covering about 2500 km2, are situated in southeastern Alberta and southwestern Saskatchewan. With a maximum elevation of over 1460 m, they rise 600 m above the surrounding prairies, forming the highest point in mainland Canada between the Rocky Mountains and Labrador.

There is archaeological evidence that the Cypress Hills had human habitation 7000 years ago. Plains Native people wintered here, for the hills offered protection from the prairie winter winds and game was abundant. The hills were also important for spiritual quests and for the lodgepole pine that was used for the poles of their lodges and TRAVOIS. The hills' name probably derives from an early French Canadian explorers' term, montagne de cyprès, used to describe their pine-covered character. The word cyprès (cypress) was widely, though erroneously, used in reference to Canadian pine forests. The area is identified as the Cypress Hills on the PALLISER map of 1857-60. It was a centre of whisky trade in the late 1860s, and in 1873 a gang of American wolf hunters massacred some Assiniboine there. The incident spurred Prime Minister John A. MACDONALD's government to establish quick passage of the recently introduced bill to create the NORTH-WEST MOUNTED POLICE. FORT WALSH was built in 1875 near the site of the massacre.

Ranching became important in the area after the Canadian Pacific Railway arrived at MAPLE CREEK in 1883. Beginning in 1906, part of the Cypress Hills was protected as a federal forest reserve. RESOURCE RIGHTS were transferred to the provinces in 1930. The Alberta portion remained a forest reserve (provincial) until 1951, when it was designated as a provincial park. Most of the Saskatchewan portion was designated as a provincial park in 1931. In 1989 CYPRESS HILLS INTERPROVINCIAL PARK became Canada's first and only interprovincial park.

The hills form a rolling plateaulike upland, rising sharply to the north and in the south gradually dropping to meet the plains. Fed by numerous springs that emerge along the hillsides, the slopes are covered by a mixed forest of lodgepole pine, white spruce, balsam poplar and aspen. The quick-draining open plateau supports fescue grasslands and shrubs. The area is a humid island in the semi-arid prairies, with many varieties of plants and animals representative of the ROCKY MOUNTAINS, over 200 km to the west. Over 230 bird species have been sighted here.

Capped by a layer of stream-laid gravels up to 100 m thick (the Oligocene-aged Cypress Hills formation) derived from the Rockies, the Cypress Hills are an erosional remnant of a once extensive higher-level plains surface that was largely removed by stream action during later Tertiary and early Quaternary times (seeGEOLOGICAL HISTORY).

The hills were high enough to have been one of the few areas in Canada not completely ice-covered during the Late Wisconsinan Laurentide glaciation. Their higher portions projected through the ice as NUNATAKS. Wind-blown loess, in places over 2 m thick, was deposited during this period.