The Star of Courage is the second level of medals of bravery awarded to those who perform selfless acts of courage (courtesy Rideau Hall). 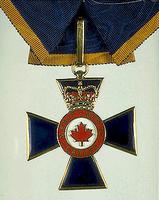 The Medal of Bravery is the third level of medals of bravery awarded to those who perform selfless acts of courage (courtesy Rideau Hall).

The Cross of Valour is the highest level of medals of bravery awarded to those who perform selfless acts of courage (courtesy Rideau Hall).
PreviousNext

Three decorations for bravery were instituted in 1972 to serve as a public expression of respect and admiration for persons who perform selfless acts of courage. The scale of awards reflects the degree of peril faced by the recipients.

The Cross of Valour, at the head of Canada's system of HONOURS, takes precedence before all orders and other decorations except the VICTORIA CROSS and GEORGE CROSS. It is a gold cross of 4 equal limbs, the obverse enamelled red with, at its centre, a maple leaf surrounded by a laurel wreath. On the reverse is the royal crown and cypher with the words "Valour-Vaillance." The decoration is worn at the neck on a red ribbon.

The Star of Courage is a 4-pointed silver star with a maple leaf encircled by a laurel wreath at the centre and, on the reverse, the word "Courage." The ribbon is red with 2 blue stripes.

The Medal of Bravery is a circular silver medal with a maple leaf centered within a laurel wreath on the obverse and the words "Bravery-Bravoure" on the reverse. The ribbon is red with 3 blue stripes. Recipients of bravery decorations are entitled to have the relevant letters placed after their names: CV, SC or MB.

Awards are made by the governor general with the advice and assistance of the Canadian Decorations Advisory Committee and the investigative resources of the police services.