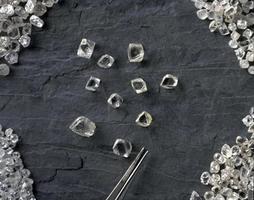 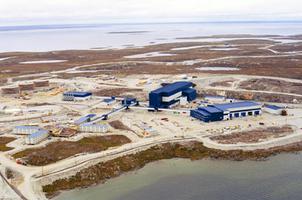 The Diavik Mine opened in 2002 some 35 km southeast of the Ekati mine, north of Yellowknife. Between them the two mines will produce about 10% of the world's diamonds, making Canada the world's third-largest diamond producer (photo by Jiri Hermann/courtesy Diavik Diamond Mine).
PreviousNext

Diamond is a crystallized form of carbon. While many varieties of diamond exist, they all have an isometric crystal structure. Diamond is very hard because the carbon atoms are very tightly packed and strongly held together. The vast majority of gem-quality diamonds used in jewellery are almost colourless or very slightly yellow. Fancy, intense yellow, green, orange, blue and pink diamonds are rare and very expensive (seeGEMSTONE). Bort is composed of minutely crystalline grey to black diamonds that cannot be used as gems but can be used in drilling; when powdered, bort is used for cutting and polishing. Carbonado is a compact, opaque, dark grey to black mixture of microscopic diamond, GRAPHITE and amorphous carbon and is extremely hard. It is a natural polycrystalline form of diamond that is also used for industrial purposes.

Gem-quality diamonds crystallize as octahedrons (8 faces), trisoctahedrons (24 faces), hexoctahedrons (48 faces) or a combination of these. Diamond owes its supreme standing among all the gemstones to 4 specific attributes. Its high refractive index permits it to be faceted in shallow cuts, so that all the light entering the stone is returned by total internal reflection. As well, its high rate of dispersion produces a large amount of "fire" from the splitting of white light into its colour components. It is the hardest substance (10 on the Mohs scale, and 8000 on the Knoop scale, which is a better way of measuring hardness for very hard materials); thus it can take a high polish and cannot be scratched by any other substance (though its tendency toward cleavage makes it somewhat vulnerable to a hard impact). Finally, it is often found in an essentially colourless state.

Other interesting properties of diamond are its extremely high thermal conductivity and low thermal expansion. Diamond is an excellent electrical insulator and is transparent to virtually the entire electromagnetic spectrum.

Canada's Diamond Production
The first discovery of diamonds in Canada occurred in 1991 at Point Lake near Lac de Gras in the Northwest Territories, 300 km northeast of Yellowknife. In October 1998 diamonds were mined in Canada for the first time, at the Ekati mine near Lac de Gras. Annual production at the mine began at 3 million ct per year and its expected annual average is 3 - 5 million ct. The mine's lifespan is estimated to be 20 years. The majority of the diamonds produced at Ekati are of gem quality.

In January 2003, a second mine, the Diavik, 35 km southeast of the Ekati mine, went into production. Production reached 1 million ct by May of that year and over its projected 20-year lifespan it is expected to produce 9 million cts annually, peaking at 11 million. Diavik began mining underground in 2010, with expectations of ceasing open pit mining in 2012, at which time it will become a completely underground operation. Canada's third mine, Jericho, is Nunavut's first. It opened in August 2006.

Canada's fourth mine, the Snap Lake Mine, has the distinction of being De Beers Diamonds' first mine outside of Africa. It is unique in Canada in that it is the country's first completely underground diamond mine. The mine began commercial production in January 2008 and was officially opened on 25 July 2008.

Ontario's first diamond mine, the Victor open-pit mine, began development in January 2006 and went into production in the spring of 2008. The value of the diamonds extracted at Victor, roughly $440 per ct, is among the world's highest. The mine is expected to produce an average of 600 000 ct per year over a 12-year lifespan.

In 2003, when Diavik went into production, Canada became the world's third-largest diamond producer, behind Russia and Botswana and ahead of South Africa and Angola. The quality of the stones varies, but the mines produce diamonds of similar value to those produced at De Beers mines in South Africa. Canada has become an important producer of natural diamonds: a large portion of northern and central Canada is underlain by a huge craton known as archon, which consists of rocks older than 2500 million years (seeGEOLOGICAL REGIONS). Studies of the global distribution of the diamond-bearing kimberlites show that these rocks are mainly confined to ancient cratons such as the one found in Canada.

Canada has a small but important diamond manufacturing (cutting and polishing) industry, with facilities in Sidney, BC; Yellowknife; Edmonton and Montréal. Aber Diamond Corp (now Harry Winston), co-owner of the Diavik mine, built a diamond sorting plant in Toronto. Traditionally, diamond sorting was conducted only in Antwerp, Belgium.

The Kimberley Process was initiated in May 2000 in South Africa to develop an international certification scheme for rough diamonds to keep conflict diamonds from entering legitimate markets. Canada played an important role in developing the initiative. Since the process's inception on 1 January 2003, Canada has been a leader in implementing it to control the trade in conflict diamonds. Canada has legislation in place to control the import, export and transit of rough diamonds.

Gem-quality synthetic diamonds, marketed as the "diamond alternative," are created using the HP-HT or CVD methods. They are produced in yellow, blue, pink or green, the colours caused by nitrogen impurities, boron, or irradiation. White - colourless - diamonds are also created synthetically. They are chemically and physically identical to natural diamonds, and even experts often cannot tell the difference with the naked eye. They can be distinguished by spectroscopy or x-ray.

The term "conflict diamonds" refers to rough diamonds used by rebel movements or their allies to finance conflict intended to undermine legitimate governments. They have been a crucial factor in prolonging brutal wars in parts of Africa. On 1 December 2000, the UN General Assembly unanimously adopted a resolution on the role of conflict diamonds. Although the wars in Angola and Sierra Leone have ended, the issue of conflict diamonds has not disappeared. Diamonds mined in areas of the Ivory Coast that are occupied by rebels still reach the international market. Diamond exports from Sierra Leone and Angola must have an official government-issued certificate of origin to be eligible for import by a UN member country. No exports of rough diamonds from Liberia may be imported by a UN member country.