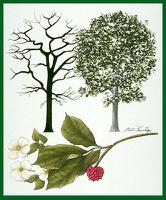 This tree, which prefers shade, is covered with bunches of red fruit and brilliantly coloured foliage in autumn (artwork by Claire Tremblay).

Dogwood (Cornaceae), family of perennial herbaceous plants, trees and shrubs, represented in North America by about 15 members of the genus Cornus. The genus comprises approximately 45 species, found mainly in northern temperate regions. Of the 10 species native to Canada, 2 are herbaceous, the most familiar and smallest species being Canadian dogwood or bunchberry (C. canadensis). It is very common in the boreal forest, but also occurs across southern Canada. This species has 4-6 large, white bracts resembling petals which attract insects to the dense flowerhead composed of small, greenish flowers. Its red berry-like fruit is edible.

Most dogwoods are shrubs or small trees; however, Pacific or western flowering dogwood (C. nuttallii), the Provincial Floral Emblem of BC since 1956, grows to 25 m. It flowers April-May, before the leaves appear; flowers form a head supported by 4-6 white or pinkish bracts measuring 10-12 cm across. This tree, which prefers shade, is covered with bunches of red fruit and brilliantly coloured foliage in autumn. The very hard wood can be used to make small items (eg, mallet heads, piano keys). Several dogwood shrubs are popular Ornamentals, growing easily in well-drained soil. 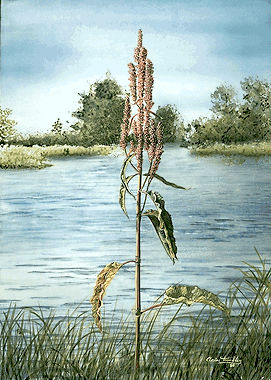