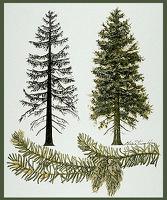 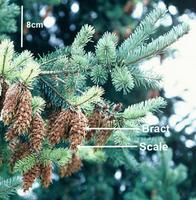 Douglas fir (Pseudotsuga menziesii) is an evergreen conifer of the pine family (Pinaceae). Six species of Pseudotsuga ("false hemlock") are recognized: 2 in western North America; 4 in China, Taiwan and Japan. Only P. menziesii occurs in Canada, along the West Coast, east into the Rocky Mountains and extending south to central Mexico. A coastal variety (var menziesii) may attain heights of 100 m and diameters of 2 m; an interior variety (var glauca) is smaller.

The leaves of the Douglas fir are evergreen, needlelike and 2-3 cm long. The cones are 5-10 cm long, have rounded scales and distinct, three-pronged bracts (modified leaves). Pollination occurs in early spring; seeds are shed in late summer or fall. Douglas fir resembles true firs, hemlocks and spruces but is most closely related to the larch. One of the most important timber species in North America, it is now planted in many regions of Europe. Canada's tallest Douglas fir, 94.3 m in height and 8.07 m in circumference, stands near Coquitlam, BC.