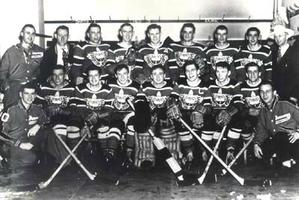 The Edmonton Mercurys won the gold medal in hockey at the Winter Olympic Games in Oslo on 24 Feb 1952. The final game was a 3-3 tie against the US. Canada's hockey teams did not win another until 2002, when both the men's and women's teams captured gold at Salt Lake (courtesy City of Edmonton Archives).

The Edmonton Mercurys took their name from the Edmonton car dealer and sponsor Waterloo Mercury. In 1950 the team was the Western Intermediate League champion. They represented Canada and won the World Championship title at London, England.

Seven teams in Canada applied to the Canadian Amateur Hockey Association to represent Canada at Olso in 1952. They were the Edmonton Mercurys, Winnipeg Buffalos, St Francis Xavier University, Trail Smoke Eaters, Noranda Copper Kings, Cornwall Falcons and Smith Falls Rideaus. An elimination tournament was considered, but because of the size of the country and the travel and expense involved, Edmonton was selected; the deciding factor was that they had represented Canada successfully at the 1950 World Championships.

A seven-week exhibition tour was arranged to acquaint the players with European clubs and their style of play. The success they enjoyed in Sweden was typical of their play. Two top-ranked clubs were defeated 8-0 and 8-1, while the middle-of-the-pack Hagfors were beaten 18-1. The exhibition schedule even extended to the eve of the opening ceremonies, when they were slated to play the US. The players were tired and the team unsuccessfully attempted to cancel the contest. But since all 10 000 seats in the stadium had been sold, the game had to be played. The Mercurys won 3-2, with the winning goal from Englebert (Dave) Miller, whose status was in doubt right up to one hour before Canada's opening game. (Miller was said to have played professional hockey in England, but in the end was declared eligible for the Olympics.)

Nine countries competed for the gold medal. Each was to play the others once in a round-robin competition. Two points were awarded for a win and one for a draw. A fear of inclement weather - three of the four arenas were outdoors - and possible postponements, along with the tight schedule, militated against playoffs. Any ties in the standings would be resolved by goal averages. Edmonton's first game was against West Germany. Canadian officials sought to postpone it, since King George VI had died February 6 and the state funeral was being held the same day as the game. The request was denied by Olympic officials, but as a concession the players were allowed to wear black armbands.

Canada defeated West Germany 15-1, with Miller scoring five goals, Bill Gibson four and playing manager Frank Sullivan three. The next game, against Poland, was played outdoors in a blinding snowstorm. Canada won 11-0, with George Abel scoring three times. Next was Finland, which used as many as four defencemen at the same time in a futile effort to slow down the Canadians. Edmonton outshot Finland 44-7 and won 13-3. Czechoslovakia was next. The Canadian strategy was simple - "thump the Czechs early and often." In the process, they were penalized 17 times, endured the boos of the crowd and won 4-1. European spectators and media were upset by the rough play of Canada and the US, calling them "rowdies," "Chicago gangsters" and "polluters of European hockey." The prime minister of Norway, Oscar Torp, sought to calm the situation, explaining that penalties helped cool players down by sending them off the ice for two minutes. At the time, the offending player could not return to the ice until his time had been served, even though his team was scored upon. Nor could the offending team ice the puck to relieve the pressure without the ensuing face-off being held in its own end. Both the Canadians and the US were advised by the International Amateur Ice Hockey Federation to tone down their rough play. Subsequently, when Canada defeated Switzerland 11-2, only one penalty was called. Meanwhile, the US was losing to the Swedes, Canada's next competitor, 4-2. Canada later eked out a 3-2 victory over Sweden even though they outshot them 36-9. Next, Canada beat Norway in an 11-2 victory.

The gold medal game was played against the US on 24 Feb 1952. Canada was two points up on the US and a win or tie would seal the gold medal victory. The Mercurys took an early lead of 2-0, but the US tied the game at the end of the second period. Don Gauf scored in the third period to regain the lead, only to have the US tie the game with two minutes remaining. The game ended in a draw. Canada's record was 7-0-1 for 15 points and the gold medal. The US received silver with 13 points and Sweden the bronze with 12 points. The Soviet news agency Tass argued that the final Canada-US game was fixed so that Communist Czechoslovakia could not finish second.

In 2002 at Salt Lake, the Canadian men's Olympic team of NATIONAL HOCKEY LEAGUE (NHL) players and the women's Olympic team wore a replica of the crest of the first-ever official Olympic hockey team - the 1924 Toronto Granites - on their shoulders. Both the men's and women's teams won the gold medal. Coincidentally, the men's team won their gold medal on the 50th anniversary of the Edmonton Mercurys' win.